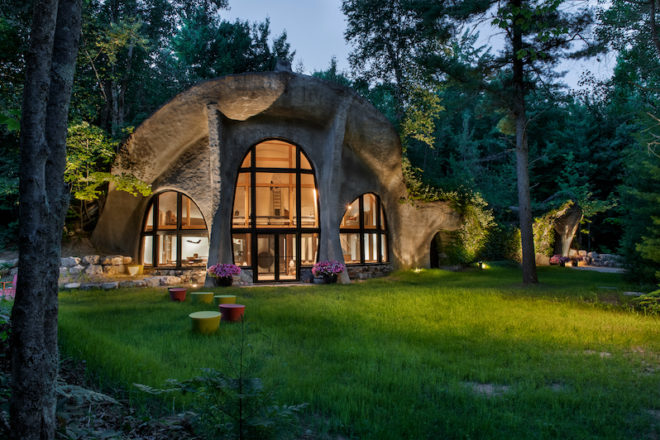 An art-residency program that’s starting this summer will add something decidedly new to the Door County visual-arts scene.

The Al and Mickey Quinlan Artist Residency will give artists an opportunity to live and work at the one-of-a-kind Dome House in Whitefish Bay. Albert “Al” Quinlan designed the home – so named because it comprises two domes built into the sand – in the 1970s. He envisioned a combination home and work space as he pursued a second career as an artist, but that vision was never truly realized. After just a few years occupying the property part time, Quinlan sold it.

One of Al’s daughters, Mary Grace Quinlan, bought the home with her husband, Kurt Wagner, in 2016. Quinlan said they did so to bring it back into the family, but at the time, they had no idea what they were going to do with it. Wagner said the idea for an artist-residency program literally came to Quinlan in her dreams.

“Mary Grace woke up in the middle of the night, and she said, ‘I know exactly what we should do with this house,’” he recalled.

Quinlan and Wagner approached the Miller Art Museum about partnering to create and administer the program. For the museum’s executive director, Elizabeth Meissner-Gigstead, the timing was perfect because developing a residency program was part of the museum’s long-term strategic plan.

“The whole concept of artist residencies brings so much to communities,” she said. “It’s an incredible contribution of culture to a place.”

This new partnership echoes a similar relationship from decades earlier. Quinlan said that her father was one of the original fundraisers for the museum when Gerhard Miller founded it.

“We wouldn’t be here today without Al Quinlan,” Meissner-Gigstead said.

The Al and Mickey Quinlan Artist Residency is a six-week summer residency that will be awarded to two mid-career artists in the fields of silk-screening, fine arts or photography – the mediums Al Quinlan worked in. One award will go to a Midwestern artist who will live and work at the Dome House. The other award will go to a Door County artist who will not live at the property, but who will work in the studio for the same period of time.

Wagner explained that they wanted to create an opportunity for collaboration between the artists, so although they may not actually work together on the same project, they can learn from each other and share ideas.

“I really hope that artists in Door County who need a studio will apply,” Quinlan said.

Community engagement is a big part of the program. Residents will be required to offer at least five hours of community outreach each week. Quinlan explained that it’s a way to honor the long history of the art community in Whitefish Bay and its spirit of outreach.

“They are very conscious about art and education and giving back to the community,” she said, and shared a memory of Whitefish Bay artists offering free classes when she was younger. Now, Quinlan said, there are about five Whitefish Bay artists who want to participate in the residency program, perhaps in informal mentorship roles.

“I think the [artists in residence] would benefit from the artists in the community who have a lot of experience and have their own studios and have a great knowledge about Door County,” Quinlan said.

Even beyond the formal community-outreach requirement, Quinlan, Wagner and Meissner-Gigstead all mention community engagement as an opportunity and a goal, describing it working in ways that benefit the artists in residence, artists in Door County and the larger community. It seems to point to a symbiotic relationship among a place, its people and the art they inspire.

All three acknowledge that Door County’s rich creative culture and the unique Dome House setting and architecture have much to offer artists.

“We think it’s a great place for someone to be close to nature and be inspired by the landscape,” Wagner said of the house.

Meissner-Gigstead said, “This is going to be a destination for an artist on their career path,” and she said that means good things for the community.

“Door County already is a destination market,” she continued, “and I think the residency will enhance that and broaden that scope. It puts Door County on a different playing field.”

Quinlan reflected that establishing the residency program feels like “coming full circle for us as a family. I think my dad would be thrilled. Mom would be over the moon.”

Quinlan said she hopes they may be able to expand the program to offer more awards in the future. Full details and application information are available at domehouseart.org. The deadline to apply for the inaugural residency is May 31.