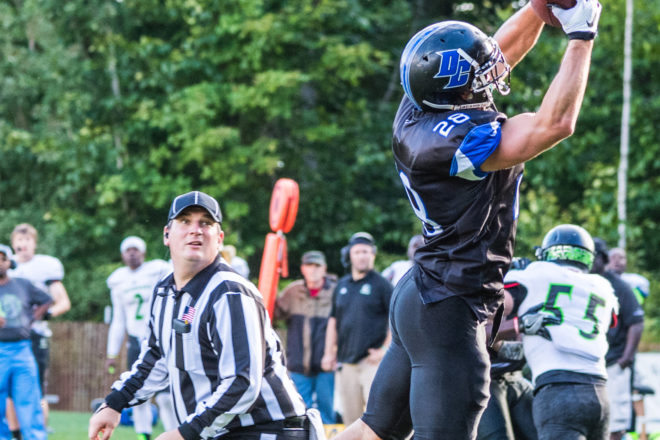 On Sept. 10, the Door County Destroyers hosted the Milwaukee County Chargers in the first round of the Mid-States Football League (MSFL) Playoffs. The game lived up to the hype with five lead changes throughout and a big defensive stop in the final seconds, deciding the victor.

The Destroyers jumped out early 10-0 and that’s when the chargers started fighting back. By halftime, Milwaukee County had taken the lead 13-10 and looked poised to bring home the first-round victory. A timely Destroyer defensive score in the third quarter brought them to within one heading into the final period. The defense of the Destroyers forced another turnover that led to an offensive touchdown and a 27-20 lead. From their own 10-yard line the defense of the Destroyers knocked down the final pass of the game, ending the Chargers hope for victory and, ultimately, their season.

The Destroyers next play on the road against the Racine Raiders on Sept. 17 at 7 pm at Horlick Field in Racine. For more information visit doorcountydestroyers.com.