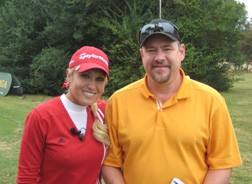 Mark Hill had the opportunity to meet LPGA Golfer Natalie Gulbis while playing in a tournament at Pinehurst #2 in the fall of 2009.

Years playing: My father taught me the game and my swing around the summer of 1970.

Any of the victories stick out in your mind: All of them bring to mind a situation that occurred during that particular round. During my second championship, I pulled my drive out of bounds on the opening hole to the right, carding a 6. I was fortunate enough to play the remaining 17 holes even par, scoring a 74 for the day. This past August, I scored one of my lowest rounds in tournament play when I shot a 73 on Championship Day.

Any other memorable golf experiences: In the fall of 2009 I was part of a four-man team that won a local qualifier in a tournament called the McGladrey. McGladrey was the accounting firm for the PGA and ran a magnificent tournament for a couple of years. Our four-man team went to Janesville Wis., and won the state sectional qualifier. That win put us at Pinehurst, N.C., where we were 1 of 41 national teams competing. Hanging around the Pinehurst Resort that Donald Ross orchestrated and being 14th after two days was breathtaking. Donald Ross created over 400 golf courses in his life but chose to live on Pinehurst #2, and I think he made the right choice. Playing courses #2, #4 and #8 and enjoying a beverage with the PGA President Jim Remy was unbelievable. But have the opportunity to meet and take pictures with Natalie Gulbis – Priceless (if you know what I mean). During that run in 2009, I had two huge shots that helped put us in that position. One of those two shots is almost always mentioned when our team gets together and reminisces.

Nicest Golf Course Ever Played: Locally it would be Oneida Country Club but overall Pinehurst #2.

Fantasy Foursome: Phil and I versus Tiger Woods and Randy Meyer. Phil handles Tiger and I take care of Randy Meyer, with ease – Hey, you said it was fantasy! My favorite foursome would be playing with family, enjoying a round of golf with my Dad, Mom, Brother or children seems to create a fond memory.

What’s in the bag: Driver is a TaylorMade R-7; three wood is a Ping tI/ZRI; five wood is an TaylorMade R-9; I carry a TaylorMade hybrid three or 19º loft; my irons are also TaylorMade RAC OS II; wedges are Titleist Vokey 52º and 58º; I putt with a Bobby Grace Design made by MacGregor, with an oversized grip; and my usual choice of ball is Titleist Pro-V 1x.