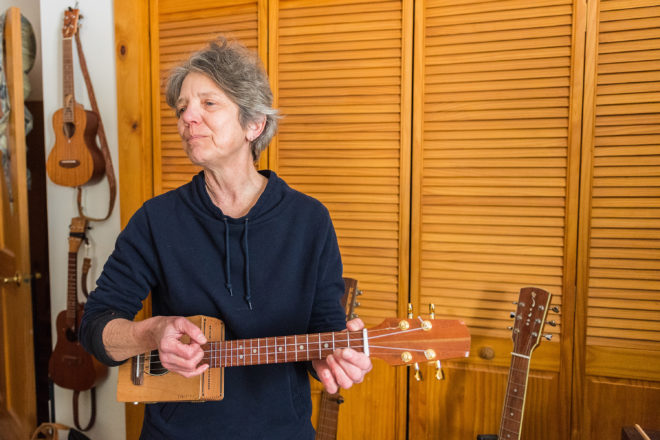 “It’s easier to say the ones I didn’t make,” Pat Webster said, standing in the center of a bedroom-turned-showroom in her Sturgeon Bay home, where meticulously detailed stringed instruments hang from the walls, rest on tables and shelves, and sit on guitar-stands ready to be played.

She has built all of them, save for a few she is repairing for friends. They are part of a 100-instrument portfolio that includes the dulcimer (her first project, built in 1985), mandolin, acoustic and electric guitars, ukuleles and the Medieval-era hurdy gurdy.

This decades-long hobby has always been just that, allowing Webster a reprieve from her 27-year career at the Sturgeon Bay Department of Motor Vehicles, from which she retired in 2011.

“At work you had all these people and all these things going on and multitasking and everything changing,” Webster said. “And when you’re working on this, it’s one little thing and you can focus on it for a couple of hours. What a nice difference.” 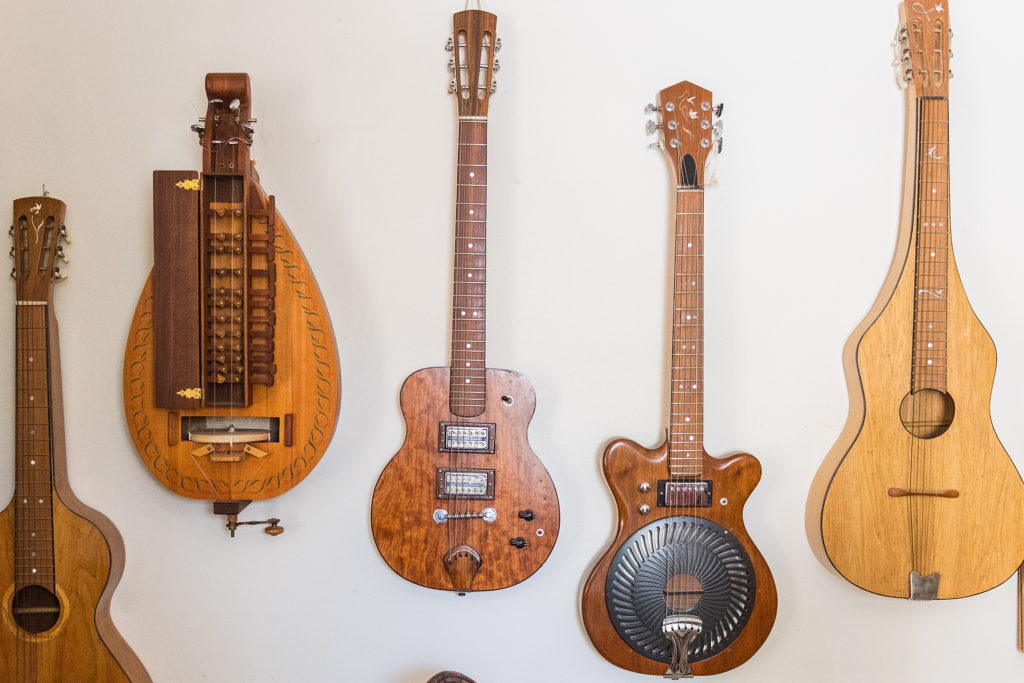 Webster’s earliest instruments were built using found material – scraps of mahogany left over from the dance floor of the luxury Palmer Johnson yacht La Baroness, parts of an old maple bed frame, and a segment of PVC sewer pipe.

Her interest in music dates back to her teenage years, though Webster will be the first to admit her dexterity with woodworking, despite a lack of formal training, preceded her true guitar-playing abilities. Her introduction to guitar by her mother was informal and atypical, as her mother came of age during the Hawaiian music craze of the 1930s.

“I was maybe 14 years old and I said, ‘Hey mom, can I play your old guitar?’ and she said, sure, here’s how you turn it,” Webster said, indicating the horizontal position typical of Hawaiian guitar playing. “And it wasn’t tuned like a regular guitar, it was tuned to slack key guitar and when she played she played it on her lap with a bar and she showed me, ‘This is how you play guitar,’ and I was like no, that’s not how The Beatles play their guitars. That’s all she could show me so I just started playing on my own and I played for a long time.”

Until fifteen years ago, when she made a trade with Russ Fairthorne, of Door County Music Company – she repaired one of his guitars, and in return, he gave her traditional guitar lessons. She now employs these newfound skills on the instruments that leave her home (she also sells them at Door County Music Company, where “King of Country” George Strait’s nephew bought one) and more recently, with the Door County Ukulele Society.

“I never met a uke until I met one of the uke club members,” Webster said. 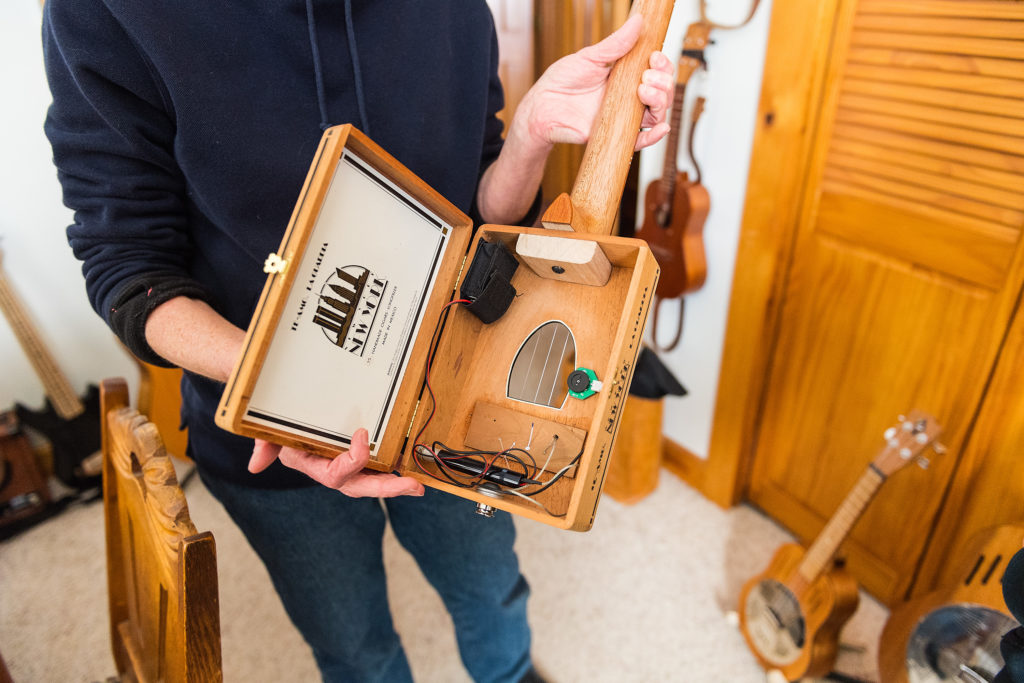 That was five years ago, when a ukulele society member saw her instruments in Fairthorne’s shop. They got together to jam – he on ukulele, she on dobro, guitar and banjo – and he quickly convinced her to create a ukulele. Two weeks later, she had a cigar box uke ready to go and, after 20 years of making instruments in her basement woodshop, a group to share it with.

“This is pretty much what I’ve been doing is ukes,” Webster said. “It’s a whole aspect that I’ve never had before, having these but having other people to enjoy them with and playing together and singing together. What a huge thing, it’s just such a fun part of all of this.”

Webster also generously shares her knowledge of instruments with aspiring luthiers. Tom Mulinix, who leads the recently formed guitar club at the Boys & Girls Club of Door County, credits Webster for coaching him on how to build guitars. He now uses that knowledge to make cheap guitars playable for kids in the club.

“Like good artists, she sees beyond what something typically is and elevates it to artistry,” Mulinix said.

This summer, Webster will help launch a pilot program teaching ukulele to Boys & Girls Club members. In the meantime, she will keep adding to her vast collection of handbuilt instruments, with a thankful nod to her husband, Bruce.

“He lets me do this, which is very nice,” Webster said. “He doesn’t have a problem. He said once that he’d rather see 80 guitars than 80 cats. We’re on the way there.”

Luthier Pat Webster found this plate at a rummage sale, and put it to use on a resophonic guitar. Photo by Len Villano.

Mother of Pearl inlays on a resophonic guitar. Photo by Len Villano.

It took Pat Webster fives years of studying electric guitars before she felt confident enough to construct one. She has made dozens more since then. Photo by Len Villano.