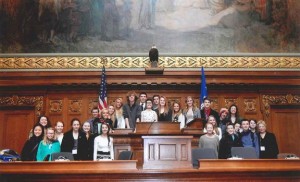 Door County YMCA Youth in Government (YIG) participants descended on the State Capitol in Madison from February 7 to 9, 2014. YIG gives students the opportunity to study the law-making process through active participation.

Door County was well represented in the executive branch as Izzy Hitzman served as Youth Lieutenant Governor and Mary Barlas served as Youth Secretary of State. Both were re-elected to the same positions for the 2014/2015 school year.

All Door County delegates participated in the Model Legislature. Bills passes in two houses were eligible to be signed or vetoed by the Youth Governor. Delegates whose bills were signed by the Youth Governor were Chelsea Lauder, Jenna Seiler and Maggie Hartman. Lauder’s bill made it mandatory for every public high school in the state of Wisconsin to require a personal financial literacy class for graduation. Seiler’s bill was to allow juvenile representation during police interrogations to prevent wrongful convictions. Hartman’s bill involved installing ignition interlock devices in all vehicles in Wisconsin to help eliminate drunk driving.

Maggie Hartman received the Outstanding Statesman of the Red Assembly. This award is given to a delegate who stands out in his or her program area and exemplifies the YMCA’s core values of honesty, respect, responsibility and care.

Mary Barlas, Alyssa Dantoin, Alec Fischer and Izzy Hitzman were selected by peers and advisors to attend the YMCA Youth Conference on National Affairs held in Black Mountain, North Carolina. Only 25 Wisconsin delegates are able to attend this conference.

The Door County Delegation won the YIG Cares Award. This award is given to the delegation that collected the most items to put toward the YIG Service Project. This year’s project benefited Porchlight Inc. a Dane County homeless shelter. Door County has won this award every year since its inception three years ago.