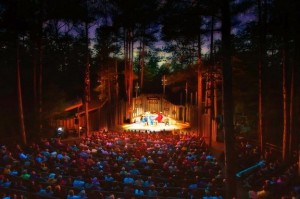 “The name ‘American Folklore Theatre’ communicates connotations about our focus that are no longer accurate.”

The decision has been a long time coming for the award-winning Door County troupe. Several years of serious consideration by their Board of Directors, management, cast, crew and outside advisors took place.

The company originally began as The Heritage Ensemble almost 45 years ago, founded by the University of Wisconsin. The group reorganized and changed its name to American Folklore Theatre (AFT) when it separated from the university and incorporated as a non-profit performing arts company in 1990.

Over the past 25 years AFT has evolved from a story-telling and concert-centric ensemble to a full-fledged theater organization that primarily focuses on the creation and presentation of original full-book musicals. Some of its shows, such as the hit comedy Guys on Ice, performed in dozens of theaters coast to coast.

“Our mission has not changed in any way. We will continue to produce original family-friendly musical theater that celebrates Midwest culture. The new name will better introduce the company to the next generation of patrons and creative collaborators and will better communicate and celebrate who we are and the art that we create,” stated Artistic Director Jeffrey Herbst.

The change, which will coincide with AFT’s 25th anniversary in 2015, has been a part of its long-term strategic plan for the past seven years. While people who know and love AFT are comfortable with the name “American Folklore Theatre,” the company has found that it has drawbacks.

“The name ‘American Folklore Theatre’ communicates connotations about our focus that are no longer accurate. In some important subliminal ways, the name can even work against us – particularly in attracting new audiences and potential collaborators that are unfamiliar with us. Our unique mission and creative ‘pipeline’ depend on attracting new artistic collaborators that ‘get’ who we are and what we do,” added Managing Director Dave Maier.

“People who aren’t familiar with us may assume ‘folklore’ means we’re a bunch of amateur banjo pickers in suspenders singing to kids about Paul Bunyan,” said AFT Co-Founder Doc Heide. “Nothing could be further from the truth. We’re fully professional. Our shows are original book musicals about Wisconsin culture that enthrall people of all ages. We know this change may be hard for some of our fans, and hope they understand that it’ll help keep us vital and relevant for decades to come.”

“We’re at a stage in our development similar to 1990, when we transitioned from ‘The Heritage Ensemble’ to ‘American Folklore Theatre.’ It’s again time for a new name that doesn’t hold us back – that helps us succeed. So, after much careful thought – and some nostalgia – we know it’s time to take this significant step,” added Herbst.

While the company has strong contenders for a new name, they are looking to the community for their input. Submissions for names can be sent to [email protected] through Feb. 14.