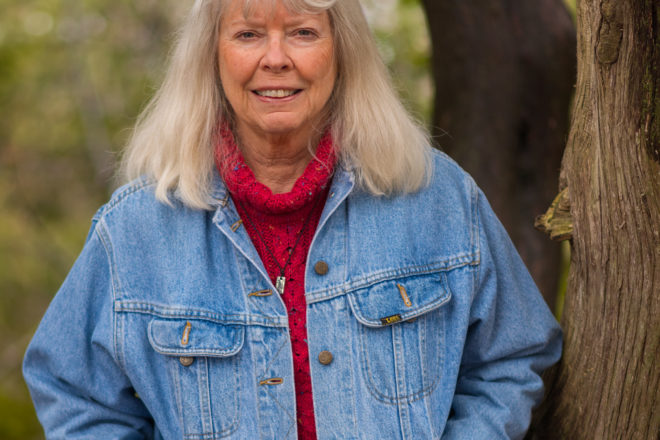 The late Pulitzer Prize-winning American writer Galway Kinnell defined a poet as “somebody standing up…and saying, with as little concealment as possible, what it is…to be on earth at this moment.” Sharon Auberle, Door County’s new Poet Laureate, feels her philosophy of poetry is best summed up in his words.

Auberle read her poem “A Thousand Miracles” at the Door County Board meeting on March 28, officially launching her tenure as Poet Laureate, a two-year term extending to April 1, 2019. She is charged with “promoting the reading, writing, and enjoyment of poetry in the county.”

Born in Ohio, Auberle lived in a variety of places, from the South to the Southwest, and from Appalachia to the Chicago suburbs where she began dreaming of moving to Door County. After living in Flagstaff, Arizona for 17 years, she realized her goal with a move to Sister Bay in 2008.

She began writing during her high school years, keeping journals since she was 14, the first “the little kind with a lock and key,” she said. But she had less time for her poetry when she was busy raising her family, for a time as a single parent.

And now she enjoys the thriving poetry community in Door County, “alive with poets willing to share their truths and lives” and finds “the inspiration, encouragement and support in this lonely endeavor of writing invaluable.”

The late Norb Blei was instrumental in her development as a poet. After Auberle took his writing classes at The Clearing, he asked to publish her first book, Saturday Nights at the Crystal Ball.

Following were her book Crow Ink and a work co-authored with Ralph Murre, Wind Where Music Was. Her honors include first place in a Wisconsin Fellowship of Poet’s contest for her poem “How to Get Through a Day When All the Talk Is of War” and the publication of her poem “Prayer for Village Earth” in the anthology Woman Prayers, appearing on the same page as words by Mother Teresa.

She has taken writing workshops, including those with Wisconsin Poet Laureates Max Garland and Bruce Dethlefsen, and occasional university classes.

Auberle characterizes her approach to writing as haphazard.

“An idea comes to me, a first line, perhaps, and I write it down” in her journal. Or she might be “inspired by, or touched by, a song lyric or a news story, particularly a human interest piece.”

She believes that a poem can put a reader in other people’s shoes, a necessity “before we can understand their lives even a little bit,” she said. “If we can step for the briefest of moments into their fears, their pains, and their joys, too, perhaps we will develop compassion, understand them a little more.

“It’s the same for the earth. If we can feel compassion for the smallest place, for a river, or a particular creature, then we may learn to love it, and if we love it, we will want to save it. And now, more than ever, that is absolutely vital.”

While Auberle is praised for her poetry, she is also a talented photographer. She never realized how her art and poetry complement each other until her artist/writer friend Kathy Stanaszek pointed that her painting and writing “feed each other.”

“Sometimes poetry is in the ascendant,” Auberle said of her own work, “sometimes the photography, but they do, indeed, feed each other.”

Self-taught, Auberle has learned from her experience with cameras, using digital techniques to create “photo-paintings.” Two self-published works, The Book of Summer Hours and EVEry Woman, combine her images with her poetry.

In addition, she supplied photo-paintings for Alice D’Alessio’s poetry book Praise the Undaunted, and for Jeanie Tomasko’s Sharp as Want. Auberle and Tomasko collaborated on a series of poetry “postcards.” Their next project requires each to create 10 pen and ink sketches, both writing poems for the other’s drawings.

Auberle’s photography has appeared in a number of juried shows, including Cheryl Stidwell Parker’s Annual Portrait Show and shows in both the Miller and Hardy galleries. In 2015 she received the Bonnie Hartmann Award for Outstanding Creativity for a multimedia piece.

The response that Auberle has received after being selected as laureate has been “heart-warming and inspiring,” she said. She has heard from many people on Facebook, even former high school classmates and friends from the other places she has lived.

Her plans for promoting poetry in the county include planning workshops and readings for beginning poets, especially in those parts of the peninsula that have less of a poetry presence. Because of her own interest in combining verse with photography, she hopes to create opportunities for pairing poetry with other art forms, including music, photography, dance, painting and sculpture, because she feels these pairings enhance the written work. And she is even considering pairing poetry with food, organizing “poetry potlucks.”

Auberle’s poetry, along with a variety of other postings, may be found on her blog Mimi’s Golightly Cafe, for peace & the planet: connecting through the arts at sharonauberle.blogspot.com.

The calls of geese awaken me

this morning, their plumage colored

Snow is melting in the forest,

moist breath of Spring sighs through

in the western sky convince me

that winter has not surrendered

and I must yet restrain this impatient heart

from some foolish Spring thing, though

the lonesome echoes of geese soften me