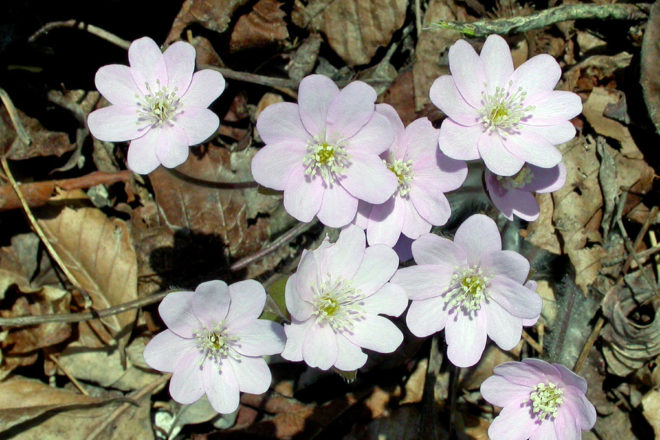 A very small wildflower genus with gigantic popularity will soon be carpeting many of the deciduous woods of eastern Wisconsin. Its genus name and common name are the same, Hepatica. Even though Gray’s Manual of Botany refers only to the trailing arbutus as mayflower, many people mean hepaticas when they speak about mayflowers.

I don’t recall where I first heard the name mayflower in reference to hepaticas but it may have been from my mother. Gray’s Manual lists two species. Acutiloba, having pointed leaf lobes and bracts, favors dry to medium woods with limey soil. Americana, found to have rounded leaf lobes and bracts, is more likely to grow in acid soils. However, both do nicely on shaded slopes, along streams and in rocky terrain where the woods are rich in leaf mold and both have been found existing very well in the same woods.

The name liverleaf, used by some people, is well chosen because its genus name, Hepatica, is related to the word liver. Hepaticus (Latin) pertains to liver as does the Greek word, hepar. Examine a leaf and you will see it’s liver shape. Last year’s leaves, fleshy, leathery, maroon to rusty-olive, lie matted on the forest floor as the new flowers unfold. New leaves, bright green, fuzzy and heart-shaped at the base, make their appearance as the flowers wither.

It was Sunday, March 22, 1987, that we headed into the woods looking for any sign of spring. We hadn’t gone more than 75 feet from the east side of the house when Charlotte let out a “whoopee!” that you could have heard in Jacksonport. The hepaticas were in bloom already.

There, nestled in a tiny hollow on the south-facing slope of the glacial moraine, were five fully opened “mayflowers,” delicate pastel purple, waiting for their first insect visitors. The air temperature was 56 degrees F. Wondering what the soil temperature was I went back into the house to get my darkroom thermometer which I could insert into the ground.

Much to our amazement the soil temperature a few inches from the flowers read 63 degrees F. Only 50 feet away, on the north side of the moraine, the soil temperature was 45 degrees F., 18 degrees colder. Now you know where to look for your first wildflowers of the year, on the sun-warmed south slopes of the woods.

Due to the prevalence of lime soil in Eastern Wisconsin, hepaticas are extremely abundant here. Ohio includes these wildflowers on their rare and endangered lists. Quite a few European countries also enjoy these very same plants. However don’t look for hepaticas in countries such as England, the Netherlands or Greece. They are rare and protected in Germany and Switzerland.

The range of these flowers is extensive stretching from northern Florida and Alabama, north to Nova Scotia and Manitoba and west into Minnesota. They also inhabit Alaska. A different species, H. angulosa, having large white, blue or reddish flowers, is native to Hungary.

It’s amazing how the extremely tiny seeds of a wildflower such as the hepatica could have spread through the years, following the last glacier, to grow in so many hundreds of square miles of woods. Researchers have determined that the primary spreader of these and other extremely small seeds is the lowly ant! The small, dry, thin-walled container of seeds on many plants, such as the mayflower, is called the achene (pronounced a-KEEN). At the base of the achene on the hepatica is an oily swelling that is very attractive to the ants. The ants in turn also distribute the seeds during their “pilfering.” Scientists have concluded that this distribution of seeds amounts to between 15 and 30 feet per year.

Each spring Charlotte and I enjoy looking for different colors of hepaticas in our woods. They range from nearly pure white to pastel shades of blue, pink and purple. The deep blues impress us the most while the rich pinks appear to be the rarest.

It is nearly an insult to tell people that hepaticas have no petals. Instead they sport showy sepals, which are petal-like. Then, examining the plant in more detail you will discover three tiny un-lobed leaves immediately below the colorful sepals, which are often mistaken for sepals. You will also find that a short flower-stalk, or peduncle, separates these leaves from the flower.

The blossoms of these vernal favorites close at night then open again the next sunny or bright day. Densely overcast days will find them closed. Study several clumps of them daily and try to determine how many days one flower remains open. Their odor is faint but sweet. There are those wildflower devotees who claim that the sweetest-scented hepatica clusters this year will be just as sweet next year. 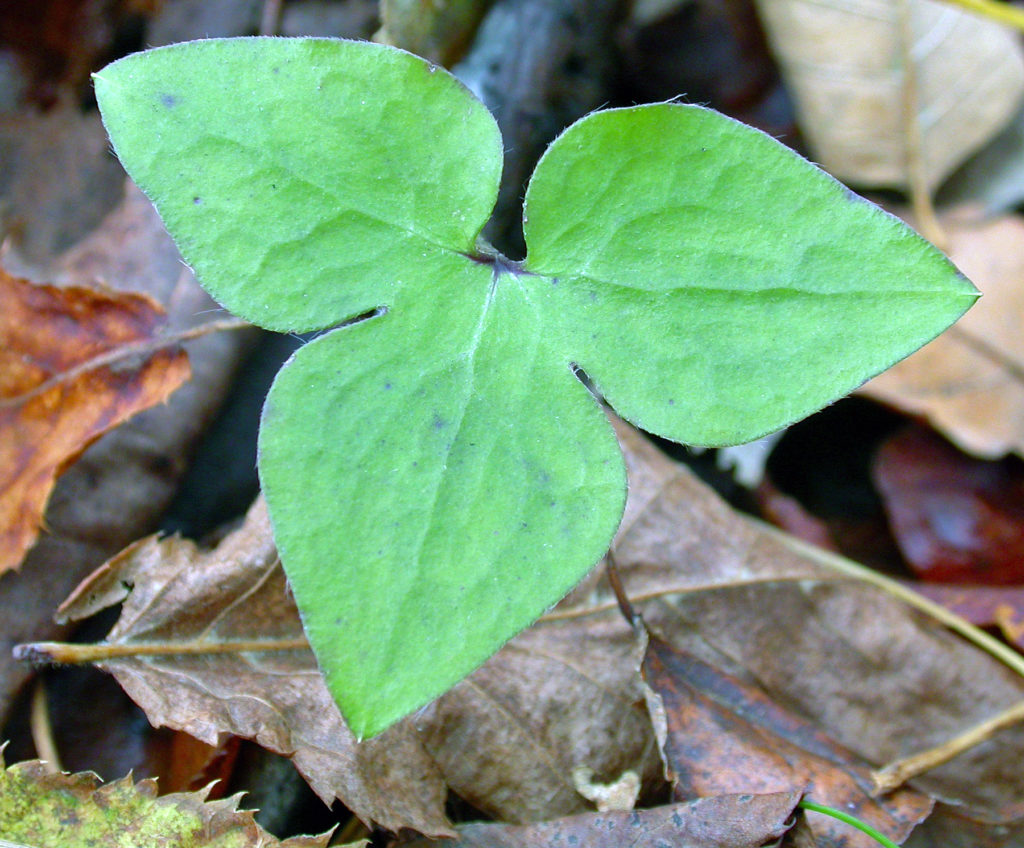 The sharp-lobed species of hepatica has pointed leaves. Photo by Roy Lukes.

Hepaticas are worthy of more praise and study. In fact its entire family, the Crowfoot family (alluding to the leaf shape), is one of unusual beauty and includes more than 30 species of buttercups, meadow-rue, anemone, clematis, delphinium, marsh marigold, columbine and baneberry.

I’ve always been most impressed with people who maintain constant ties with the soil and plants 12 months of the year. Come spring, before their outdoor gardening begins, they will bring twigs of balsam poplar, moosewood, tamarack or wild fruit trees indoors to force them into leafing out or blossoming. Their constant bond with wild plants will extend well into fall with a few twigs of witch hazel nursed along indoors to their delicate yellow blooming stage.

I would be the happiest man alive if all elementary and secondary curricula, public and private as well, would make it mandatory for every student during every year of their schooling to learn something about plants, wildflowers, vegetables, flowers, the soil and the wonderful art of growing, caring for and enjoying the flowering world.

Even though its music is soft and delicate the message of this wildflower parade comes through loud and clear. The tiny size of these spring ephemerals marches in step with towering enjoyment for those who wish to find them. Once found, never let them go. Do everything in your power to preserve forever this wild garden of unmatched beauty.