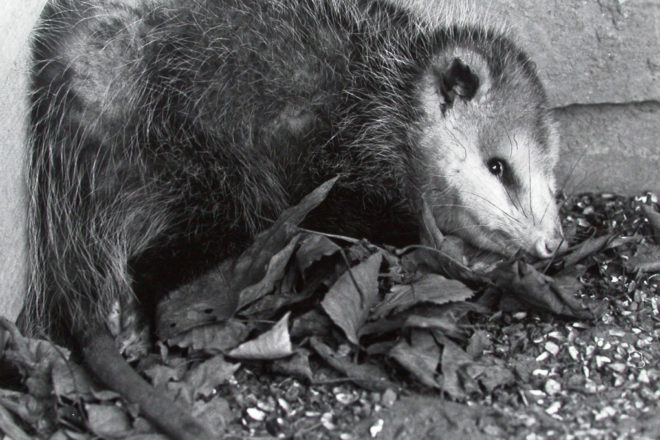 This cowering opossum was caught near our home and let Roy take its photograph. Photos by Roy Lukes.

An automobile trip at this time of year, no matter how short it may be, does not begin without thinking, “Watch out for deer!” We drive a little more slowly in certain areas so as not to end up with “grilled venison.”

As downright impossible as it is at times to avoid automobile-animal collisions, simply slowing down 5 or 10 miles per hour and being extra alert can spell the difference between having and not having such an unfortunate experience.

During spring and fall bird migration, when there will frequently be many birds feeding on weed seeds along the roadsides, we also cut way down on our driving speed.

Even though neither of our home dictionaries lists the word “roadkill,” I take it to include primarily wild, unfenced animals that have been killed by unsuspecting people driving automobiles, trucks and other vehicles. If one were to include moths, butterflies, snakes, frogs, turtles, etc., the total annual number of casualties, statewide, would surely run into the billions.

Recently we’ve seen a lot of dead deer, cottontails, squirrels, raccoons and skunks along the roads, but another mammal included among the fatalities has captured our interest:  the opossum. Their unfortunate habit of being so drawn to carrion, other roadkill, frequently leads to their death.

Even though I have seen quite a few live “possums” in our part of the county within the past 30 years, my first really close encounters with these nocturnal creatures occurred in Oklahoma during the early 1950s while I was in the Army. We came across quite a few of them during our nightly field exercises with the cannons, and it was then that they proved to this Doubting Thomas that they really excelled at playing dead.

All of my southern Army buddies referred to these unusual animals as polecats. Upon surprising one of them it would fall on its side, close its eyes, let its tongue hang out of its partly opened mouth and simply behave as though it either was badly injured or even dead. 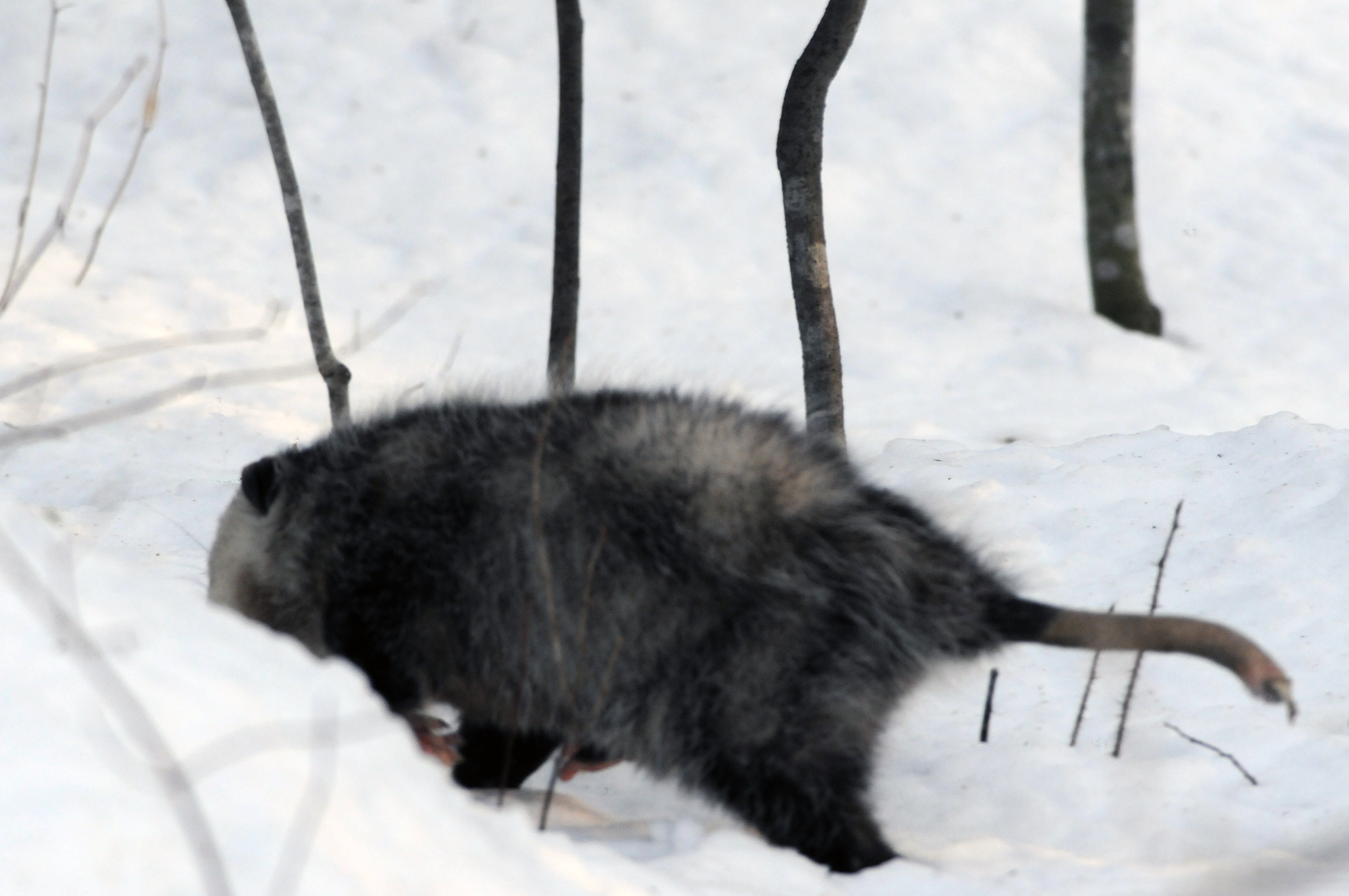 A possum that lived through extremely cold weather showed the fleshy end of its tail had frozen off.

I did resent the unnecessary tormenting some of the guys, apparently thirsting for a little excitement, inflicted on those poor animals. Obviously that manhandling had little to no effect upon those stalwart opossums because a short time later, after the novelty wore off, the “tough-as-nails” slow-moving marsupials had vanished.

Scientists, in studying the opossum in its outwardly catatonic state, learned that its pulse and heartbeat had also been considerably reduced. I wonder if this fascinating display might fall under the condition referred to as thanatosis (than-a-TOE-sis). This is a state that in some respects resembles shock and is characterized by cessation of all voluntary activity and usually by assumption of a posture suggesting death. This also occurs in various insects, such as beetles, when disturbed.

These highly adaptable animals have been steadily emigrating northward and westward in the United States since the early part of the 20th century. They were first recorded in southern Wisconsin about 150 years ago and now they have moved well into the central and eastern parts of the state. Our first record of a Door County sighting was back in the early 1980s.

Another of their surprising movements has been to the Pacific coastal region. To give you an idea of their abundance there, more than 1,000 are picked up by authorities in Hollywood in a year, and opossum roadkills there are very numerous.

Their rather silly-looking grin, when the animals are playing dead or threatening you, reveals 50 teeth, the most of any Wisconsin mammal. Other fascinating features are its hairless, prehensile tail and its front feet that are relatively fleshy, wide, have five digits and remind one of a human’s hand. One digit, the hallux, is clawless and, like a thumb, is opposable.

The animal scientists tell us that the opossum has very low intelligence, characterized by a primitive brain. Obviously they make up for this lack of intelligence with an exceptional sense of smell, by being extraordinarily prolific and tough, by being extremely adaptable and by possessing an amazing capacity for recovering from broken bones. We can tell if an opossum has lived through a frigid winter by looking at the end of its tail. Often a few inches of the fleshy end have frozen off leaving a thin bony core.

The incredible feat of the newly born young, smaller than honeybees, finding their way across about three inches of skin covered by coarse hairs to the female’s pouch (her marsupium) is enough to lead a person to admire them.

Eight newborn opossums will fit into one teaspoon. Of the 18 or more that are born, it is only the lucky 10 or so that are able to attach themselves to the female’s teats and, remaining there for about eight to nine weeks, will survive. By eight weeks they are the size of a mouse and the litter has been reduced to seven to nine, and by three months they must fend for themselves. Amazingly, these hardy animals do not hibernate.

Diet is determined by availability – they will eat practically anything. Persimmons in the South are one of their favorite foods. The one I surprised and was able to photograph along the east side of our house foundation was feasting upon sunflower seeds thrown there for the birds.

Being our only marsupial – uncommon at most and virtually harmless to humans, nocturnal and totally unnoticed by most people – these dauntless creatures deserve our respect. We must hope that they don’t become numbered among the “flattened fauna” along our roadsides.