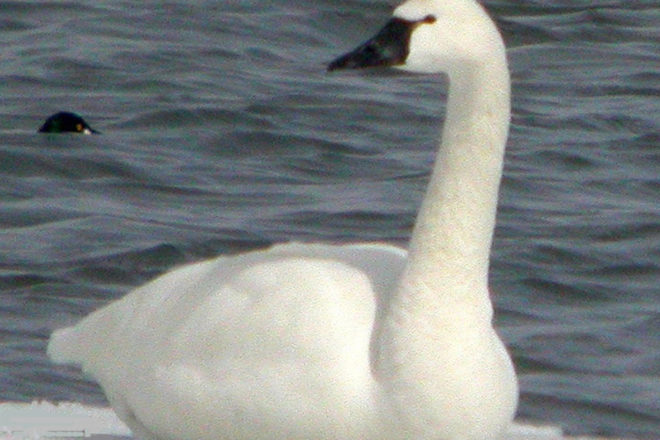 The top surface of this tundra swan’s beak shows its concave shape. Photo by Roy Lukes.

Few native bird species have provided us with more exciting watching and adventures during the past 45 years than the tundra swan, formerly called the whistling swan because of the whistling sounds made by their wings when the birds were in flight. Fortunately the rather wide migratory zone through much of Wisconsin allows many people to enjoy seeing these magnificent birds on their way to the far north.

Every winter we see a few tundra swans that remain along the Lake Michigan shore, but most of them spend the cold months in the area of the Chesapeake Bay south to Currituck Sound in North Carolina. This is on the Atlantic coastline laced with mile after mile of salt marshes, rivers, sounds and inlets.

Study has revealed that these large, strong fliers incorporate a considerable dogleg into their journey. Generally they make the entire trip from the mid-Atlantic seaside with only one major rest and feeding stop. Reports have come in from southern Wisconsin during the first week of March showing some swans have arrived.

Many inland lakes are still frozen so this will reduce areas for them to rest. These powerful birds weigh up to 18 pounds and have a wingspan of about seven feet. They cruise at from 30 to 50 miles per hour at an elevation of approximately 6,000 to 8,000 feet. The last leg of their arduous, nonstop flight will take them 30 hours or longer to complete. 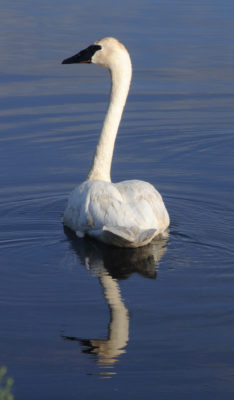 This trumpeter swan’s beak has a straighter upper surface. Photo by Roy Lukes.

If the large white birds you see migrating through your area have black wingtips, you’re not looking at tundra swans. These could either be snow geese or white pelicans. Check these species in your field guides.

Tundra swans are all white with the exception of the young from last year, who still have some gray on their necks and heads. From close range you’ll see that all of the swans have bills and feet that are black. Their heads will often be held very high and their necks quite straight as they rest upon the water or land.

Most of the adults have a small elongated patch of yellow on their beaks just in front of their eyes. It is lacking in young birds and also missing in some adults.

Like ducks and geese, swans also lose all of their flight feathers at one time during nesting and are flightless for four or more weeks. During this time, referred to as their flapper stage, thanks to their powerful legs and feet they are able to swim, find food and hide from their natural predators.

By the time their young are capable of flight, so too are the adults. With their flight feathers grown back to normal, they soon are winging their way to their wintering grounds near the Atlantic Coast. Many will rest along the Mississippi River in western Wisconsin, sometimes well into November if the weather permits. I remember driving home from visiting friends in St. Louis in early November and seeing a huge flock of tundra swans on the Mississippi north of La Crosse.

Geologic history tells us that, following the southerly re-advancement of the Wisconsin stage of the glacier that produced the famous “Buried Forest” at Two Creeks around 11,400 years ago, a lake referred to as Glacial Lake Oshkosh was formed. The lake was dammed on the north by the receding glacier.

Migration routes are faithfully followed year after year, century after century, the young birds learning from the older birds. It may be that these unusual routes taken by the birds from their wintering territories were at one time strongly influenced by the edge of the glacier as well as vast water courses, such as Lake Oshkosh, which had been formed by the melting glacier. 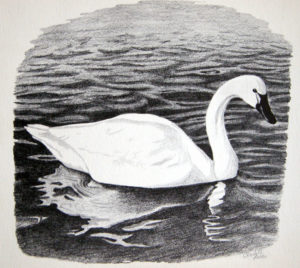 Charlotte did this drawing of a tundra swan for one of Roy’s earlier books about birds. Image by Charlotte Lukes.

Tundra swans mate for life and breed primarily north of the Arctic Circle in the tundra from northeastern Alaska to the Hudson Bay. Don’t think for one moment that these swans do not experience hazards along their routes. As an example, a powerful rain and hailstorm in the western counties of Wisconsin during the 1954 spring migration caught many swans while in flight. Cy Kabat, who was at the time chief of wildlife research for the Wisconsin Conservation Department (now the DNR), reported at least 25 swans were found dead, many having multiple bruises over their heads and bodies. Apparently they had been struck by large hailstones.

Old records from the Hudson’s Bay Company in Canada reveal that between 1823 and 1880, about 108,000 swan skins were sold to businesses in London, England, where the feathers were fashioned mainly into the making of ladies’ hats.

We have made many trips to see resting swans and other waterfowl that settled into the wetlands between Black Creek and Shiocton about 20 miles west of Green Bay. There are several nice viewing areas north of State Highway 54. It is a good idea to bring binoculars and a spotting scope as sometimes the birds can be a quarter mile away from the road.

Many years ago the trumpeter swan was endangered and found only in parts of the northwestern section of America. Reintroduction efforts in Minnesota, northwest Wisconsin and Upper Michigan have resulted in wonderful gains in their population. A favorite place that Roy and I often visited was the Seney National Wildlife Refuge where many trumpeter swans nest. They have a seven-mile one-way drive that offers good close observation of these magnificent birds as well as other waterfowl.

Both species of swans look very similar. Careful observation will show that the tundra swan beak’s upper surface is slightly concave while the trumpeter beak is very straight from forehead to tip. The other swan in our area is the mute swan and that species is non-native, brought to this country years ago from Europe. It is a year-round non-migratory resident and breeds in several areas in Door County. The major difference is that its beak is quite orange and the adult male will sport a black “knob” at the top where it meets the forehead.

Take advantage of this brief time of year to find places to see these magnificent tundra swans and listen to their conversation as they rest and feed in Wisconsin. Learn what you can do to help preserve precious wetlands so you may enjoy these migrating birds that whistle in with advancing spring every year.