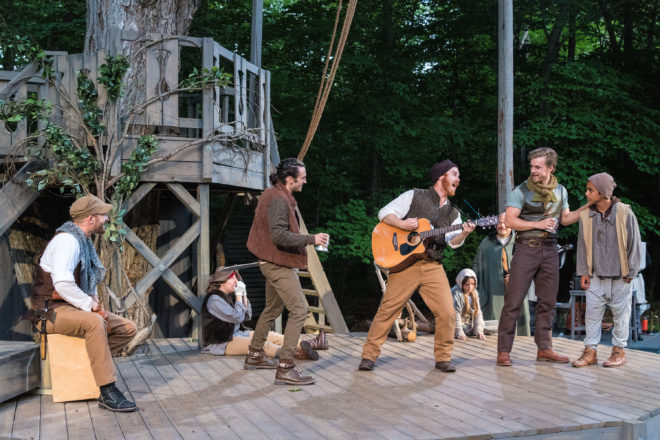 This season, Door Shakespeare brings David Farr’s The Heart of Robin Hood to the stage in the forest of Björklunden. The show runs in repertoire with Shakespeare’s Twelfth Night, through Aug. 19. Photo by Len Villano.

When I came to Door Shakespeare five years ago, I knew the organization held a wealth of potential. The staff, volunteers and community partners were all poised to see the theater into a new era. Many artists were willing to take a chance on the adventure and lend their talent to envisioning a new future for the theater. I was fresh out of my graduate program at the Royal Conservatoire of Scotland and firmly believed that no challenge was too great. Upon my first listen of the read-through rehearsals for this season’s productions of Twelfth Night, directed by Joseph Hanreddy, and The Heart of Robin Hood by David Farr, directed by Shanara Gabrielle, I had the exhilarating and reassuring feeling that this is the season we have been working toward.

These plays and this company truly demonstrate that Door Shakespeare has authentically and confidently grown into its own. The payoff for the massive amount of effort involved in rebuilding and reconfiguring this theater’s identity has fully come to fruition this season. We have been carefully and creatively moving the theater forward for years and have finally arrived at the 2017 season with an ease and gusto that feels right. By the grit and grace of so many artists, staff, volunteers, board and committee members, and the generous Door County community, Door Shakespeare has made its own, adventurous mark on the extraordinary arts scene that thrives on this peninsula.

More than 20 designers, directors and actors assembled this past June to produce these plays in just three-and-a-half short weeks. Their skill, talent, humanity and fearless drive to work in this magical space in the Garden at Björklunden impresses me on a daily basis. Everyone who ventures to experience Door Shakespeare knows that the outdoor space is intriguing, the staff is small but mighty, and our audiences are curious. Knowing this helps me to carefully craft each season’s play selections, programming and ensemble of artists and staff. Door Shakespeare’s artistic profile is now compared by critics to that of Utah Shakespeare Festival, American Players Theater, Illinois Shakespeare Festival, and other notable regional theaters that have all served as touchstones for me during my time at Door Shakespeare.

I hope you attend one of our productions this summer to see how much we have grown over the past few years. Come experience exceptional storytelling, creative staging, engaging live music, and a welcoming ensemble of artists and staff that have all contributed so much to the making of a new Door Shakespeare.

Heartfelt thanks to all that have been on this amazing journey and consider this an invitation to join our next adventure!