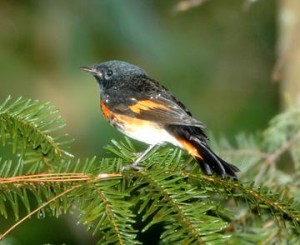 The American Redstart is one of at least 18 warbler species that nest on the peninsula.

Every year at this time birdwatchers new and old spend increasingly more time enjoying the excitement and challenges of observing warblers.

The weather affecting these birds along their migratory routes from their southern wintering grounds, the leaf-out of trees and shrubs in Door County, and the emergence of the insects upon which many of these small flighty birds feast all determine whether it will be a good or a poor warbler spring.

In recent early spring seasons, extremely cold weather held back the tree leaf-out and the availability of insects. Apparently the warblers which were headed for more northern latitudes and the boreal forest arrived here to find nothing upon which to feed and virtually “leap-frogged” over Door County, resulting in extremely disappointing warbler watching.

The swarms of untold millions of tiny black midges that appear on the scene as the foliage begins to develop become the primary food of the migrating flocks of warblers. Fortunately these midges don’t attack and bite humans! Under ideal conditions when the timing is right, there is plenty of food to be had and finally the warblers begin arriving in veritable “waves.”

It is a well-accepted fact that a lot of people, including some birders, don’t get overly excited about the warblers. In the first place these so-called “butterflies of the bird world” are so small and fast-moving that it can be downright difficult and frustrating to get a good look at them and, secondly, once you do get them focused in your binoculars or spotting scope their accurate identification doesn’t always come easily. 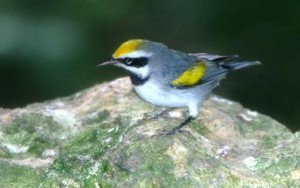 Warblers, like the Golden-winged Warbler and Magnolia Warbler pictured here, are returning to the peninsula.

Francis Lee Jaques (JAY-qweez), famous bird artist whose primary interest in birds centered on the large species such as ducks, geese and swans, once remarked, “The difference between warblers and no warblers is very slight.” And as a magician might say, “Now you see them, now you don’t!” It can be downright maddening how fast those little squirts can move out of one’s sight!

At least 54 species of these small, flighty, difficult-to-identify birds nest north of the Mexican border. Actually about one-half of the bird population of Canada’s vast evergreen (boreal) forest is warblers, and the bird of prey whose summer diet consists largely of warblers, upwards of 90 percent or more, is the Sharp-shinned Hawk.

Mother’s Day of May 13, 1961 went down in my field notes as an extraordinarily wonderful warbler day in my folks’ backyard in Kewaunee. The warbler wave was on, as bird students would say. Tiny tree leaves were just unfolding, the air was warm and tens of thousands of midges were hatching and providing food for the birds in the trees, shrubs and on the ground.

I can recall, as vividly as though it were yesterday, seeing my first male Black-throated Blue Warbler, not one but three or four. They fed on midges quite low in one of the large Norway Spruce trees in my parents’ back yard and allowed us to approach to within eight or ten feet of them. At the end of that memorable backyard birding day our list included 19 species of warblers in addition to about 40 other species of birds.

The first bird book I bought when I was in the U.S. Army was a 1947 edition of A Field Guide to The Birds by Roger Tory Peterson. Fortunately I chose to write dates and notes after many of the birds I saw through the years. What pleasant memories they bring back to me. I highly encourage people who are interested in birds and other phases of nature to liberally write in the margins of their field guides.

Many birders in the state dedicated thousands of hours observing birds and keeping careful records over a five-year period leading to the 2007 publication by the Wisconsin Society for Ornithology (WSO) of the Atlas of the Breeding Birds of Wisconsin. It is obtainable at http://www.wsobirds.org by clicking on the bookstore line.  My wife, Charlotte, coordinated the studies and field work by many other birders in Door County resulting in at least 18 species of warblers being confirmed as breeding in Door County. They are:  Nashville, Yellow, Chestnut-sided, Magnolia, Cape May, Black-throated Blue, Yellow-rumped, Blue-winged, Black-throated Green, Blackburnian, Pine, Black and White, Mourning, and Canada Warblers along with the American Redstart, Ovenbird, Northern Waterthrush and Common Yellowthroat. Even though the Northern Parula and Golden-winged Warblers were only listed as probable nesters, I’m convinced that, with more concerted effort, both will be found to be confirmed nesters here, bringing the nesting warbler species in Door County to 20.

Those of you birdwatchers interested in learning more about the challenging but alluring warblers will want to obtain a good, easy-to-use field guide. The latest edition of the National Geographic Field Guide to the Birds of North America, Peterson’s Field Guide to the Eastern Birds, Birds of North America (Kaufman Focus Guides) by Ken Kaufman, and also A Guide to Field Identification, Birds of North America, (Golden Field Guide) are very good. The latter, which we often use, is an older guide but has excellent features helping in warbler identification. The most complete guide to warblers is one of the Peterson Field Guides, Warblers, by Jon Dunn and Kimball Garrett. This book contains superb colored photographs, along with many colored plates by our own Wisconsin bird artist, Thomas Schultz, and is brimming with fascinating and helpful information about one of the most wonderful groups of birds in the world.