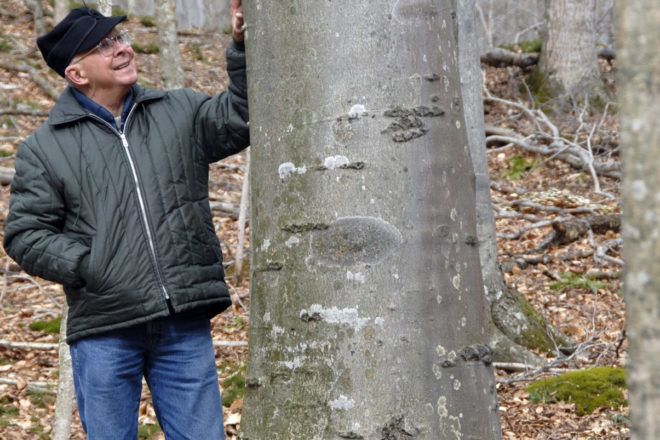 Can you think of a tree native to eastern Wisconsin (besides the paper birch) that is easier to identify, even from a distance, in winter as well as in summer, than the American beech? You can hardly incorrectly distinguish this wonderful tree with its big raw-boned, muscle-bound appearance and smooth ashy-gray, elephant leg-like trunks.

I remember many hikes on Rock Island with Roy and his saying the resident deer population was eating most of the young sugar maple trees before they could mature. He thought eventually the island environment would become dominated by a forest of American beech. The white-tailed deer do not eat young beech trees.

Well, that was before the appearance of the beech bark disease, which may kill as many as 95 percent of the American beeches. This species’ distribution in Wisconsin is limited pretty much to the counties bordering Lake Michigan and Green Bay, with a growing range up to 75 miles to the west. Having a shallow root system, the stately trees do best where surface moisture is sufficient. Offspring of the towering titans are extremely shade tolerant, with reproduction being mostly from root sprouts. Perhaps the main reason the young trees can withstand so much suppression from taller surrounding trees is because they are being nourished in part by the mother tree. 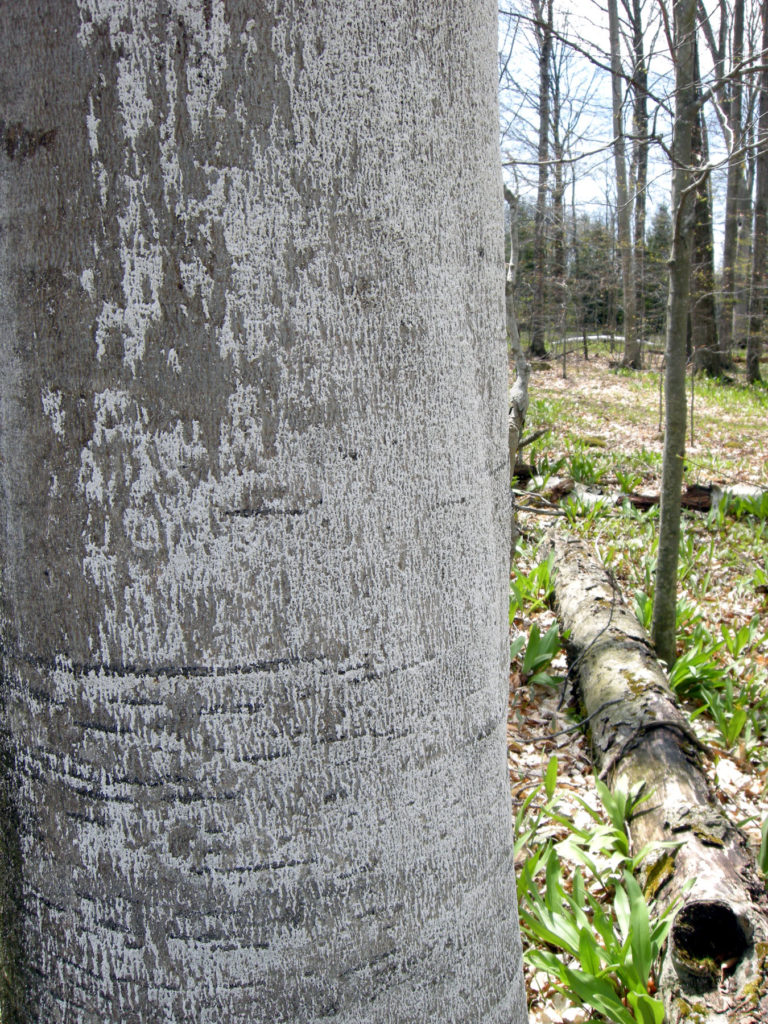 This beech trunk shows the white wooly secretions of the beech scale insect. The picture was taken in May 2017 at the Logan Creek Preserve. Photo by Charlotte Lukes.

Beeches are usually slow to drop their leaves in autumn, and like oaks, many of the young trees will hang on to their light tan, papery thin leaves throughout the winter. The neat term that applies to these long-lasting leaves is marcescent (mar-SESS-ent), meaning to wither without falling off.

It seems that these trees will produce a good crop of beech nuts only about every three to five years. High July temperatures in the preceding year and absence of late spring frosts in the bearing year help to ensure an abundant crop. The beech fruits have an unusual shape in that the moderately spiny husk splits into four sections revealing two, or occasionally three, neatly packed triangular nuts. The rather thin shiny hulls can be easily pried open with one’s fingernails, exposing the delicious edible meat.

Many birds and mammals depend on beech nuts for food, including ruffed grouse, rose-breasted grosbeaks, blue jays, white-breasted nuthatches, red-headed and red-bellied woodpeckers, black bear, porcupines, flying, gray and red squirrels, white-footed mice, chipmunks and deer. Very noticeable handicaps are suffered by those and other forms of wildlife during years when the beech nut crop is low or even entirely absent.

As many as two million bushels of beech nuts reportedly were gathered annually in France during the early 1800s. Very likely the nuts came from the European red beech, a close relative of the American beech. Cooking oil equal to about one-sixth of the amount of collected seeds was then pressed from the hulled nuts. History indicates that beech nut oil rivaled olive oil in excellence, and that it improved with age up to about six years. The oil could be stored for up to 10 years.

The genus name of our beech is Fagus (FAY-gus), very likely derived from the Greek phagus, meaning to eat. The record size American beech measured in Door County in August of 2012 was in the White Cliff Fen and was 89 feet tall, 8.25 feet in circumference and had a crown spread of nearly 76 feet. A national record dated back to 1996 was a beech in the state of Maryland with a circumference of 23.5 feet, height of 115 feet and a crown spread of 138 feet. These trees can reach enormous size.

Roy and I vacationed in the eastern half of Michigan’s Upper Peninsula for many years and enjoyed the Seney National Wildlife Refuge and the Pictured Rocks National Lakeshore. In 2010 we hiked the trails to the Grand Sable Dunes, on the south shore of Lake Superior, and noticed many huge beech trees had been cut down. The beech bark disease infected numerous American beech trees and they had to be removed for the safety of all the people visiting and hiking along the trails.

The beech scale insect, Cryptococcus fagisuga, was accidentally brought into Nova Scotia in 1890 on ornamental beech trees imported from Europe. The Canadian Maritime provinces had infected beech trees throughout the area by the early 1930s. It was also found at that time in parts of Maine. Much of New England and parts of New York had the infection by 1960. It was found in northeast Pennsylvania by 1975 and has spread to other parts of the state as well as West Virginia. 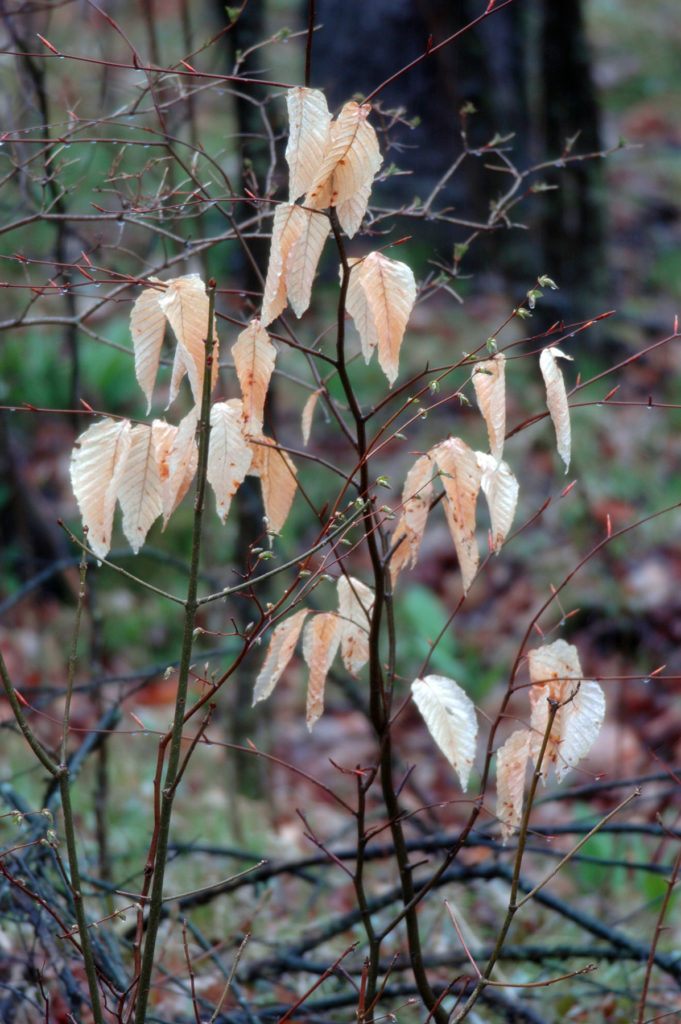 Younger beech trees have marcescent leaves that cling to the trees throughout the winter. Photo by Roy Lukes.

Localized infections of beech bark disease now exist in Virginia, North Carolina, Tennessee, Ohio, Quebec, Ontario and Michigan. It first appeared in Door County about five or six years ago in the area along Glidden Drive near Lake Michigan and has since spread to other sections of the county.

The insect invades tree bark and after excessive feeding allows two different fungi to produce annual cankers on the bark. Diseased trees will have white cottony patches on their bark. This wooly white coating is due to the secretions of the insect. The regular formations of the cankers can girdle and kill the tree and cause the top to die and break apart. This is referred to as beech snap as huge parts of the crown can topple during high winds.

Needless to say this can cause extreme danger to people walking on trails near these trees. Whitefish Dunes State Park had many of their beech trees removed for this reason several years ago.

The beech scale insect is so small, one millimeter in length, and sucks sap with a mouthpart called a stylet that is two millimeters in length. As it feeds it secretes a waxy substance from glands to produce the white wooly coating on its body. It will overwinter on the tree and go through a molt to become a mature female the next spring. There are no male insects. The female will lay eggs through the feature of parthenogenesis, (par-then-o-GEN-i-sis), a word from the Greek for virgin and creation. It is a natural form of asexual reproduction.

The disease affects beech trees that are at least 30 years old. Some trees have shown a resistance to the fungus and insect, but most will succumb. The U. S. range of the American beech is mainly east of the Mississippi River. Illinois has few of them and in Wisconsin the trees are only found in the eastern counties.

Global climate change may play a part in the success of the disease as the insect cannot tolerate severely cold temperatures. It has taken 100 years for the disease to spread from the northeastern part of the continent but as the climate warms, it spreads faster.

Research is being done to find a biologic antidote to this insect but no relief is in sight. I fear the welfare of so many animals and birds that depend on these magnificent trees. Enjoy these towering broadleaved hardwoods as long as possible. Let’s hope a few will survive.