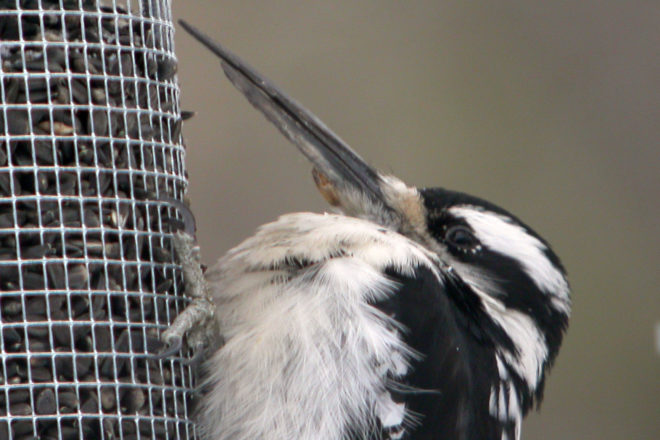 A hairy woodpecker with a deformed beak visited the Lukeses’ feeding station. Photo by Roy Lukes.

How would you survive if you had to pick up everything you wanted to eat by grabbing it with your mouth? For most birds, that’s their way of getting nourishment, so their beak is a vital part of their existence.

The size and shape of a beak varies dramatically with each species, depending on what the bird eats. The small songbirds at our feeders are mostly seedeaters in the winter. Nesting species such as black-capped chickadees and cardinals eat mostly insects during the breeding season. Newborn chicks require a high-protein diet of insects or larvae in order to grow and fly out of the nest.

I remember my late husband, Roy, telling me of his first learning experience with a veteran bird bander in southern Wisconsin. Roy’s good friend allowed him to remove his first chickadee from the delicate mist net in which the bird was caught. Once Roy began to untangle the bird’s feet from the threads, the chickadee rapidly hammered at his hand with its beak in an attempt to gain freedom – a reminder that a beak is also a tool of offense.

The extreme opposite of a chickadee’s beak is that of the great blue heron. This large water bird stands very still in shallow ponds or shorelines, waiting for fish to swim by, and then it stabs and captures the prey with its long, pointed bill.

Hawks and owls have strong feet to catch and hold their food, which is usually a small animal, reptile or another bird. They have sharp, hooked beaks that help them tear apart their food, enabling them to swallow smaller pieces.

The long, slender beaks of ruby-throated hummingbirds help them to snatch insects from deep inside tubular flowers and draw in the nectar. Many people have hummingbird feeders and enjoy seeing these fast fliers suck in the sweet water. If you have ever seen how birds use their beaks to groom their feathers, you would wonder how the hummers don’t stab themselves in the process!

Roy was a federally licensed bird bander for about 25 years. I remember how he would take a songbird out of the mist net set up in the backyard of The Ridges’ Upper Range Light, take it to the front steps and show the elementary school students particular features about the bird.

All birds have an oil gland at the base of their tail that they can pinch to release some oil, then spread it on their feathers with their beak. This is how they can withstand rainstorms and keep their plumage in good shape.

Some of the birds I watched Roy band were grosbeaks. These heavy-billed birds have beaks that act like scissors. The upper mandible slightly overlaps the edges of the lower mandible, allowing them to quickly crack open the shells of sunflower seeds and extract the food inside. More than once, a grosbeak caught one of Roy’s fingers and sliced open the skin.

A number of years ago, Roy photographed an unusual hairy woodpecker that visited our feeding station. Its beak appeared to be twice as long as normal, and the upper mandible was about a half inch longer than the lower one. It had a very difficult time gathering any food and probably did not live very long.

A few months ago, I saw a crow walking around under the feeders and noticed that its beak was deformed, with a large knob on one side and separated at the tip. It was around for about a week and tended to walk rather than fly. It apparently could not ingest enough nourishment to gain the strength to fly and may have perished by now.

One wonders how these beak deformities occur. A friend who studied birds all his life, Tom Erdman, found that colony-nesting double-crested cormorant chicks had deformed beaks. It was thought that the extreme PCB pollution of the lower end of the Green Bay waters was the cause of the developmental asymmetry. Some of the beaks were curved over each other, and some had upper and lower beaks of different sizes.

Other studies have found beak deformities in chickadees called avian keratin disorder. The causes of some of these conditions are difficult to determine, but numerous factors such as contaminated food and water, nutritional deficiencies, disease, parasites, blunt trauma and genetic abnormalities may play a part.

The waters of Green Bay and the Fox River were dredged and supposedly cleaned of the contamination during the past 20 years, and the EPA has said the project has finally been completed. We humans have caused a lot of environmental damage affecting birds. Let’s do all we can to keep this from happening in the future to ensure a better life for our avian friends – and ourselves!