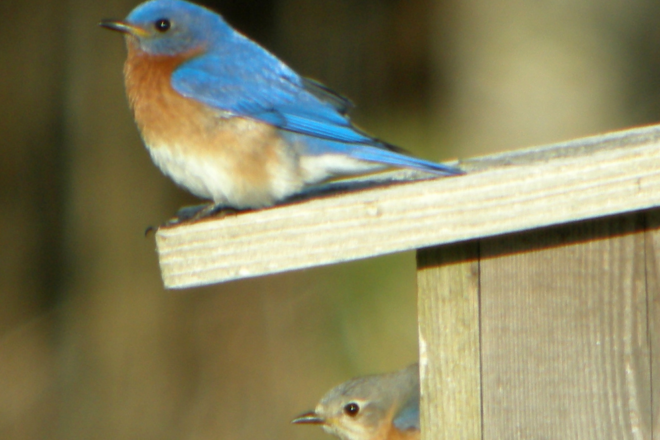 The male bluebird on top of the box gives moral support to the female (below, peeking out of the box), who does all the nest building. Photo by Roy Lukes.

Our winter weather this past year was more dry and a bit milder than normal, but that was not the case in the South during February. Most of the states from Texas and Oklahoma to the Carolinas and up to Kentucky were hit with a long period of freezing weather that caused power outages and major ice storms.

A member of Wisconsin’s birding community wrote in a recent email about a friend’s observances down south. The friend had read posts on the Wisconsin Birders’ Network about the lack of birds up here this spring.

Here are his experiences with February’s weather in Oklahoma:

“It all started down here with freezing drizzle on Feb. 8 – enough to coat everything. That is when the temperature went below freezing. The wind was out of the northeast and stayed that way for almost two weeks. It was below freezing here for 325 straight hours (13.5 days). On the 14th and 15th, we got four inches of snow. This was followed by another four inches on the 16th and 17th. On the morning of the 16th, it was 17 degrees below zero! At 7 am, our power went out for two hours, then came on again and stayed on. It finally went above freezing on the afternoon of the 19th. On the 23rd, the high was 71.

“The aftermath was bad. The cold had extended all the way to south Texas. There were no phoebes, sedge wrens, myrtle warblers or bluebirds to be found around here and very few sparrows. I walked into a wildlife area near here, almost a mile, and found two sparrows, both American tree sparrows. And those brutal conditions certainly covered a huge area throughout many Southern states, so we should not be surprised that the numbers of many species that spend the winter in those areas are down substantially.”

I heard about freezing rain in many areas and contacted a friend who lives in Kentucky. She was safe but noticed many shrubs that produce fruit and berries – which birds consume during the winter – were covered with ice. She found several dead songbirds that feed on these fruits. Birds cannot eat ice-covered berries.

Starting in 2007, my late husband, Roy, and I volunteered to coordinate Door County’s bluebird nest box monitors and checked the boxes on our trails weekly from early April to the beginning of September, when the breeding season ends.

These nest boxes are used by eastern bluebirds, tree swallows, house wrens and black-capped chickadees. It is important to maintain records over the years to see how the bird populations are faring.

My notes from last year show that at the beginning of May, I had 14 boxes with complete bluebird nests, and there were 52 eggs. At the same time this year, I had two bluebird nests with 10 eggs. Most of the other local monitors are finding the same problems: very few bluebirds. I contacted the coordinator of all the nest box monitors who volunteer for the Bluebird Restoration Association of Wisconsin, and the conditions are the same throughout the state.

Reports have come in that many bluebirds died during the extended cold weather in February – they either froze to death or starved. This will probably set the bluebird population back for many years, depending on how future winters affect them.

Some people think climate change is a fallacy. They look at their local weather and say, “There’s no global warming here!” But it is not a local situation – it is worldwide. There is a tremendous difference between weather and climate.

Ice at the Earth’s poles is melting at a more rapid pace every year, adding to the amount of water in our oceans. Sea-level increase is gradually affecting many shorelines worldwide. As climate heats up through fossil fuels being burned, the air can hold more moisture. That makes for more intense storms and worse flooding. Just look at what the southern U.S. has endured in massive rain events during the past several years.

To quote my friend Bill Volkert, “The unusually cold weather and winter storms in Texas, and last summer’s fires out west, underscore the problems of climate change. We have already converted so much natural habitat for our own uses that birds have become confined to smaller spaces and in smaller numbers. These weather events are becoming more severe and more frequent and are having an even greater impact on our birds than before. When populations decline, the loss of a hundred thousand birds is far greater in a population of a million than one of 10 million. I think that the world is trying to tell us something, and I hope we listen.”

The “canary in the coal mine” is really all the birds that we are putting at risk with our consumption of the Earth.