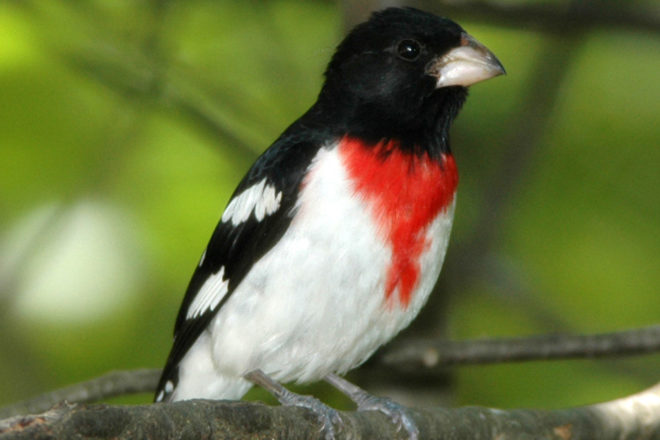 This ASY male rose-breasted grosbeak is considered a full adult. He has all-black wing, tail and head feathers and is at least three years old. Photo by Roy Lukes.

I truly enjoy bird songs during the breeding season, and among the bird varieties that have sung in my woods for the past 42 years, one of my favorites is the rose-breasted grosbeak. They nest in this primarily upland hardwood area every year and are regulars at the feeders.

Now the first youngsters are out of the nest and land on the feeders near one of their parents. These new fledglings rapidly vibrate their wings in an attempt to have the adults feed them. They appear helpless in their attempts to crack open the sunflower seeds but will eventually learn how to do it.

There is a lot for birdwatchers to like about rose-breasted grosbeaks. They are relatively large and colorful, with the adult males and females having distinctively different plumages. Most are tolerant of my presence, often within 20 feet from where they feed.

Males’ songs are far-reaching, rich, bubbly, smoothly liquid and almost joyful. The young, freshly out of the nest, have a distinctive “HEE-er, HEE-er” call that lets their parents know where they are in the nearby trees and that they’re hungry.

The eye-catching, rosy bibs or “neckties” of the adult males are different enough to easily tell one male from another during their frequent, daily feeder and bird-bath visits. This summer I estimate that at least three pairs are nesting in the large woods near my home.

The male rose-breasted grosbeaks can be aged to a certain degree by their plumage. Those with black wings and tails are “ASY”: “after second year,” in the language that my late husband, Roy, used in his bird banding. That means these birds could be in their third year or older.

The “SY” (“second year”) males, meaning those hatched in 2018, have brown wings and tails, which will be molted in late summer and grow back as black feathers. In the summer, these SY males clearly stand out from the ASY males.

You may notice on some of the SY males a certain amount of brown and white mixed with their black plumage, and their white breasts also have hints of brown. It appears that the SY males at this stage are capable of mating successfully. In early spring, when they have just arrived from the South, many sit on the feeder, and those SY males don’t give an inch to the older males.

There’s another interesting plumage characteristic of the fledgling rose-breasted grosbeaks. Ordinarily those that have just left the nest look alike, so it’s difficult to tell the sexes apart. However, even though both males and females look like the adult female, a look at the youngster’s underwing reveals the answer. Baby females have yellow underwing feathers, and males have pink feathers – the same as adults’ underwing colors.

It’s somewhat difficult to age female adults, but the few exceptions come immediately after they’ve left the nest. They are innocently immaculate in appearance, with feather edges that are clean and very sharply defined – as opposed to the more ragged feather edges of the adult birds – and their food-begging tactics are giveaways.

Also examine the base of the beak: you’ll notice that the fold of skin there, between the upper and lower mandibles, is quite pink: a feature found on most hatchlings immediately after leaving the nest.

By late summer, the postnuptial molt of the adults begins and is especially noticeable on the SY males, when they look downright ragged: ungroomed ragamuffins! Their breast feathers, although still containing plenty of rose coloring, begin to show tan edges, and their brown wing and tail feathers show plenty of wear.

The adult males that still have their regal black, white and rose “suits” now show traces of tan on their backs and are slowly losing their trim and sharp breeding plumage. The brown and tan colors will be with them until early spring of the next year, when they will molt into their brilliant breeding plumage again.Every year the songs of these marvelous singers grace our summer, and we feel highly privileged to live in their woods!