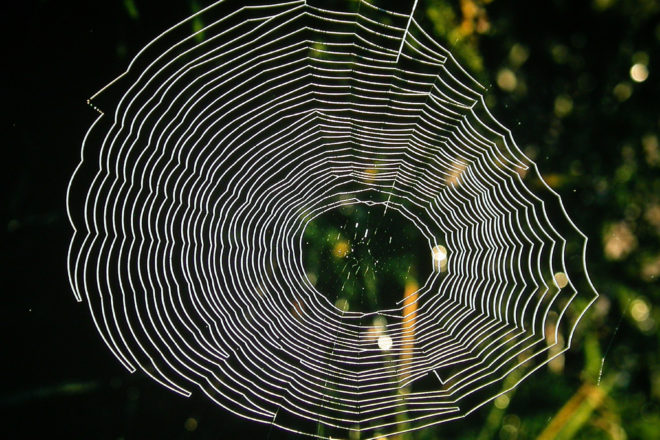 Early-morning dew coats a spider web with droplets that look like diamonds in the sunlight. Photo by Roy Lukes.

September is a great month to search for, photograph, learn more about and increase your admiration for spiders in the great outdoors. On a recent early-morning walk, I saw a lot of dew-covered spider webs suspended between tall grasses along the side of the road. They looked like a fairyland. Arise at dawn and venture into your garden, to the edge of the yard, to a shrubby shoreline or along a country road to see the dew-studded webs of the orb-weaving spiders decorating the landscape like sparkling diamonds in the stillness of the early-morning light.

Take a close look at some garden flowers or colorful weed blossoms on a sunny day this month, and chances are, you’ll see dozens of another favorite creature: the crab spider (also known as the ambush spider). They will be yellow on yellow flowers and can be pink and white on other blossoms. These lovely little creatures do not spin webs but wait for an insect to land and then quickly grab it.

People who spend time in flower or vegetable gardens have often come upon one of the largest and most beautiful of our native spiders, the garden spider. Two species commonly seen in Door County are the garden and banded garden spiders, both in the genus Argiope (ar-JY-o-pee).

Another delicate flower spider that we have seen on our front-yard plants is the long-jawed orb weaver, one of 17 species in the U.S. Because many spiders are included in a multitude of wild food chains and are eaten by many other predatory animals and insects, they are highly adept at hiding. One that we have seen can stretch out to its full two-inch length and appear very narrow near the center of its small web, waiting for the next meal to arrive.

An outstanding spider field guide, Spiders of the North Woods by Larry Weber (Kollrath-Stensaas Publishing), may be available at some nature centers or local bookstores. He also is the author of Butterflies of the North Woods. Mark “Sparky” Stensaas, one of the publishers, wrote one of the favorite books of Roy, my late husband. It’s called Canoe Country Flora and is perfectly suited to much of Door County’s nature.

Even though a field of crops is harvested and cleared at this time of year, followed by a new planting next spring, thousands of baby spiders can be “ballooned” to that area during the summer. The extremely fine gossamer silk (“drag line”) given off by each spiderling of the web weavers – as well as many that are not web weavers – while they walk enables them to be swept up by the wind and carried for long distances.

While some baby spiders parachute over the landscape, others travel on foot. Wolf spiders, for example, make no webs, but they do leave a drag line behind as they amble over the ground. While working in their gardens or flower beds, many people see them on the soil.

Wolf spiders must run down their prey the way a fox captures a mouse. They are keen-sighted and swift of foot compared to web-weaving spiders, which are comparatively poor-sighted and too slow to capture their prey in any way other than by snaring them in their webs.

I remember seeing a large female wolf spider, her back covered with dozens of tiny baby spiders, which Roy photographed in our front yard. Occasionally one of her babies ventured a few inches away, then quickly scurried up one of her legs to rejoin the rest of the group on her back. She gently brushed away any babies that crawled over any of her eight eyes, which were arranged in three rows, the lower having four eyes. Two of the eyes were larger than the remaining six, and those were capable of reflecting artificial light at night. Two of the eight eyes were higher on her head and not as easily visible. Naturalist Donald Culross Peattie wrote while viewing an adult and child watch a spider spinning its web, “If he [a child] learns admiration instead of disgust for the tiny spinner, he will have learned one of the greatest lessons in nature – that all life is sacred.”