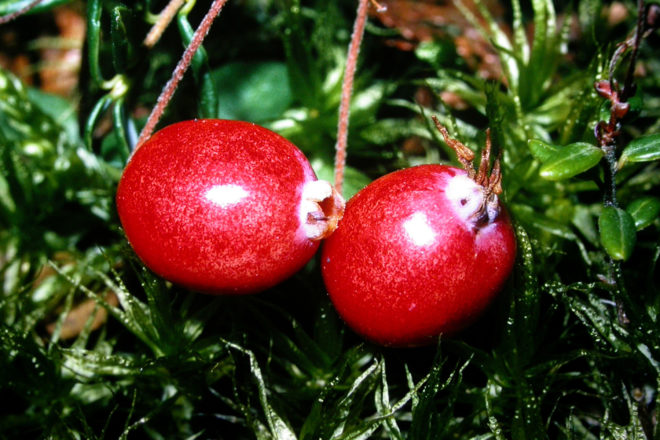 Wild cranberry fruits are very small and here you can see how tiny the leaves are just to the right of the fruit. Photos by Roy Lukes.

There are a number of traditional foods associated with the Thanksgiving holiday. Roast turkey with stuffing, pumpkin pie and cranberry sauce are the most common.

Cranberries have a long history in this country. Native Americans introduced them to the early settlers of New England. In fact a Pilgrim cookbook dating back to 1663 had, perhaps, the first recipe for cranberry sauce.

Native Americans called the fruit “sour berry” and the Pilgrims nicknamed it “ruby of the bog.” The native variety grows in cold wetlands and bogs and has the scientific name, Vaccinium oxycoccos, (vac-SY-nee-um ox-i-COCK-us). Vaccinus, in Latin, means “of cows.” And the first vaccine produced was for cow pox. The word oxycoccos refers to sour berry. Tart, indeed, is a good description of their taste; but add a little sweetening (Native Americans used maple sugar) and they become piquant and pleasantly tart with a lively charm!

Native Americans not only ate the berries, they learned that the steeped leaves produced a tea to aid a person who was slightly ill with nausea. The leaves, bitter and astringent, were also used in treating diarrhea and diabetes and for purifying the blood. Hundreds of years of trial and error led them to using various plants for medicines, which, when tested by modern day pharmaceutics, proved to be about 65 percent accurate! 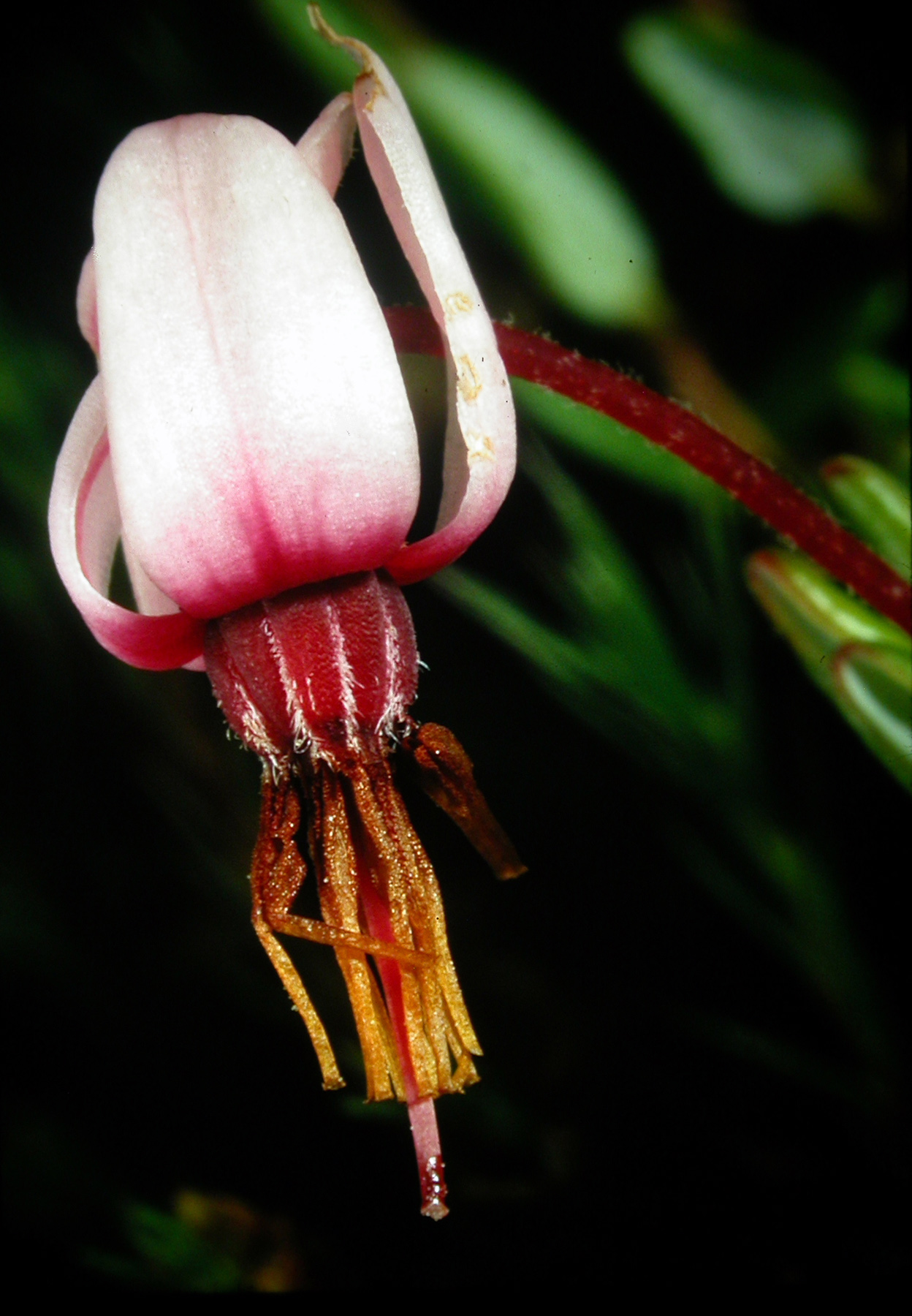 A single wild cranberry flower is a delicate pink and white.

Cranberries hide in quaking bogs and peat swamps – out-of-the-way habitats seldom visited by the average person; therefore it is highly unlikely that anyone would ever serve you wild cranberry sauce. The Pilgrims were presented with goodwill offerings of cranberries by the Native Americans. It is also thought to have been the first native fruit to be eaten in Europe.

Fruits of the small wild cranberry are about currant-sized, from ¼- to ½-inch in diameter, often spotted with brown. The ¼-inch-long leaves are pointed, dark green above and whitish below, and are evergreen. These creeping prostrate shrubs surely have to be among the smallest, if not the smallest, woody evergreen plants in the United States. The low-growing vines can be up to seven inches long and as tall as eight inches.

The small cranberry belongs to the Heath family of plants with its more than 1,400 mainly evergreen shrubs. Yes, despite its diminutive size, we can call it a shrub. The flowers, having four pink sharply recurved petals resembling miniature shooting star flowers, grow at the very tips of the creeping horizontal stems. They are pollinated by bees.

It is generally the large or American cranberry, Vaccinium macrocarpon, meaning large-fruited, which is commercially grown in the United States. Several varieties such as McFarlin, Searis, Beckwirh, Stevens and Wilcox are planted. Fruits of the American are more than twice the size of the small wild cranberry. Their colors range from pink to dark red, mottled with red and white.

My late husband Roy taught school in Wisconsin Rapids in 1959. He remembered that it was an unproductive year for cranberry growers there and in the Northeast. The U.S. Department of Health, Education and Welfare publicized information linking a weed killer, aminotriazole, with cancer. This chemical was occasionally used on the cranberry farms in central and northern Wisconsin then and suddenly the growers could not even give their fruit away. There were a lot of cranberry-less turkey dinners that year.

Another close relative of the small and the American cranberry is the cowberry or mountain cranberry. It is also called the lingonberry, Vaccinium vitis-idaea. Originally this fruit was called the grape of Mt. Ida. It can be found in extreme northern Minnesota, the mountains of the Northeast and especially on the Gaspé Peninsula and the north shore of the Gulf of St. Lawrence.

Most of our lingonberries are imported today from Newfoundland, where they are called partridgeberries, and from Norway where they are known as “lingon baer.” These fruits overwinter quite well and may be best in early spring. At least they shouldn’t be picked until the frost has mellowed them. It’s a great treat to go to Al Johnson’s Swedish Restaurant in Sister Bay for Swedish pancakes with lingonberry sauce.

I had never seen the commercial cranberry growing area of our state. We are the biggest U.S. producer of the crop. In 1995 Wisconsin earned that status, which until then had been held by Massachusetts. Other huge producers in Europe are Latvia, Romania and the Ukraine.

We were invited to visit and stay with my father’s cousin in Wisconsin Rapids in late October 1999. My dad’s relative was an attorney for the cranberry growers and took us on a tour of some of the land where the fruit was being harvested west of the city. He even drove us to Babcock and we went behind the large Ocean Spray plant to watch open-topped semi-trailer-sized trucks back up to the loading, or I should say unloading, dock. There, the long box of the truck lifted up like a dump truck and all the cranberries slid into the channel and right into the processing plant.

A native shrub that grows in Door County, which is called the highbush cranberry, is not related at all to the other fruit. In fact it is in the Viburnum genus, a member of the Honeysuckle family, but does have red fruits similar in size and flavor to the cranberry. I remember my neighbor in Baileys Harbor making jelly from the fruit. The smell of crushing the highbush cranberries was a bit unpleasant. We compared it to the odor of dirty socks, but the flavor of the jelly was wonderful.

Highbush cranberry is native to the Great Lakes region and New England. It is more like a shrubby tree and can grow to a height of 8 to 15 feet. This native has the Latin name, Viburnum opulus var. americanum. There is a European form, Viburnum opulus, which grows in the same region but the fruits are not edible. They are very bitter.

This year’s crop of commercial cranberries is so great that growers are dumping about 25 percent to keep the price up. Whatever you like, the fresh berries in a bag or the canned cranberry sauce, make cranberries a part of your Thanksgiving dinner and enjoy a product from Wisconsin.