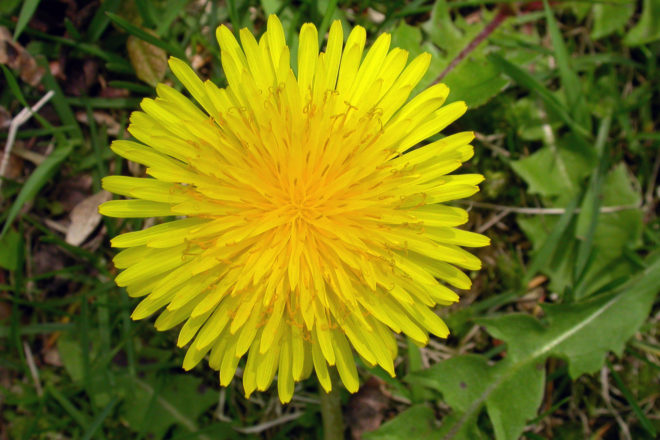 The dandelion has a composite flower head composed of ray petals on the perimeter and many tiny florets in the center. Photos by Roy Lukes.

The blow ball, lion’s tooth, peasant’s cloak, Priest’s crown, Irish daisy and monk’s head have all been nicknames through the years of one of the more successful plants to inhabit most land masses in the northern hemisphere during the past century. Today it is the scourge of especially those who labor so hard to maintain their green sterile expanses of lawns. What else could this plant possibly be but the far-flung dandelion?

We never planted a real lawn around our new house but rather allowed any and all wild plants to flourish there. Yes, I do mow it occasionally so that it doesn’t overwhelm and discourage the wildlife and birds that use the yard. Needless to say, perhaps 25 percent or more of the lawn’s greenery consists of dandelions.

Many of the “dandy lions” go to seed each year thus ensuring a continued crop of them in fall and the next spring. Their foliage is green and surely will withstand practically all adversities nature can produce.

I picked a mature seed head, a blow ball in olden times, and counted the seeds. Using a pair of tweezers I carefully removed one or two parachuted seeds at a time – a total of 232! The surface, and especially the tip end, contains many small upward pointed barbs, apparently designed to help the seed twist or drill itself into the ground.

Visualize a dandelion covered lawn 50 feet by 50 feet and you could expect the seed production to reach nearly 13 million. Considering the thousands of “gardens” of these yellow dandies in a county, plus their manner of floating seeds away with the greatest of ease, there should be little wonder why this flower has become America’s best known weed. 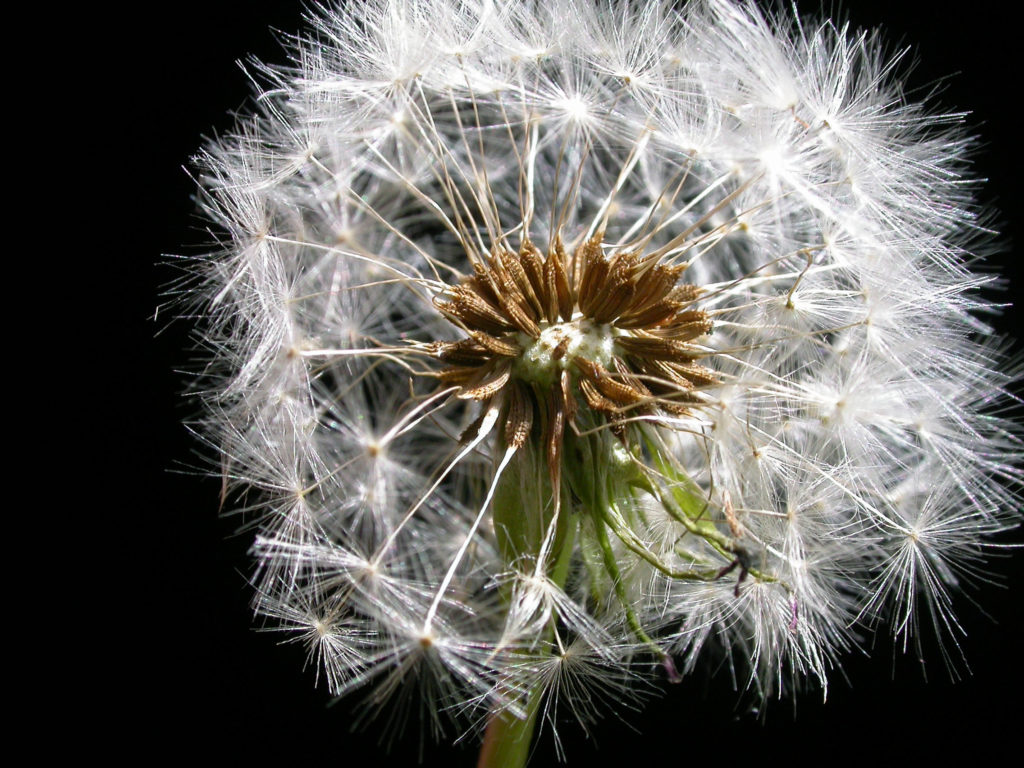 A close look at the seed head shows the brownish seeds connected to thin stalks with fine hairs that help them parachute off in the slightest wind.

Examine the jagged toothed edge of a dandelion leaf and you will easily understand the derivation of the word. It’s from the French “dents de lion” meaning lion’s teeth.

Even though the dandelion as most of us know it was introduced and naturalized from Europe, there are at least nine different species native to particularly the northern parts of the North American continent. Another European species, the red-seeded dandelion, grows here but not as abundantly as the common dandelion, which has brownish seeds.

There is another smaller dandelion-like plant, the fall dandelion, which is also native to the Old World and really is quite uncommon in this area. It is in the genus Leontodon and another name for it is hawkbit. A large stand of it has been known to grow on the lawn of the Baileys Harbor Cemetery blossoming later in summer.

Talk about a strategist of the first magnitude! What an unusually successful plant this perennial herb is. You can mow them down week after week to no avail. They’ll still survive and unless you dig out every bit of the deep, food-storing root they will continue to develop and propagate.

Their low-growing rosettes of leaves cover a considerable area, shading the ground and helping to ensure more moisture for the long hardy taproot. New rosettes are produced on top of the old ones in later summer and will overwinter in this condition, ready to help the plant produce flowers at the first sign of spring. Let’s face it; those very first yellow composite blossoms are kind of nice to see. And a friend who has some beehives knows those bees will seek that first pollen of spring.

We have several cottontails that live in our woods and frequent the front yard. On occasion we would see one nip off the dandelion flower stem at ground level and chomp it down its throat like a strand of spaghetti. They also enjoy eating the dandelion leaves. A few times we also noticed indigo buntings eating the seeds off the plants below the feeders.

Euell Gibbons, in his great book, Stalking the Wild Asparagus, interpreted the scientific name of the dandelion, Taraxacum officinale, as meaning “official remedy for disorders.” Also read other books on using wild plants for food and various purposes and you will be surprised at the nutritious and medicinal value of this well-known and frequently despised plant.

There are those who claim that dandelion wine, made in part from the fresh flowers, can be very excellent depending upon the maker. And several of our friends swear by the outstanding tonic obtained from a salad made with the first new dandelion leaves of the spring season.

If you’re going to want to get away from these brilliant yellow flowers you’ll have to move to either extreme southwestern Arizona or southeastern California, dry desert land, about the only area in our country that, to date, has not been bitten by these “lion’s teeth.” We might just as well get used to them because they’re here to stay!