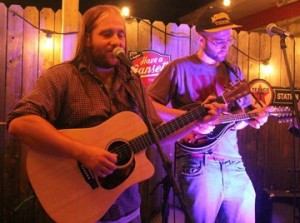 Door County favorites Double Dubbs announce that their debut album, Float On, will be released on May 16.

“It’s been a labor of love,” says founding member Alex White of the new album. “We’ve worked on recording and mixing this album throughout most of the past winter and we’re really excited about the product that we’ve captured!”

Double Dubbs is an acoustic-electric band with songwriting influenced by roots rock, blues, and American folk music. Formed in Madison, Wisconsin, by brothers Alex and Keith White, the band also includes guitarist Nick Smith and percussionist Dan Smrz, and can swell to as many as five members, utilizing acoustic and electric guitars, bass, and mandolin.

Double Dubbs draw influence from the likes of John Prine, Little Feat, The Band, and the vast community of talented artists in the Midwest music scene.

Double Dubbs will hit the road this summer in support of the album by performing several headlining shows and festivals in the Midwest.