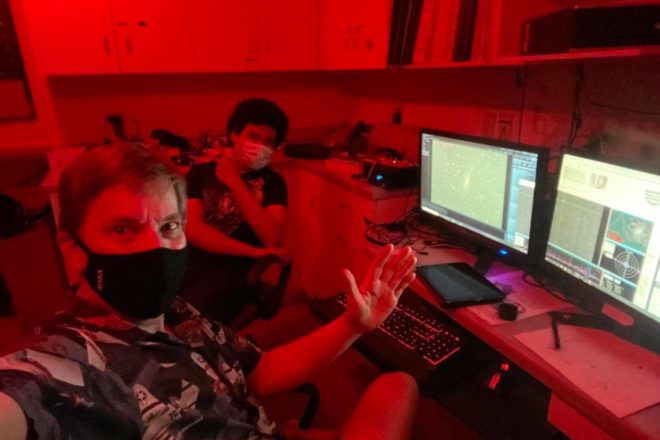 (From left) Tom Gwilym, Door Peninsula Astronomical Society (DPAS) vice president; and DPAS summer intern Shea DeFour-Remy work their techie magic at the DPAS Observatory. When clear skies enable them to open the observatory dome and operate the telescope, they stream their images on the Night Skies Network website at nightskiesnetwork.com. Submitted.

University of Arizona sophomore Shea DeFour-Remy grew up on the island of Trinidad, but throughout his childhood, he visited his grandparents in Door County. And when he was here, he attended the programs of the Door Peninsula Astronomical Society (DPAS).

Because DPAS members are dedicated to encouraging youth who show an interest in physics and astronomy, they welcomed DeFour-Remy and other young people to their meetings and events.

Many of DPAS’s founding members were educators. Among them, Dr. Ray Stonecipher was particularly committed to helping young people. Upon his death, he left two substantial bequests to further astronomical education.

Last year, using the interest from the Stonecipher Fund, DPAS was able to purchase a 16-inch Ritchey-Chrétien telescope for the Leif Everson Observatory and a Digitalis inflatable planetarium. DPAS then launched an educational blitz to introduce its new purchases to the community.

This outreach effort included nine planetarium shows and telescope demonstrations up and down the peninsula that eventually reached 411 learners, two-thirds of whom were youth. Almost 600 additional visitors enjoyed planetarium shows at the Astronomy Campus on Utah Street in Sturgeon Bay and other locations.

But prior to the planetarium tour, DPAS offered a preview show following one of its monthly meetings. The planetarium was inflated, almost filling the Stonecipher Astronomy Center, and members entered the dome eager to view the wonders of the universe.

As is often the case with new equipment, the touch pad was not communicating with the digital projector, which caused some frustration. But DeFour-Remy was there; he politely offered to help; and he somehow made the equipment work.

His helpful gesture planted a seed in the minds of the DPAS board members to offer DeFour-Remy an internship during the summer of 2020 so that he could present planetarium shows to the public on a regular basis. He could also get experience in astrophotography by working in the observatory with DPAS Vice President Tom Gwilym.

DeFour-Remy accepted the intern position, but COVID-19 squelched the plan of offering summer planetarium shows. Instead, he spent the summer sorting, repairing and inventorying the society’s equipment and using his computer skills to move DPAS into virtual programming and video photography.

He and Gwilym spent many long, late nights calibrating the telescope and improving the astro-imaging capabilities of the observatory. They’re currently perfecting ways to direct and focus the telescope and to create images remotely.

“Working with Tom has shown me the practical side of what I have been learning in schools,” said DeFour-Remy, who’s studying astrophysics. He’s opted to stay in Door County this winter, completing some coursework virtually, but also extending his astronomical internship during the winter.

And though DeFour-Remy was the first DPAS intern, he won’t be the last student whom DPAS has helped to launch. Thanks to the Stonecipher bequest, the society is now providing 16 generous scholarships – administered through the Door County Community Foundation’s Door County Scholarship Network – to local students who are majoring in STEM disciplines.