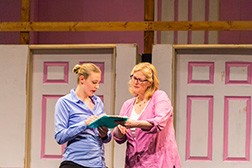 Anyone who knows Lizz Thomas, Gibraltar’s effervescent kindergarten teacher and director of 28 superb musicals, will find it hard to believe that she was once so painfully shy that she was unable to go to a Dairy Queen and order an ice cream cone. Or that she is the same person who was so panic-stricken that she fainted dead away at the prospect of giving a speech in front of a middle school class where she was – once again – the new kid in school.

It was the aftermath of that event that changed Lizz’s life. Her English teacher suggested she audition for a play.

“I refused at first,” she says. “I told him there was no way I could be in a play if I couldn’t even give a little talk in front of my class. But finally I agreed, and I was cast in the lead. I don’t remember the name of the play, but it was quite progressive for the time – about how a shy girl learned to deal with being the outsider at school.” (Sounds like a Broadway show: Shy girl goes on in the role of a shy girl and finds that she’s overcome her shyness.)

How many people do you know who have a profession they love and excel in, but also have a secret “dream job” they’d pursue if life were perfect? Lizz is the rare person who has both. She earned an undergraduate degree in human development, specializing in early childhood education, from the University of Wisconsin – Milwaukee and UW – Green Bay, and later a master’s in curriculum instruction from Lesley University’s satellite program, with an emphasis in integrating the arts, which is her passion. She taught briefly in Green Bay before coming to Gibraltar 30 years ago.

“I’ve always had early childhood classes,” she says. “There is so much growth that happens and it’s so exciting to watch. I try to make sure that each student feels they have accomplished something everyday.”

Lizz is working toward national board certification as a master teacher, which she hopes will help her spread the message of the importance of integrating the arts into the curriculum and how much better children learn if lessons are coordinated with rhythm and movement, rather than depending on rote learning or worksheets. Every day in her classroom ends with a song as the youngsters wait at the door to leave.

Gary Jones was directing musicals when Lizz came to Gibraltar, and after a year or so she told him she was interested in theater and wondered if he could use an assistant. He could, and they worked together for a few years until he was ready to leave the entire job to Lizz.

“Since the time I did that play in middle school, it has been my mission to do theater with kids,” she says. “I have seen miraculous changes in so many of them, and it’s so fulfilling and rewarding to watch. There are so many stories I can look back on and think, ‘Wow! That was so great for them!’”

The first show she directed on her own was Into the Woods. It was complicated, but a great success. One she’s especially proud of is Seussical, the Musical, from 2009. It was chosen for the Wisconsin Theatre Festival Showcase, performed for an audience of directors and theater kids from around the state. There were standing ovations long before the show ended.

“That was so exciting,” Lizz says, “to show what a little school could do. We didn’t have the cast for the show we wanted to do that year, so we took a group of 20 fledgling kids and they just created magic. You teach as much as you can over a few weeks, so they feel comfortable in their roles, and until the last minute, you don’t see it happening. Then suddenly, it’s ‘Oh, they did listen. They did get it!’”

Lizz believes that musical theater is lifeblood for people and that everyone can be a part of it. Larger schools may demand that students involved with theater devote all their extra-curricular time to it, but that’s not practical in a school with an enrollment as small as Gibraltar’s.

“I want kids to know that it’s fine to take part in other activities,” Lizz says. “It gets hectic trying to schedule practices when cast members who are out for baseball, soccer and track can be there, but it’s important for them to have all those experiences.” 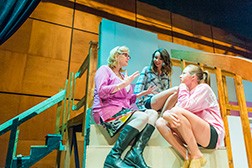 She speaks from personal experience. Ryan, the oldest of her three sons, was involved in music and theater for a while before turning all his attention to football. He’s now the co-owner and chief financial officer of the league champion Door County Destroyers semi-pro football team. Second son Devin was in all of Gibraltar’s musical productions, as well as being the school’s athlete of the year. A graduate of St. Norbert College with a major in education and a minor in theater, he’s now in his second year of teaching first grade at Gibraltar and is assistant director of this year’s musical. Youngest son Logan is a junior at St. Norbert, majoring in communications and minoring in theater.

“I used to worry,” their mom says, “that all the time they spent at rehearsals with me when they were little might have burnt them out on theater. Evidently, that was not the case. It’s part of who they are.”

Lizz’s husband, Kurt, technical director for the Door Community Auditorium, is an integral part of the musical productions and also builds the sets – amazingly complex for a small high school.

“I couldn’t do what I do without him,” Lizz says.

Sometimes small-school people have to be especially creative, as when all the students were asked to bring empty cereal boxes from home. They were painted different colors and became the shelves of library “books” in The Music Man. Lizz’s parents, who saw their daughter through her shy years, now live in Egg Harbor and continue to be among her most avid supporters.

“This year’s show [Legally Blond, the Musical] is about self-discovery and transformation,” Lizz says. “The kids love the music, and it’s easier for them to be engaged when they can relate to the characters.”

She’s especially pleased that a number of alumni from past musicals return each year to help out.

“It’s evidence that they had good experiences and want to continue to be involved.”

Lizz quotes lines from the funeral of a beloved fellow teacher who died a few years ago: “I want to be a candle that’s completely burned out, indicating that I gave as much as I could. I feel that I’m here to give light to others.”

“I’ve always been proud to be a teacher,” she says, “proud to be able to affect kids in so many different ways, and I embrace theater for all the life lessons it gives.”

She plans to teach – and direct musicals and work with forensics and one-act plays – for five or six more years. But before she retires, she hopes to start a small theater and music school that will eventually grow into a performance center – possibly a venue for the children’s stories and plays she has written that used to be performed at the old Open Door Children’s Theater.

Obviously, her candle still has a lot of burning to do.