In the wake of a May report recommending the razing of Peninsula State Park’s iconic Eagle Tower, Door County residents are wondering if the state will bother to rebuild the tower.

“We obviously do not have funding to accommodate every one of those projects,” said Kimberly Currie, Deputy Director of the Wisconsin Bureau of Parks and Recreation. According to Currie, a decision on what to do with the tower will be made in the next 30 to 45 days. In that time, Peninsula State Park officials and the Department of Natural Resources will explore their options.

At the heart of debate is the cost associated with tearing down and rebuilding a new tower.

“We’ve been really lucky that we have not had any significant tower issues,” said Missy Vanlanduyt, Capital Development Coordinator at the DNR. “Right now we’re looking at what the best method of removal of the tower is and that involves timing and what the budget looks like. We’re also looking at what our options are for future replacements.”

The DNR stated they they have no estimate for the cost of tearing down the tower or rebuilding a new one.

“You can look at similar structures nationally, but it really depends on the height of the tower, location used and access so it varies by hundreds of thousands of dollars,” said Vanlanduyt. “It’s different depending on the type of project.”

Currie also stated that officials will need to review compliance with the Americans with Disabilities Act, which may include elevators and ramps to the top of the tower, adding to the costs of rebuilding.

“Some of the ADA legislation is just rolling out so there’s a variety of opinions on what is in compliance,” said Currie.

Once the DNR has a cost estimate and finalized a decision on what to do, it may still be several years before visitors can climb the steps again.

Steve Sichau is the project manager for the Pacific Northwest Region of the Forest Service. In Washington and Oregon, they have been dismantling most of their wooden towers.

“The maintenance to keep them up and make them safe is cost prohibitive,” said Sichau. He explained that the original purpose of observation towers, to be watchtowers for forest fires and other emergencies, are now irrelevant with better technology. No one is in the wooden tower building business anymore.

“Wooden towers are quite expensive because they are all built by hand with individual bolts and it is quite labor intensive. Normally it’s cost prohibitive to do it,” said Sichau. 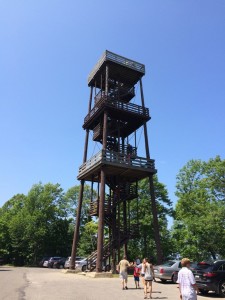 But Eagle Tower represents a unique scenario, as the tower is a symbol of Door County emblazoned on items like ball caps, logos, t-shirts, Door County Triathlon medals and is found in thousands of paintings and photographs. Peninsula State Park draws roughly one million visitors annually, a large percentage of whom stop to catch a glimpse of Green Bay from the tower.

Bill Tishler, author of A History of Peninsula State Park: Door County’s Emerald Treasure, writes that, while the original tower was built as a lookout, the rebuilt tower in 1932 was for viewing pleasure.

“It’s a landmark for the park. It was built to provide a view looking out over Green Bay so you could see across the bay,” said Tishler in an interview. “It may have had the alternate use for searching for fires, but that wasn’t as much of its purpose.”

“We plan seven years of projects at any one time. They need engineering, site work and background information before we embark on any major construction,” said Currie.

The projects are included in the biannual state budget, but Currie stated that the Eagle Tower project is too late to make it into the 2015-2017 budget.

But there is hope for a streamlined project.

“We could look at what projects we could defer,” said Currie. “Anything that happens is probably going to be at the expense of another planned project.”

May Report Lead to Closure

A report submitted by Edge Consulting Engineers May 20 recommended that Eagle Tower be torn down and replaced after an inspection revealed structural deficiencies. On May 21, the state park closed the tower to public use.

All officials agreed that public safety is the primary concern of the organizations involved.

“I think that it’s important that, if there were structural concerns that it was inspected before the high use season,” said Erin Brown, assistant superintendent at Peninsula State Park. “We know that it’s a high use facility, a lot of people come to Peninsula State Park to climb that tower. We can see areas on the exterior where visually from the outside we thought that they should be looked at with a little bit more knowledge and experience.”

Edge inspected the tower in April and reported many elements of the tower are inadequate.

“Based on our field inspection and analysis, it is our opinion that the existing observation tower structure is not structurally adequate to support the superimposed loading conditions and should not be utilized in its current condition,” said the report.

The report determined everything except the tower legs and the tie rod bracing on the third level to be inadequate in supporting the loads.

Collectively, the structural deficiencies of the tower call for replacement instead of repair.

The state park will now coordinate with the DNR as they enter into the summer season with a main attraction closed down.