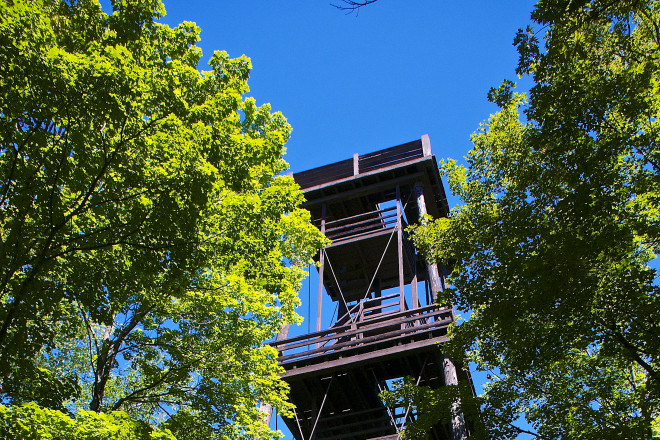 It was déjà vu at Stone Harbor Resort on May 1, as officials from the Wisconsin State Park system explained the findings that led to the closure of Potawatomi State Park’s tower on April 3.

“We went through the same questions with Eagle Tower, and they’re good questions,” Ben Bergey, director of the State Parks System for the Department of Natural Resources (DNR), told a crowd of about 40 residents.

The DNR brought in Bob Ross, a wood expert with the U.S. Forest Service, to run the same tests he used to make the determination on Eagle Tower three years ago.

“Basically I’m getting almost identical numbers in data for those timbers in Potawatomi and I’m seeing the same trends that we saw for Eagle Tower,” Ross said.

Ross said the tower as originally constructed had a life of approximately 30 to 50 years and credits the DNR’s maintenance for extending the usable life of the structure to 90 years.

“If they hadn’t done that maintenance I think [the towers] would have been gone years ago,” Ross said.

But in true Sturgeon Bay form, no stone was left unturned in the search for options to repair and reinforce the tower without deconstruction or replace the structure without compliance with the Americans with Disabilities Act (ADA), which has increased the cost to rebuild Eagle Tower approximately five times. Some in attendance bristled at the constant comparison to the more popular park to the north.

Many asked questions or lobbed theories on how to avoid the need for ADA compliance, particularly given the tower’s historic nature.

Missy VanLanduyt, Recreation Partnership Section Chief with the DNR, said the tower is not in the historic register and, because so many parts have been periodically replaced on the structure over the years, it may not qualify.

Rep. Joel Kitchens said there is no bureaucratic system in place to vet projects for ADA compliance.

“All you can do is build it and let them determine afterward if they want to sue you,” Kitchens said.

Christie Weber, a leading figure in the restoration of Sturgeon Bay’s steel bridge and salvaging of the Granary, asked for Ross’s data to be cross checked with a third party.

“We would be really interested in getting that information before a decision is made,” Weber said. “I’ve heard a lot of fear without a lot of fact.”

Ross’s data will become publicly available once it is vetted through the U.S. Forest Service and DNR. The data on Eagle Tower is already available.

Another resident in attendance likened the situation to the granary, saying, “We had one idiot fire department guy who said it was dangerous….We get these idiots that don’t know what they’re talking about.”

Bergey addressed the public skepticism the DNR experienced in the decision to take down Eagle Tower. The DNR provided two structural engineering reports for Eagle Tower in addition to Ross’s data, all concluding the tower should be removed.

“Quite honestly the public didn’t believe those reports,” Bergey said. “I often feel this sense of ‘us versus them’ and I’m usually the ‘them’….We will work together to make a good decision on the future of the tower but there’s a couple of things we’re not going to do. We’re not going to do anything illegal. We’ll make good decisions based on science and we’ll work together.”

“If you guys want to take my data to an outside engineer that’s fine,” Ross said. “I can pretty much tell you what they’re going to say.”

There was not much of an appetite to launch a fundraising campaign for a new tower, which could come at a cost of up to $2 million using estimates for Eagle Tower’s reconstruction.

Kitchens said he would look at trying to get matching funds similar to the $750,000 match provided by the state for Eagle Tower if there was a local group committed to lead the fundraising campaign. There were murmurs of the Friends of Potawatomi State Park or the newly formed Sturgeon Bay Historical Society spearheading the project, but the murmurs fell short of a commitment.

VanLanduyt said the master plan for DNR properties including Potawatomi State Park will be released to the public for comment in the next few weeks, adding that the plan allows for a wide variety of recreation opportunities and infrastructure possibilities in the park.

Kitchens suggested that, if fundraising efforts do not materialize, he would like to see some scenic viewing infrastructure in the park to replace the tower.