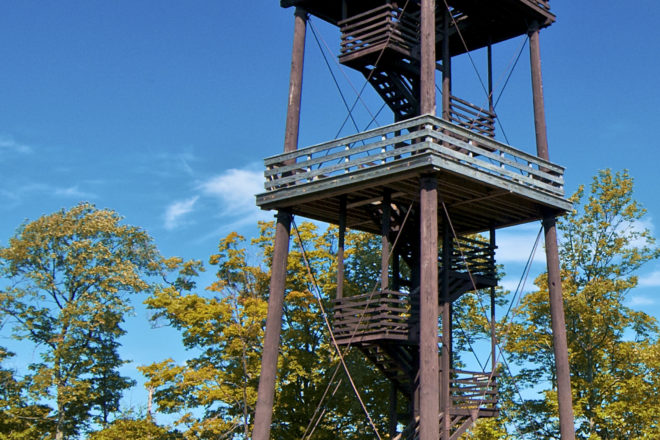 Eagle Tower before it was deconstructed in 2016. Photo by Len Villano.

Editor’s note: Representatives from the Department of Natural Resources met with the Friends of Peninsula State Park after Pulse press time this week regarding Eagle Tower.

The Department of Natural Resources (DNR) is expected to reveal Eagle Tower design plans for public comment in the next few weeks. Compliance with the Americans with Disabilities Act (ADA) is a challenging piece in the design plan puzzle. We dissected ADA standards and looked at ways similar structures are built around the United States.

Across the country, public and private organizations have found creative ways to comply with ADA standards while others have been forced into higher standards at a higher cost. The Department of Justice revised ADA standards in 2010 and guidelines are vague when it comes to unique structures such as Eagle Tower.

The DNR’s Disability Advisory Council (DAC) was equally vague in their recommendation for Eagle Tower’s reconstruction. The council is made up of nine citizens appointed by the DNR secretary who have some experience with disabilities. They advise the DNR on making the department’s programming and facilities more accessible.

The council’s motion on Sept. 22, 2016, advised the DNR to comply with ADA standards in regard to Eagle Tower. If there are any questions, refer to the Department of Justice or the United States Access Board, an independent federal agency.

The DAC’s recommendations are not binding, but they are highly valued

Representative Joel Kitchens said he had not heard of the DAC before conversations regarding Eagle Tower. He added that the DNR may encounter legal challenges in construction if they don’t fully comply with expected ADA standards.

After a mysterious arson fire destroyed a 35-foot observation tower at the park in 2011, the parks department looked at building a new one.

“We were all set, ready to go, and then when they went in to get building permits they were told we’re going to need ADA access,” said Paul Cozzie, Parks and Conservation Resources Director in Pinellas County. “Our consultant tried to argue that we could use it for fire lookout observation or there’s something about wildlife viewing platform that provided an exemption but they couldn’t make any of those arguments stick.”

Cozzie said the tower was completed three years ago but has been closed to the public until an ADA accessible ramp is built next to it, which he hopes will be complete by the end of 2017. That ramp increased the length of time to rebuild the tower as well as the cost.

There are a few exemptions to ADA accessibility, but Kenneth Shiotani, senior staff attorney with the National Disability Rights Network, doesn’t think any of them apply to public observation towers.

“If the old tower is gone and they want to build a new tower, the ADA does look at new things as, generally, they have to be built accessibly,” said Shiotani.

Shiotani said structures dedicated to public safety that are generally off limits to the public are exempt from ADA requirements, such as prison towers, referee stands and fire towers.

While Eagle Tower was once built as a fire tower, it is open to the public and gets more use as a tourist attraction than for fire safety.

Similar to a video, a wildlife viewing platform in Florida’s Lake Kissimmee State Park installed a panoramic image taken from the top of the tower on the ground level, although park staff did not know if that was in response to ADA standards.

Any unique steps taken to come into ADA compliance typically take a liberal interpretation of the ADA standards’ Equivalent Facilitation section, which allows for alternate ways to provide the same experience for those with disabilities.

The privately owned Holden Arboretum in Kirtland, Ohio, erected a 120-foot tower in 2015 that is not ADA-compliant, but a 500-foot walkway through the canopy 65-feet above the ground is wheelchair accessible.

The arboretum did not hear anything about ADA accessibility when receiving its building permits or during construction.

The Department of Justice, which publishes the ADA standards, does not have a process for approving or certifying Equivalent Facilitation, leaving proof up to the parties involved in any lawsuit that arises.

Any options outside of this Equivalent Facilitation standard will be costly.

In the 2016 meeting minutes for the Disability Advisory Council, DNR Capital Development Coordinator Missy VanLanduyt said an elevator would increase the cost of construction anywhere between $1.5 million and $4 million, including burial of electric lines through the park, likely taking that option off the table.

The DNR may use a viewshed analysis study to determine ADA compliance. The study would reveal at what elevation a scenic view diminishes. If there is an equally incredible view of Eagle Harbor at 40-feet, the department may be able to extend the tower higher without making the taller portion ADA compliant.