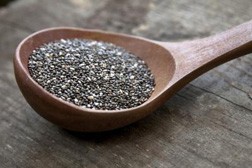 For decades, chia seeds were used in ceramic figurines, serving as the hair for Homer Simpson, Mr. T and Barack Obama as Chia Pets. Now, they are understood as one of the most nutritional foods in the world.

These seeds have been a part of Central American diets for centuries before the Chia Pet hit the market. Popular for the Mayan and Aztec civilizations, they were frequently consumed in drinks or made into a gelatin-like substance, which is still a popular option for athletes.

Similar to the flaxseed, chia seeds are packed with omega-3 fatty acids, which help grow and protect neurons in the brain. Omega-3s are elusive in the American diet, primarily consumed in fatty fish such as salmon, but one tablespoon of chia seeds can provide all the omega-3 fatty acids you need in a day.

Chia seeds are also big on fiber, which improves the health of the gut, protein and micronutrients such as iron, calcium and zinc.

In understanding the beneficial consumption of seeds more broadly, think about how each tiny seed has enough nutrient content to grow into a full plant. Packed into a small seed and easily added to smoothies, baked goods and salads, chia seeds offer one of the biggest nutritional bang-for-the-buck out there.