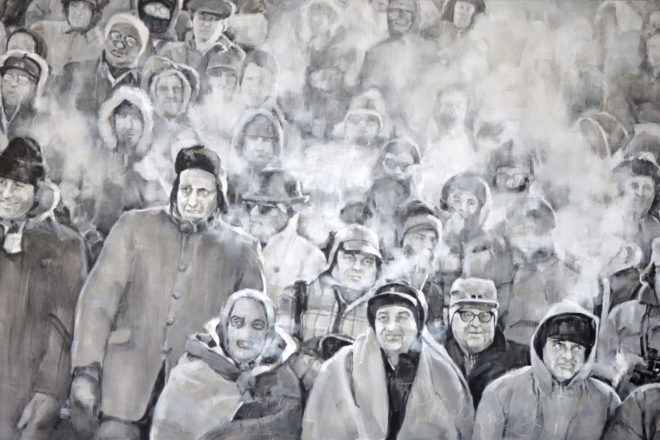 Tom Nachreiner has huddled against his bleacher-mates in chilling rain and blustery autumn weather to watch his beloved Green Bay Packers take on their rivals at Lambeau Field, but he’s never once donned a snowmobile suit or risked life and limb to watch the green-and-gold-clad warriors take to The Frozen Tundra.

So when the oil painter stood before a blank, 5.5’ x 8’ canvas to re-create a scene from the most iconic game of the franchise’s history – the 1967 NFL Championship Game, appropriately dubbed the Ice Bowl – he drew from two important sources: historic photos from the Green Bay Press-Gazette and his own memory of watching the Packers-Cowboys game from the warmth of a living room during his junior year of college. He remembers the weather reports – the game-time temperature of -15 degrees, the average wind chill around -36 degree – and stories of referees nearly losing their lips to their frozen whistles. 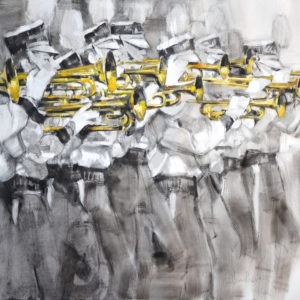 “I’ve talked to Dallas people since and they say that was a fixed game,” Nachreiner said, referring to reports that Dallas players believed head coach Vince Lombardi had deliberately removed power to the field’s heating coils. “The Cowboys weren’t used to cold weather and they just came up and froze their butts off on The Frozen Tundra.

“I remember seeing on TV and all the reports of how cold it was,” he continued. “That gave me a gut feeling of what it was I was trying to accomplish in the painting.”

That “painting” he referred to is “Ice Bowl Heroes,” one of four large-scale paintings Nachreiner created for The Green Bay Packers Collection, a newly unveiled, permanent display of original art and historic photographs in the club levels at Lambeau Field. The display is the culmination of a partnership between the Green Bay Packers and Sports And The Arts, a national company that partners with professional sports franchises to develop, curate and implement fine art collections in their venues.

The collection features nearly 150 pieces of art commissioned from 19 artists from across the United States working in textiles, found objects, mixed media, pencil, oil and acrylic. It also highlights more than 500 rarely seen historical photographs provided by the Green Bay Press-Gazette, Pro Football Hall of Fame, the Associated Press and other sources.

Nachreiner is a Delafield, Wis. oil painter whose involvement with the Lambeau Field collection stems from his relationship with Edgewood Orchard Galleries in Fish Creek.

Last fall, Green Bay Packers President and CEO Mark Murphy and his wife Laurie contacted Edgewood Orchard Galleries’ owners J.R. and Nell Jarosh for input on the project. The Jaroshes have worked with the Murphys and Packers organization before, J.R. explained, so when they were asked to recommend some Wisconsin artists for consideration, he put forward Nachreiner’s name.

“I knew that he was a passionate painter and always challenges himself to continue to improve,” J.R. Jarosh said. “Even though he’s very successful as an artist, he doesn’t just sit back and take the easy road.”

Nachreiner’s selection for The Green Bay Packers Collection jumpstarted an extensive process that included a studio visit and interview with representatives from the California-based Sports And The Arts, creation of an artist’s plan, and finally, review and selection of the photographs he would use as reference in his paintings. 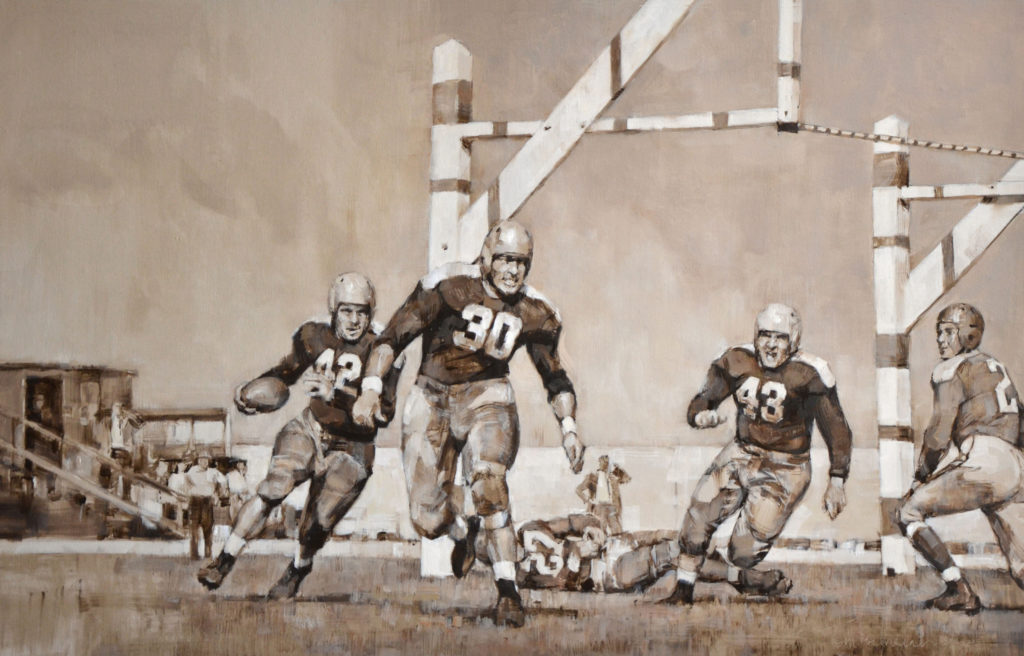 Working in a limited palette, Nachreiner painted from four photographs spanning from the 1930s to the 1960s.

“I’m known as a colorist and all the pieces I did were very limited in color which was extremely fun for me to do because it was different and challenging,” Nachreiner said. “…It said more about history than if I had tried to do them in full color.”

The result is four, large-scale paintings celebrating every facet of the Green Bay Packers organization: the fans, the entertainment, the players and, as evidenced by the vapors rising from a frigid collection of fans in a painting appropriately titled, “Ice Bowl Heroes,” – the passion that comes from loyal followers of this community-owned team.

“That’s why I wanted to do it so badly, too,” Nachreiner said. “I’ve been a Packers fan my whole life as probably most people can say…Because I love the Packers so much, there was inspiration there.”

The Green Bay Packers Collection is on display in the suite and club levels of Lambeau Field, with some work viewable during stadium tours. Nachreiner also has a solo show on display at Edgewood Orchard Galleries through Sept. 19. A reception for his show and the group show, Abstraction, will be held from 4 – 7pm on Saturday, Sept. 2. Nachreiner will conduct a painting demo from 1-3pm on Sunday, Sept. 3. For more information, visit tomnachreiner.com or edgewoodorchard.com.