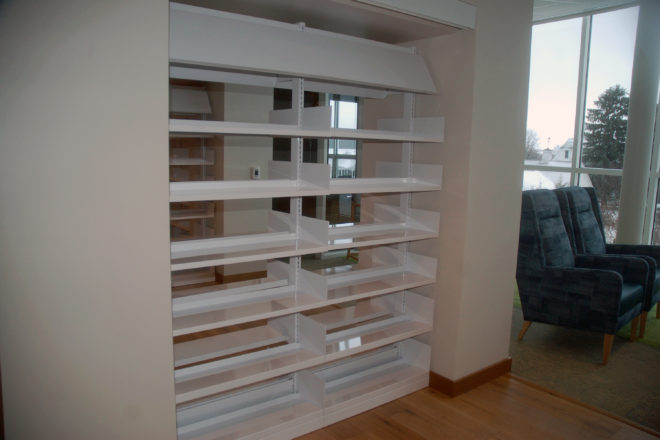 Say goodbye to the cramped quarters of the old Egg Harbor library. As of Jan. 29 it will be no more.

Door County Library Director Tina Kakuske confirmed that the old library squished in between village offices and the U.S. Post Office will open its door to the public a final time on Jan. 27 before closing for good while the move begins on Monday, Jan. 29, to the new space across the street in the new Donald and Carol Kress Pavilion.

Made-to-order shelving for the new library went in this week in preparation for the move. Kakuske said Yerges Van Liners of Fort Atkinson, Wis., has been hired to do the move. On Wednesday, Kakuske asked her library board to close the Egg Harbor Library for the entire week of Jan. 29-Feb. 3.

“January 29 is the official move day,” she said, “but we asked for the entire week, just in case. Rest assured, we will open as soon as it is ready.”

While she has not yet heard much buzz in the larger library community about Door County’s newest branch library, Kakuske expects once it opens, word will soon spread about the library in its remarkable location, with room to explore the library collection and plenty of space to relax in the spacious open community areas.

“It’s a beautiful building in such a wonderful community,” Kakuske said, adding that there will no doubt be discussions of submitting the Egg Harbor Library in a national library design competition.

She said if everything goes as planned, a soft opening of the library will be held Feb. 6, and a bigger open house Feb. 17. The entire building will have a grand opening May 19, and one of the scheduled speakers is Plumer Lovelace, executive director of the Wisconsin Library Association.