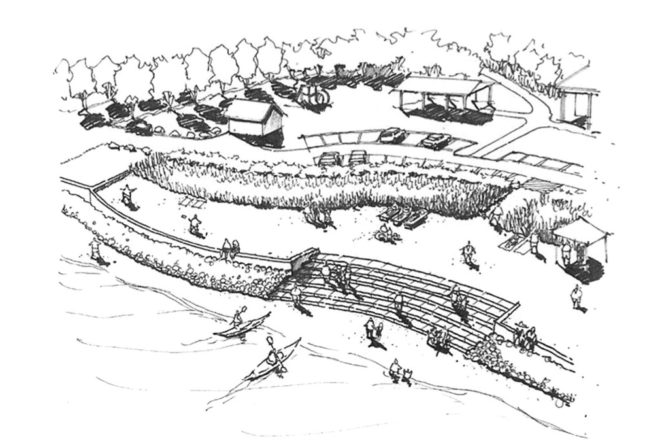 The Village of Egg Harbor is going to explore a “perched” beach option, but it will extend farther north than shown in this rendering.

The Egg Harbor Village Board decided at its Sept. 12 meeting to seek bids for its new library/community center in order to get more precise costs for the project.

As it stands now as an architectural concept, the building and its furnishings will cost in the neighborhood of $6 million, with $1 million committed to the project by the village, and an offer from village resident Don Kress to provide another $1 million if the village does the same.

Village President Joe Smith asked how far along the fundraising is for the project.

“We like to say we are one big donor away from completion,” said Library Ad Hoc Committee member Bart Ahern, adding that he was talking in the range of a $750,000 to $1 million donation, and was including the matching donation offer.

“But we have not identified that potential donor yet,” Ahern said.

Concerned by the escalating cost of the project, Library Ad Hoc Committee Chair Bob Dickson said committee members have been looking at options to reduce the cost of this public/private partnership, adding that right now donations amount to about 35 cents on the dollar.

The library/community center will be located on the property where the Lighthouse Inn now sits at 4639 Orchard Road. It was suggested that someone could buy the inn and move it, but Heise said if that doesn’t happen, there is money in the budget to demolish the building if that is necessary.

The board also discussed beach improvements that have been reviewed by the Parks and Public Works Committee. Saying there have been challenges with designs that are acceptable to the Department of Natural Resources, Heise said a concept the department does like is a “perched beach,” with stepped or ramped access to the beach (see rendering), at an estimated cost of $500,000. Heise said the village has $10,000 billable hours remaining with the engineering firm SmithGroupJJR, and they say for that amount they can complete the design, review it with the DNR and in November pursue a Coastal Water Management Grant to be used for construction design in the winter. Heise explained that the next grant opportunities come in the spring, but are not awarded until mid-summer.

“Then this group will have to decide on waiting for grants or start the work in the spring,” Heise said.

“Is it reasonable to think we can get the beach done by this summer?” asked village trustee John Heller.

Heller suggested expanding the project north to the kayak rental area and asked that the design firm put some concepts together.

The issue was sent back to the Parks and Public Works Committee to expand the perched beach concept to the north.

Also on the agenda was the Enhance Egg Harbor project. Heise said the village has received a good deal of correspondence on the issue, which shows, along with comments made at recent meetings, that there is a lot of misinformation out there about the project.

Trustee Paula Cashin said she has never seen an economic impact statement on what this $6 million project will ultimately mean for the village.

The project calls for widening the sidewalks and narrowing Hwy. 42 to slow down traffic through village.

“Narrowing the road will keep people out not draw them in,” Cashin said, adding that people come to Door County for a variety of reasons, and that shopping is way down the list of those reasons.

“We’re asking too much from taxpayers,” Cashin continued. “Hold off and finish what we’ve already started – the library, Church Street, walking trails, Highway G sidewalks all the way down to the beach…. Let’s put a municipal water system in to benefit everyone. I just think this is real shortsighted.”

Trustee Heller said he would like the board to have a thorough discussion of all capital projects.

“We’ve got a lot of areas to spend money and I think we have to give some real serious thought to what our priorities are,” he said.

The Parks and Public Works Committee was asked to take a stab at distilling the questions in the correspondence down to the most frequently asked questions and present them to the full board to consider in time for an Oct. 10 meeting on the project.