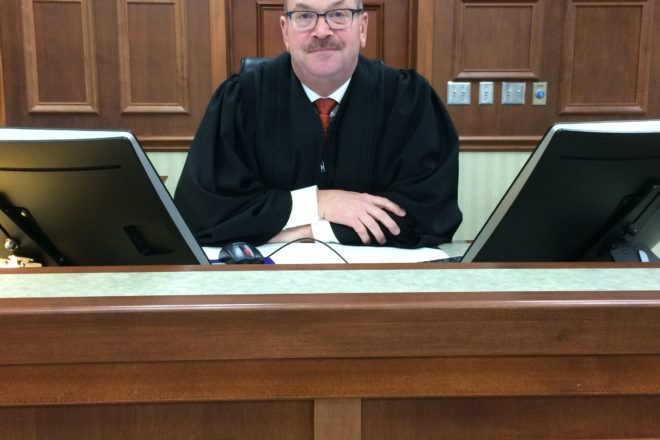 Judge D. Todd Ehlers announced his intention to seek re-election to the office of Circuit Court Judge for Branch I in Door County. The 2018 Spring election is scheduled for April 3. Ehlers was first elected to this position in 2000 and has since been re-elected twice, in 2006 and 2012. Prior to his election in 2000, Ehlers had been in private law practice for 18 years in Sturgeon Bay. In addition to that practice, Ehlers also served as Assistant Corporation Counsel for Door County from 1985 to 1987 and had been a Door County Court Commissioner from 1997 until his election. In addition to his duties as one of Door County’s judges, since 2010 Judge Ehlers continues his work on the Wisconsin Criminal Jury Instructions Committee. On that committee, Ehlers, along with 10 other judges from around the state, drafts and edits the criminal jury instructions used by Wisconsin courts as statutory and case law changes occur. Earlier this year he assumed the chair of that committee. In October of 2012, the Wisconsin Supreme Court appointed Ehlers to the Judicial Conduct Advisory Committee, which renders formal advisory opinions and gives informal advice to judicial officers in Wisconsin concerning the compliance of contemplated or proposed future conduct by those officials with the Wisconsin Code of Judicial Conduct. The Supreme Court in 2015 appointed Ehlers as chair of that committee.

Ehlers, a Door County native, grew up on his family’s dairy farm in the Town of Sevastopol and graduated from Sevastopol High School in 1975. He graduated cum laude in 1978 from St. Norbert College with double majors in History and Political Science and earned his law degree from Marquette University Law School in 1982. Ehlers, 60, resides in the Town of Jacksonport with his wife, Cynthia Zellner-Ehlers, who is the Children and Families Program Manager for the Door County Department of Human Services. The Ehlers have two adult children and recently welcomed their first grandchild. “It is hard to believe that next year will be the 18th anniversary of my taking the bench here in Door County,” said Ehlers in announcing his re-election plans. “It continues to be my extreme and humble honor and pleasure to be one of Door County’s circuit court judges and I relish coming to work every day making decisions that affect people’s lives. It is my hope to have the opportunity and privilege to serve in this important position into the future.”