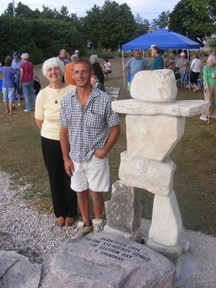 • August 12, the Ellison Bay Service Club hosted a unique historic event – the dedication of a cairn at Wills Park on the shore of the harbor at the foot of the bay.

Throughout what is now North America, native peoples have used cairns as trail markers for thousands of years. But this cairn is far more than a marker, and it isn’t just a “heap of stones.”

Ellison Bay resident Steve Shumway designed and built the cairn in the form of an Inuit Native American inunguak (imitation of a person) or German Steinmann (“stone man”). Thus, it not only serves as a symbolic harbor master; but also literally stands for the community’s character, its inscription reading: “Dedicated to the steadfast spirit of Ellison Bay.”

How appropriate, then, that the sculpture is situated in Wills Park near the historic Pioneer Store, Viking Grill restaurant and Bayside Resort, all of which incurred extensive damages in recent years but have been faithfully restored by their resident owners.

The Shumway cairn was sponsored by the Ellison Bay Service Club, working to develop projects, programs and services that benefit the community of Ellison Bay and the surrounding area.

The Ellison Bay Service Club encourages and welcomes participation by seasonal as well as year-around residents.

• Northern Door Children’s Center (NDCC), located in Sister Bay, recently learned that it is no longer able to sell raffle tickets for its annual car fundraiser via phone, Internet, or through the mail. This announcement marks a significant change for the organization, which has been conducting the raffle for eight years.

According to the Wisconsin Division of Gaming, raffle tickets for a charity raffle must be purchased in person. In the past, NDCC estimates that more than one fourth of the tickets sold were through the mail, Internet fliers, or by telephone. NDCC was hoping to sell 2,500 tickets in this year’s raffle, but with the new change Executive Director Cindy Trinkner-Peot estimates the numbers will be much lower.

Now, more than ever, NDCC will be counting on the support of the local community to make the car raffle a success. Approximately 25 percent of NDCC’s annual revenue comes from fundraising, and the car raffle is its biggest fundraiser of the year.

This year, the raffle car is a 2012 Fiat 500. NDCC’s benefactor, Judith Blazer, has donated the car again this year. The drawing will take place on October 23, 2011 at 2 pm at Northern Door Children’s Center. However, entrants need not be present to win.

Tickets are $20 each and can be purchased in person at a variety of local businesses, including the center itself and also from friends and family of NDCC. Raffle tickets will also be sold at the festivals in the area this fall, including Fall Festival in Sister Bay and Pumpkin Patch in Egg Harbor. For a complete list of locations, visit http://www.northerndoorchildrenscenter.org or call 920.854.4244.

• The Women’s Fund of Door County is now accepting applications from local charities for its Fall 2011 Grant Cycle.

Submissions for initiatives that support the well being of women and girls are welcome.

The Women’s Fund seeks to utilize the ideas and expertise of non-profit groups and community agencies to confront and solve issues of relevance to Door County women and girls. Special consideration will be given to applications that are collaborative, innovative, and include women and girls in their planning and implementation.

Priority is given to those projects that provide education and information, build self-esteem and dignity, help solve critical issues and are research-based and data driven.

Guidelines and applications materials are posted online at http://www.womensfunddoorcounty.org. Grants in amounts up to $2,000 will be awarded.

The Women’s Fund of Door County is a component fund of the Door County Community Foundation, Inc.

• The friends and family of Steve Klaubauf will be hosting a cancer benefit in his honor on Saturday, August 27 at the Draft Haus Sports Bar and Banquet Hall in Sturgeon Bay.

Steve had just started a new job at Griffin Industries Corp in Green Bay when he was diagnosed with esophageal cancer in February of 2011.

Steve endured a lengthy series of chemo and radiation treatments. He underwent surgery on July 6 in an attempt to remove the tumor, but doctors were unable to safely complete the procedure. Options for a second surgical attempt are being explored.

The benefit will include live and silent auctions, raffles, games, door prizes and a wild game feed. Auction items include a Kareem Abdul-Jabbar autographed basketball, night stays at many Door County resorts, collector prints, a sailing cruise, tickets to sporting events and more. All proceeds will go to the Klaubauf family to help defray continued expenses.

Doors will open at 11 am. Entertainment will be provided during the afternoon by DJ Wags and the Big Dawg’s Jeff Stone. Stone Sober will play after the live auction in the main bar beginning at 7 pm.

Donations of raffle and auction items are also welcome. For more information call 920.743.8795.

The Draft Haus is located at 901 Egg Harbor Roadd (Business 42/57) on Sturgeon Bay’s east side.

• In recognition of the time and talents that were exhibited at the Door County Fair, Grand Champions and Champions were selected from the Open Class Home Arts Departments.

The Grand Champion in the Home Furnishings and Needlework department was Susie Herland for her counted thread embroidered picture. Champions included Theresa Kinnard, Jean Smejkal and to Sue Shortall.

In the Photography department, the Grand Champion ribbon went to Dale Crass for his non-colored spider photo. Champion ribbons were awarded to David Harsh, Sandra Simonar and Pum Chairin.

In the Foods department, the Grand Champion was Lisa Mueller for her quick bread. Champion ribbons were awarded to Helen Ploor, Tim Hitzman and Lisa Mueller. The three Red Star Yeast Awards, which consisted of a pizza cutter, a silicone spatula and oven mitts, were presented to Tim Hitzman, Helen Ploor, and Beverly LuMaye.

In the Knitting and Crocheting department, the Grand Champion ribbon was awarded to Laura Meikle for her crocheted adult sweater. Champion ribbons were awarded to Helen Schimmelpfennig, Tasha Rass and Ricki Mitchell.

For more information or to submit materials for next year’s fair visit http://www.doorcounty.org/fair.

• The Kasisi Children’s Home in Lusaka, Zambia, will receive 100 percent of the proceeds from a sale featuring African beads, handmade baby sweaters, folk art quilts and table runners and hand-crafted dolls. The sale will be held on September 3 from 9 am – 3 pm at Green Roof Farm, located at 2856 Maple Grove Road East in Fish Creek.

Kasisi Children’s Home provides love and protection, basic needs, spiritual care, and education so that these children will be self-supporting in adulthood. All the children attend elementary school, and Kasisi supports them in further education or in finding a job.

The 250 children it cares for arrive from all provinces of Zambia, referred by social welfare workers, police victim support, refugee centers, and hospitals, as well as from the streets and from the communities. About 60 of these children are living with HIV/AIDS.

Kasisi Children’s Home does not receive government assistance. It is completely self-supporting, depending on donations from individuals and organizations worldwide. For more information visit http://www.kasisichildren.org.

• The Sister Bay Centennial Committee has announced a T-shirt design contest to design a logo for the centennial celebration to be printed on T-shirts available during the celebration. The village’s centennial will be celebrated with events on June 8 – 9, 2012. The logo contest is open to anyone. The design will be printed on the front of the T-shirts and should represent the centennial theme. The deadline for entering is February 1, 2012. Entries can be mailed to Centennial T-Shirt Design Contest, 10372 Hwy 57, Sister Bay, WI 54234 or they can be emailed to [email protected].

• Zion United Methodist Church will hold the second of its two annual hymn sings at 6:30 pm on September 4. Begun in 1993 at the 136-year-old country church, the activity features old-time hymns picked by the audience. The Rev. Don Heeringa, a former Zion pastor, will serve as song leader.

The entire community is invited to attend. Past hymn sings have attracted as many as 146 people from 13 different religious denominations. The free-will offering will be donated to Northern Door Child Care Center for tuition assistance and to the Sister Bay Branch of the Wellness Center of Door County for client services. Since 2002, Zion’s Hymn Sings have raised nearly $15,000 for agencies that benefit people in Door County.

Refreshments will be served.

Zion is located at 8781 County F, between Baileys Harbor and Fish Creek.