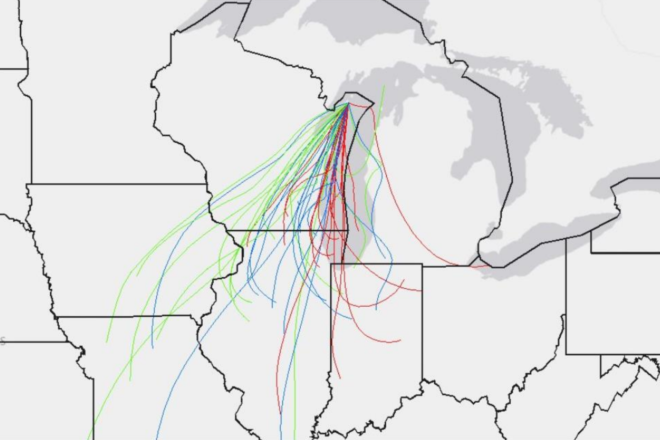 Maps show how ozone pollution travels across Lake Michigan and ends up at the air quality monitor at Newport State Park.

The Environmental Protection Agency (EPA) released its final ruling on the districts in Wisconsin that are polluted with ozone. The agency significantly narrowed the areas of the state that are considered in nonattainment, or areas that would be subject to greater environmental regulation, at the urging of Wisconsin officials.

Ozone pollution in Wisconsin, particularly the areas north of Milwaukee, have long been attributed to urban ozone wafting across Lake Michigan from Chicago and northwest Indiana. Air quality monitors at Kohler Andrae State Park in Sheboygan and Newport State Park have consistently registered high levels of ozone despite not having any major ozone emitters nearby.

In 2015, the Obama administration tightened these ozone rules, raising the bar for what would be considered clean air. The EPA was then tasked to review pollution levels around the country and classify them as either in attainment (clean) or nonattainment (polluted). States will then need to submit a plan to the EPA on how it would clean up the ozone pollution.

In 2016, Wisconsin and other states sued the EPA over the new standards, claiming the states had no jurisdiction over ozone that floated in from nearby states.

In their review, the EPA ruled nine counties in the eastern part of the state as nonattainment. Gov. Scott Walker then requested, with data from the Department of Natural Resources on ozone traveling across Lake Michigan from Illinois and Indiana to back it up, that the entire state be considered in attainment.

On May 1, the final rulings showed significantly narrowed nonattainment zones, leaving out much of southeastern Wisconsin where most of the state’s manufacturing takes place.

In Door County, the EPA narrowed its nonattainment zone to the boundary of Newport State Park, meaning the state will have to come up with a plan, subject to EPA approval, to reduce ozone pollution at the park.

When it comes to urban nonattainment zones, a state can typically enforce stricter emissions standards on polluters or try to reduce vehicular traffic. With no new factories planned within the Newport State Park boundary and a wilderness philosophy that already limits vehicular traffic significantly, it is unclear what Wisconsin can do to reduce ozone levels at the park.

The EPA has come under scrutiny for leaving the upcoming Foxconn liquid crystal manufacturing facility out of the nonattainment zone. While the agency originally called for the entire county of Racine to be in nonattainment, the final rules exempt it from stricter ozone requirements.

If the new Foxconn plant would have been in a nonattainment zone, it would have had to decrease its emissions at its own cost. Illinois Attorney General Lisa Madigan is filing a lawsuit against the EPA for reducing Wisconsin’s nonattainment zones, citing Foxconn as a major polluter that is benefitting from the ruling.