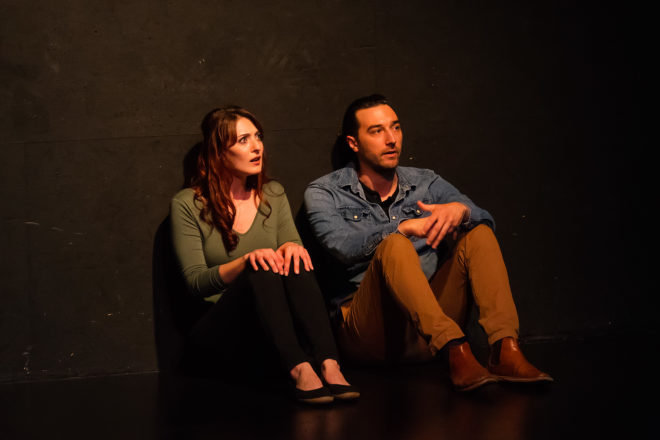 Third Avenue Playhouse is putting on a show far unlike the many before it. Lungs, which premiered June 28, is a play by British playwright Duncan Macmillan. Cast members Nick Narcisi and Elodie Senetra tell the story of two people navigating the sometimes unclear waters of being in a relationship, and one that spans the length more than 40 years.

Yes, the cast includes only two people. That’s not the only surprising thing either — there are no props or costumes or scene changes. Both performers chalked it up to one of the most challenging, but most rewarding, plays they’ve ever been a part of. The Pulse sat down with them at the theater, along with Director Robert Boles, to chat about the show.

Lungs came to the attention of all three from repeated outside recommendations. The universe seemed to be conspiring against him to read it now, Boles said. Narcisi shared how when he finally read it at the Denver airport, he found himself sobbing and joked about being mad at his friends for being so right about how good it was. Senetra was excited to share the cinematic and intimate qualities of the play.

There are certain challenges in this play the actors have to overcome. The lack of props means there’s nothing for them to hide behind. They also only have each other to rely on — if one of them loses track for just a second, they’re in trouble, Senetra said. Still, the beauty and emotion within the play far overshadows these things.

“I kind of love it,” Senetra said.

Because of the absence of props and scenery, it allows the play to open up on a new level to the point where the audience can use their imagination to fill in those gaps. The audience is left with just the story, making it more raw and real.

The script is quite unusual, too. All it is is a conversation between a couple whose relationship twists and turns during a long period of time and one that jumps from place to place, sometimes from one line to the next. It’s a fast-paced show, sort of like a stream of consciousness, Senetra said. Both actors agree the conversation is so stunningly natural, it sometimes makes the lines harder for them.

Yet aside from what differences this play might present, it’s unyieldingly universal. The material of the play is stuff we encounter in our everyday lives. Narcisi has lines in the play that he’s said in his real life.

“Everybody should be able to recognize almost everything that happens, not only the sound of the dialogue, but the situations that occur, the emotions,” Boles said.

Since Senetra and Narcisi have found themselves relating to it so closely, they are excited to see how the audience will react during the show. Will people shift in their seats, they wondered?

To Boles, the audience often becomes another character in this way, and it’s even more true in the case of Lungs, he said.

The hope is that not only will audience members relate to this show, but they will learn from it. Senetra’s hope is people will discover more about themselves through the characters and they might feel more comfortable talking about it.

Boles believes this show is going to be quite the conversation starter. Being able to see how the two characters in the show relate and react to each other, perhaps audience members will walk away comparing that to their own relationships.

Lungs contains strong language and frank discussions of sex. The play runs June 28 through July 21 with performances at 7:30 pm Wednesday through Saturday and 2 pm Sunday. There is no show on July 4. Two other performances will be held July 3 & 19 at 7:30 pm. Tickets are $28 for general admission and $12 for students. For more information or to buy tickets visit ThirdAvenuePlayhouse.com.