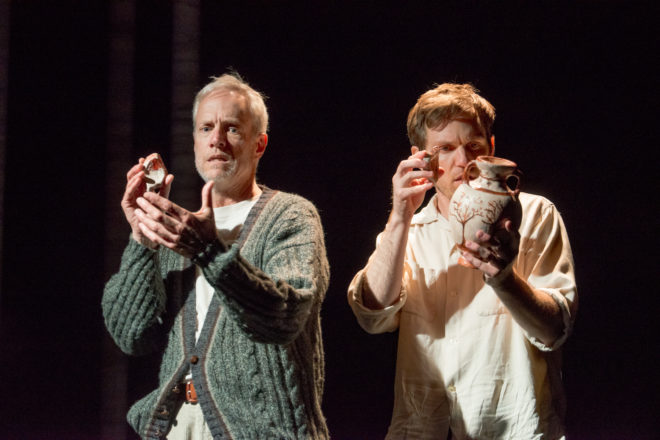 Present-day Jamie (left) and his younger self come together at times during TAP’s “The Dig.” Photo by Heidi Hodges.

Traversing time, memory and myth, The Dig – now on stage at Sturgeon Bay’s Third Avenue Playhouse (TAP) – follows Mattie and her older brother, Jamie, as they struggle to piece together the truth about themselves and the provenance of a hotly contested Lebanese pot. Throughout the play, Mattie’s exploration of her brother’s schizophrenic break while on an archeological dig 30 years prior is layered with her struggle to come to terms with her brother’s mental illness and his coded attempts to explain the past to his sister. Incorporating these layers and more, The Dig tells an authentic story that keeps the audience guessing, laughing and, at times, aching.

As the story progresses and time begins to blur, the actors physically cross into different spaces on the stage, as if stepping across time and space. Perhaps the most poignant of these blurrings occurs when young Mattie and young Jamie frolic through the trees that surround present-day Jamie in his solitary chair.

Throughout the play, Moeller transitions seamlessly from eight years old to 40 years old within seconds. Through a barely perceptible, but very effective loosening of her limbs and widening of her eyes, Moeller signals these transformations from assertive business professional to adoring little sister before she even opens her mouth. With absolute authenticity, Moeller plays Jamie’s often exasperated and impatient adult sister as well as an adoring child who’s eager to be regaled by her brother’s retelling of Greek myths.

Eva Nimmer and William Bolz also give excellent performances as an old Belgian woman named Mère, a French black-market dealer and numerous other characters each.

Moeller brings the familiar experience of a younger sibling to the role of Mattie. “Mattie so loves and looks up to her older brother, Jamie, in this play and wants to be just like him,” Moeller said. “I was the youngest of three, and definitely admired my older brother and sister in much the same way.”

One of the play’s strongest through lines comes from this kind of everyday familial experience. Playwright Marie Kohler, who was in residence at TAP during the show’s two-week rehearsal period, displays a knack for crystallizing the meaning in small moments. Each fleeting conversation or seemingly insignificant phrase takes the audience deeper into the psyche of the characters.

The audience watches young Jamie gradually unravel at the same time that present-day Jamie and Mattie struggle to communicate. In one particularly frenzied scene right before intermission, present-day Jamie, young Jamie and present-day Mattie churn around the stage together, voices raised, as they all try to make themselves understood. It is only later in the show, when the characters begin to listen, that the mystery can be solved.

Although one layer of The Dig explores common familial experiences, Jamie’s mental illness may not be an experience that every audience member will recognize. While writing The Dig, Kohler drew from her own experiences with a family member who struggled with mental illness.

Though the play depicts Jamie’s mental illness, it focuses more on the ways in which Mattie has been transformed by her brother’s past experience and current condition. She mourns the brother who flew away on a plane to an archaeological dig in Lebanon and didn’t return as the same person, while she also navigates her relationship with a transformed and foreign Jamie in her adult life.

“Schizophrenia affects people in their late teens and early twenties,” Kohler explained. “You already have that existing relationship with [the affected individual] when they change.”

Regarding her decision to frame a discussion about mental health within an archeological mystery, Kohler said, “I’ve layered the two subjects in a way that’s not literal in order to talk about the way that you dig to find an artifact, you also have to dig in your life to find out how your life has been affected by people.”

Although the scenes that display Jamie’s struggle with schizophrenia can be challenging, The Dig is a play that explores both shadows and light. Heavier scenes of anxiety and strife are punctuated by the levity of storytelling, laughter, love and awe.

References to Keats, Kipling and Greek mythology are also woven into the script. In one sparkling scene, present-day Jamie reads to Mattie from Kipling’s Just So Stories, reminding Mattie – and the audience – of the young Jamie who ran through the backyard laughing, carrying his little sister on his shoulders.

Directed by guest director Alexander Coddington, The Dig plays at TAP Wednesday through Saturday, 7:30 pm; and Sunday, 2 pm, through July 20 (with no performance on July 4). There will also be Tuesday performances July 2 and 16, 7:30 pm. Visit thirdavenueplayhouse.com for more information and to purchase tickets.