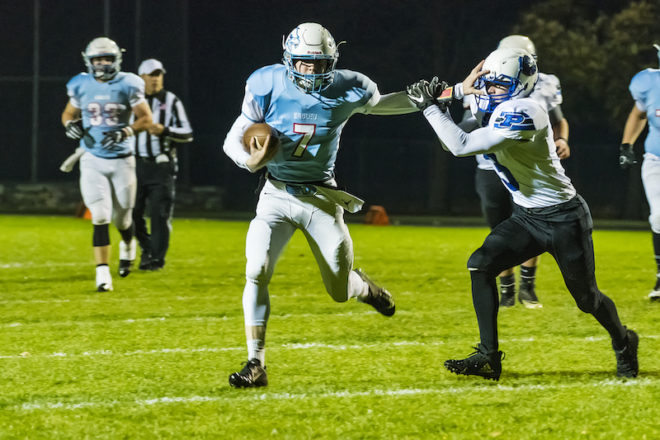 Nicole Norton had seen her spring 2020 softball season shelved and wasn’t looking forward to the depressing prospect of a possible sequel this fall.

So Norton was understandably thrilled to hear that her final year of volleyball for the Southern Door Eagles probably won’t be lost to the COVID-19 pandemic. Norton, a senior, is Southern Door’s most accomplished three-sport female athlete, and she hopes to continue playing sports collegiately – most likely volleyball, where it appears she will get a chance to produce some additional highlights and impressive tape for recruiters.

“I was pretty excited when they said they were going to play in the fall,” said Norton, who’s also a standout in basketball and softball. “Even now, it’s hard to explain how the summer was – just the uncertainty of [whether] you’ll ever get to play again in high school. For some of [my teammates], it’ll be the last time they play.”

Last week, the Packerland Conference – during a meeting of principals and athletic directors – voted to recommend to its nine member schools that fall prep sports take place within the normal late-summer/autumn window. For the sports that require more physical contact, practices and competition will be delayed until September.

“This wasn’t just based on a one-hour meeting,” Packerland Commissioner Mike Holtz said. “We have been meeting on this at least every other week during July and August – and now every week with things changing so rapidly.”

But there’s a kicker to the Packerland officials’ endorsement: No games, matches or meets may go forward in a county where the state rates the coronavirus risk level as high. The only acceptable risk categories will be low and moderate/medium – a status found nowhere within the league’s five-county reach as of Monday morning. The latest ratings from the state’s Department of Health Services shows 64 of Wisconsin’s 72 counties were deemed high risk, according to ratings that are updated every Wednesday.

“If  School A is high and School B is medium,” Holtz said, “they are going to have to reschedule. We have nothing scheduled conference-wise until Sept. 15 – about three weeks [away] – so we’re hoping those ratings get turned around.”

The Wisconsin Interscholastic Athletic Association (WIAA), the governing body for prep sports in Wisconsin, left the ultimate choice of whether to play up to the individual school districts. Locally, the Sevastopol School Board accepted the Packerland proposal during its regular meeting Aug. 20, Superintendent Kyle Luedtke said. School boards for Door County’s other three Packerland member districts – Gibraltar, Sturgeon Bay and Southern Door – were scheduled to make final decisions this week.

In Door County, the sports awaiting the green light are football, cross-country, volleyball, boys soccer, a countywide girls swimming co-op team led by Sturgeon Bay, and Clippers girls golf. The latter two squads compete in the Bay Conference because only two other Packerland schools sponsor golf, and none offer swimming.

Holtz said he wished leagues had been empowered to make an all-in or all-out decision to avoid a possible patchwork of outcomes among schools. But he said he still foresaw a unified approach locally because cooperation has been a hallmark of the league, and his member schools are “committed to working through this together.”

The league hasn’t decided whether a canceled dual-team event should be postponed, scratched or even forfeited if a high-risk county can’t host a team from outside the county lines. The rugged game of football can’t be played twice a week, Holtz noted, making new dates tougher to find within the fall calendar for that sport.

If a sport fails to finish half of its season, it can take advantage of the new “fall in spring” arrangement, but Holtz said he’d like to avoid that if possible.

“We’re made up of smaller schools, so we have a lot of three-sport athletes,” he said. “Even with the spring schedule changes, the [alternate] fall season overlaps a lot of the spring sports. How do you make a kid choose between football and track and field?”

At Southern Door, the district has already called off its own Eagle Invitational volleyball tournament and almost a dozen other large, nonconference, multi-team volleyball and cross-country meets, Athletic Director Korey Mallien said. Although the WIAA defines cross-country as a low-contact activity that has been allowed to start earlier than others, Mallien said it might present the most significant challenges in determining a conference champ.

“You can do staggered starts, but I still don’t think anyone feels comfortable bringing seven, eight, nine schools together in one setting [for the title-deciding conference meet],” Mallien said. “We’ll get that figured out.”

Whether fans and parents get to attend events – as usual, in limited numbers or not at all – remains an open question, Mallien said, but, fortuitously, Southern Door recently received grant money to install cameras at the football field and in the gym to record livestreams of events that fans can watch at home.

“Mike Holtz has done a really good job of revising schedules to make this work,” Mallien said. “He has put together both a conference-only schedule and another one that’s ready to go if we decide to do nonconference sports [at the tail end of the season].”

Todd Meikle, athletic director at Sturgeon Bay, might have the most complex puzzle to figure out because only two of his school’s five fall sports compete in the Packerland.

The girls golf and girls swimming teams belong to the Bay Conference – which is moving forward with fall sports – and the football team is in its second year as an independent, eight-player program. Sevastopol and Gibraltar also sponsor eight-player teams in a combined conference encompassing the Packerland, Marinette-Oconto and Northern Lakes leagues.

Sturgeon Bay was set to host a Bay Conference meet at Cherry Hills Golf and Lodge Monday but had to drop out because of Door County’s still-elevated disease threat level.

“The meet is going to take place [elsewhere], but we’re still going to have them go out to Cherry Hills and record their scores and ‘compete,’” Meikle said. “It won’t count, but for [the sake of] their competitive energy, we wanted to make it more than a practice and give them a ‘game-like’ atmosphere.”

The Pulse also tried to reach Gibraltar Athletic Director Peggy Tanck but could not get a comment before press time.

Meanwhile, Norton and her Southern Door volleyball teammates are doing their part to try to bring those infection numbers down, but she admits it’s strange doing informal summer workouts while wearing a face mask, cleaning spots on the floor where a player dove for the ball and sanitizing the ball itself if it’s shared on a pass. That’s on top of temperature checks upon arriving at the gym and the now-customary rituals of social distancing, hand sanitizing and hand washing.

“It’s mostly [spaced-out] individual drills we’re doing now,” she said. “But for me as a setter and being as vocal as I am on the court, I feel like I have to communicate. But with the mask [muffling my voice], all I get back is the other girls asking me, ‘What did you just say?’”

Despite the challenges that some of the safety rules have created, the alternative is worse.

“We’re hopeful our kids have learned how quickly something can be taken away from you,” Mallien said. “We lost that in the spring, so why would you not want to follow every [rule] to a T?”