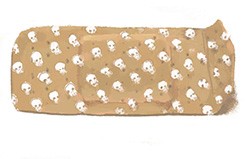 You know how it is, when science discovers something you knew all along. To know the Nobel Prize and a million bucks went to a scientist who wrote up the research about something you already knew, just hadn’t gotten around to getting it published in the Academy proceedings.

Jeffrey Mogil, a neuroscientist, has been studying pain for a number of years at McGill University in Montreal. One of the methods to test for pain is to inject an irritant into the feet of mice. His observation was that mice spent less time licking their feet, at the irritant, when a person is near. Including when that person is a cardboard cutout of Paris Hilton (I’m glad to know this still counts as science). Against this observation was another, that sometimes the animals showed less pain response than at other times. On a hunch the researcher noted whether it was a male or female researcher present.

It was soon apparent that rodents showed less sign of pain when male researchers were near versus female researchers. They tried this same experiment with t-shirts. Worn t-shirts. The presence of shirts worn by women smelling of men, 36 percent less evidence of pain. Maleness it seems, including odors of maleness, acts as a painkiller.

As farmkids we regularly did things that generally cause pain in normal right-thinking people. To work without respite, long hours, lift impossible weights, fit our hands into exceedingly small crevices with a 9/16-inch wrench with three degrees of arc travel, that when expressed in inches of thread is 10 minutes of your hand inside an impossibly small hole that rotates at right angles at the bottom. To most ordinary people this has all the markings of a leg-hold trap. It is my belief there are mechanical engineers who are born sinister in regards to repair, that these engineers are born at about the same ratio as mass murderers.

As a kid I was occasionally injured in the presence of my father, the sense was it didn’t hurt as much as when I got injured in the presence of my mom, who despite the crude rural setting was an actual female. In my dad’s presence I could pile a hundred and twenty bales on a flat rack hay wagon, then sit on top of that load like I was the lord of the fief. If my mom was driving the baler, I rode home on the tractor thinking it too dangerous to ride on top of that wagon load. Once the entire load tumbled into the creek when a timber broke and we were riding that load home.

Once there were scary rides at the Amherst Fair our dad would buy the tickets for. Our mom wouldn’t. Afraid we’d puke in public, and this a reflection on her parentage. Besides being a waste of an entire 20¢ carton of popcorn, besides that it spoils a person’s taste for popcorn for a while.

The pain threshold difference between male and female presence is thought to be a “primordial response” effecting human beings and other animals. Showing pain is a sign of weakness that, should this occur on the wrong end of town, could have implications on survival, this is the way it has been since the O.K. Corral.

The impact of this discovery for medical settings is whether it makes a difference if your therapist is male or female? In the rehab clinic, where we overcome the pain of injury or surgery, does it make a difference if the therapist is male or female? How does this affect the efficacy of drugs, and who is asking the patient that question of how they feel?

Does an accident victim at a crash site have a better chance of survival, of avoiding shock, if the first EMT they see is male?

In more routine stress situations, are there efficiencies and capacities affected or compromised by the sexual ratio of the participants? How does this affect the role of women in combat if it turns out that none of this response is intellectual but built into our biology?

There is a flipside to this. Does the male patient in the female presence have lower blood pressure, feel less aggressive, more at ease, less likely to mask pain?

All this I knew as a farmboy, when I noticed stuff didn’t start hurting till I got to the house.