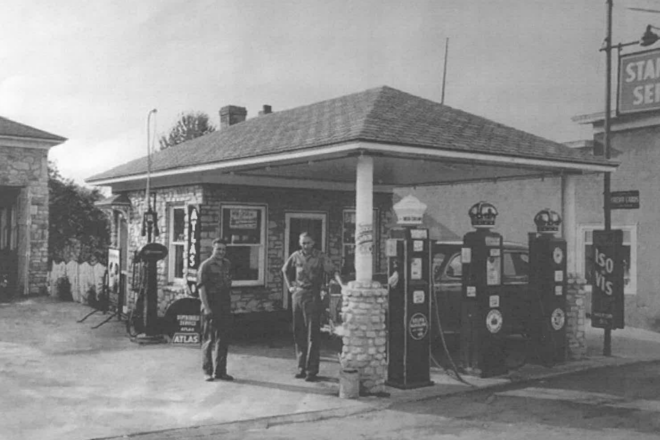 (From left) Clyde Casperson and Charlie Waller stand at the Standard Service gas station in Sister Bay that Casperson operated, circa 1940. The former Door County Ice Cream Factory location next to Husby’s Garage Bar will be retrofitted to look much as it did in its former life as a filling station. Photo courtesy of Greg Casperson.

Husby’s to bring historical look back to tiny bar

An old filling station will come back to life in Sister Bay this summer, but it won’t be pumping gas.

The owners of Husby’s presented concept plans for The Filling Station at Husby’s during the Feb. 25 Sister Bay Plan Commission meeting. An extension of the Garage Bar, it will be located in the tiny building next door that has been home to an ice cream shop for the last 25 years. The bar will feature slushy drinks.

“It might be the smallest bar in Wisconsin,” co-owner Chad Kodanko said.

Co-owner John Sawyer presented plans that will restore the building to the way it looked during its previous life as a Standard Service gas station, with an extended roofline and a single replica gas pump out front.

“We just want to bring it back and make it look like the old gas station,” Sawyer said.

The plan calls for adding glass garage doors to a covered, 14-foot-by-26-foot enclosed patio on the back of the building between the Garage Bar and Spot, to be used during inclement weather.

Plan Commission Chair Denise Bhirdo praised the historical look and likened it to what Mitch Larsen has done with his On Deck store up the street.

The commission will review final plans in March.