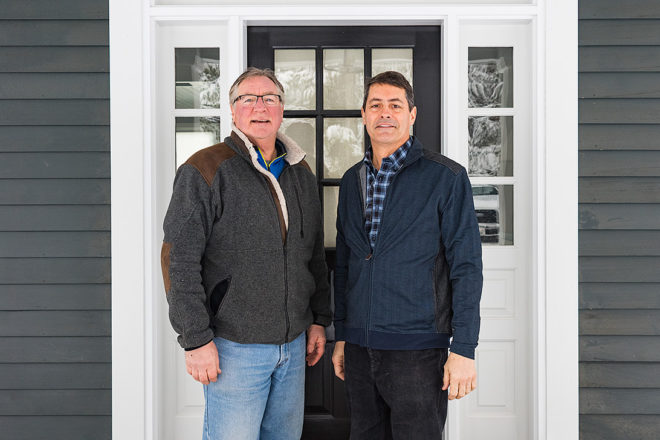 John Sawyer (left) and Craig Coursin take a look at a recently completed home in Ephraim. Sawyer ran Carlson Erickson Builders for 30 years before selling the company to Coursin in 2018. Photo by Len Villano.

The carpenter sees the peninsula’s landscape differently than the rest of us. The eyes of the average Joe are pulled to the water, to the bluffs, to the fields. The carpenter sees his or her hands on everything.

“You drive around. You think, ‘I built that house. I repaired that building.’ There’s satisfaction in what we did,” says Butch Hugenroth, who spent 40 years building homes for Carlson Erickson Builders.

“It’s incredible to go back and look at everything you did,” Johnson says with a touch of awe. “The front of the Wild Tomato – that’s some of the only stuff left in Sister Bay that’s still standing. The stone at Scandia Village. The Liberty Grove town shop.”

Along with the pride, there is sadness. “We rebuilt Hotel du Nord after the fire,” Hugenroth says, referring to the fire that destroyed the original Hotel du Nord in 1982. “Then they tear it down and put condos there. That’s one of the hardest things to see.”

But much more of the work of Carlson Erickson is still standing in Northern Door, nearly 51 years after Don Erickson and John Carlson started the company with a small team of carpenters and masons in 1969.

It was an opportune time to start a construction company. National Geographic magazine would publish a sprawling spread about the virtues of the county that year, helping to spark a boom in visitors, many of whom would seek to make the county their home, or at least their seasonal retreat.

“The way Door County is now, it wasn’t like that,” Hugenroth says. “You either worked at the shipyard, or you left Door County. All the baseball players left; the Door County Baseball League was really struggling. When I graduated in 1966, there was no work. I needed a job, so I went and met with Randy Nelson – not because I wanted to be a carpenter, but because it was all I had.”

In those days, each town had its own builders, Hugenroth recalls, all making a brand out of a family name.

“You had Alvin Hedeen and Carlson Erickson in Sister Bay,” he says. “Joe Parent and Pat Tishler in Baileys Harbor. Brungranbers in Jacksonport.”

“When I first started, most of the cabins were just old shacks – big, empty buildings and post-and-beam construction,” he says. His first job was putting in the new kitchen at the Sister Bay Bowl. “It was a small crew then. Small enough that we used to have the Christmas parties over at Don’s house – six or seven of us.”

Restaurant jobs were popular with the crews. At Hotel du Nord, Al Johnson’s and the Bowl, the owners insisted that you sit down to be fed during the lunch break.

Carlson Erickson earned a reputation for being good to its crews, offering health insurance, paid vacations and other small perks that were rare in the trades.

“We had the first good benefits,” Hugenroth says. “When I started, we worked 50 hours a week. Then one day Donnie [Erickson] came in and said, ‘We’re doing 45, but you’re still getting paid for 50.’”

Today’s homes are often built by a cadre of subcontractors. Excavators arrive to clear the land. Framers specialize in putting up walls; masons do their thing; drywallers do theirs. Carlson Erickson takes pride in claiming a crew of master carpenters: people who can do everything when it comes to building a home. In the early days, the company even had its own masons, such as Johnson, Jack Landstrom and Gene Anderson.

A home at Northport was built largely with trees harvested from the lot. “They took the logs over to Carl Carlson’s sawmill and brought them back to build a log cabin,” Hugenroth says.

The company earned a reputation for quality work with the early crew. Ron Mickelson, Conrad Johnson, Ron Daubner, Bob Lang and Paul Linden helped to establish that reputation. You still don’t have to sip more than a couple of tappers at Husby’s or the Mink River Basin to hear someone mention one of those names in admiration of their work.

After starting with the company as a mud-tender, John Sawyer eventually bought into the company in 1988. Carlson retired in 1990, and Erickson followed in 1995.

“We always said John liked us so much he bought us,” Johnson jokes.

Sawyer kept the company name and the lessons he learned from his bosses.

“Don and Carl taught me honesty and working with people to find what they wanted in a home,” Sawyer says.

In Sawyer’s 30 years at the helm, he took pride in never laying off an employee.

“I had great bosses,” Hugenroth says. “It’s pretty rare to go your entire career and have only two jobs, where you enjoy going to work every day.”

But during a half century, even a construction company with a good reputation will encounter rough times. After growing to 27 workers to build Scandia Village, which opened in 1981, work dried up. Erickson would sit in the office all day waiting for the phone to ring, and the crew shrank to just a handful.

“It was pretty scary in those days,” Hugenroth says.

But the economy would rebound, and by the 1980s, desires were changing. People wanted bigger homes to live in, and the summer cottage turned into the summer compound. Old cottages were being torn down to make way for homes to fit extended families.

Sawyer took over in the midst of a sea change in style on the peninsula.

“In the early years, the company built a lot of small cottages with electric heat, usually for summer-home purposes,” Sawyer says. “As time went on, tastes and needs evolved. By the 1990s, it was changing a lot. People wanted year-round homes they could visit anytime. And bigger homes.”

A 3,500-square-foot home became the norm. Families spread around the country didn’t want to get together back home in the city or the suburbs, but in Door County.

In January of 2018, after 30 years at the helm, Sawyer sold the company to Craig Coursin, a Waukesha architect whom Sawyer had known for 25 years. Though Coursin was 60, he had no intention of slowing down or retiring.

“I ran a design-build firm in Waukesha, but my goal was to get to Door County,” Coursin says. For 11 years, he had had a cottage in Door County and was looking for the right opportunity to move. Carlson Erickson had all the pieces and people he was looking for. Sawyer was ready to retire but willing to stay on for several years to transition the company and ongoing projects, including the high-profile Northern Sky Theater Creative Campus.

“You don’t build a project that large without a pucker factor,” Coursin says. “The architects did a really nice design, but it’s a challenge because we don’t have a lot of super-large contractors up here. We had multiple guys we had to pull from the Fox Valley.”

The $7.8 million project was completed in the summer of 2019. Although the core of Carlson Erickson is still single-family homes, another high-profile project is in the offing this year: The company is shooting for a late-spring completion of the new writing center for Write On, Door County in Juddville.

“My goal is not to grow C&E into a big company,” Coursin says. “The goal is to be a good, strong company. When you’re the new guy, the last thing you want to do is major change. I want to be a good steward of what has been built here.”

The core of the business remains custom homes. Some stand on the shore, some on the county’s back roads, but they’re all built by people who are proud to point them out and tell you, “I built that.”