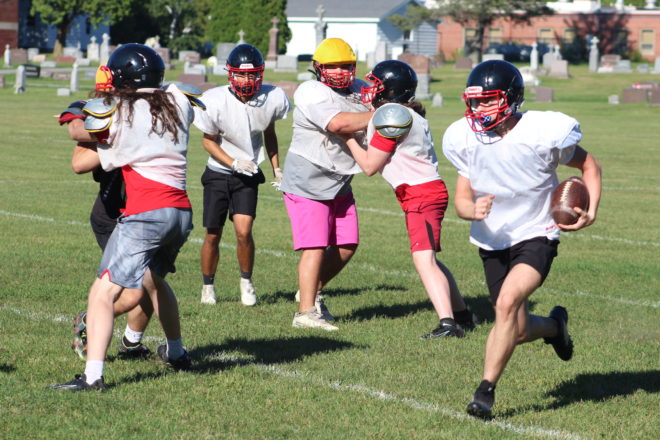 (At right) Sevastopol’s Waylon Bittorf runs with the football while getting blocking protection during the team’s Aug. 11 practice. Photo by Kevin Boneske.

After winning only two conference games last season, Sevastopol’s eight-player football program is looking to improve in 2022 with 11 seniors on the team.

Head coach Ron Frank said nearly half of the 34-player varsity roster consists of juniors or seniors. That big turnout means Sevastopol will also be able to field a junior-varsity team this season, with 18 players who are freshmen or sophomores playing a six-game schedule.

The Pioneers’ eight-game varsity schedule features the same opponent – Gibraltar – for the first and last games, with the season opener Aug. 26 in Fish Creek being a nonconference contest and the Oct. 14 finale in Institute counting in the newly formed Peninsula Conference for eight-player football.

Frank said he expects Lena/St. Thomas Aquinas will be the favorite team in the conference, where he hopes Sevastopol will be able to finish in the middle to upper portion of the standings and also qualify for the postseason.

Frank said the team will use an I-formation on offense, which will be varied on plays opening up the offense, and have three out of the eight defensive players set up along the line of scrimmage.

Compared to 11-player football, the eight-player variety on offense eliminates the two tackle positions and also has one fewer player behind the line of scrimmage.

Logan Retzlaff, a senior cornerback/receiver/tight end who’s also a kicker on the team, said he’s excited about being able to play Gibraltar twice this season.

“We lost a hard one to Gibraltar last year, so I’m hoping this year we can put them back in their place and beat them – maybe once, maybe twice,” he said.

Mason Bosman, a senior guard, said he believes this year’s team has skilled, young players and a lot of potential.

“I’m hoping for a good outlook for this year,” he said. “Yeah, we’ve got a big senior class, and we’ve got a lot of kids coming in. It’s one of the biggest teams we’ve had for a long time, and I think that will give us some opportunity to grow.”

“I think we’re going to be able to do pretty good in the regular season,” he said. “We’re going to have some challenging games, but it’s all about the effort – the work we put in now.”

All games start at 7 pm.

Aug. 26 Away vs. Gibraltar (Nonconference)

Sept. 1 Away vs. Gillett

Sept. 16 Away vs. Oneida Nation/NEW Lutheran

Sept. 23 Away vs. Wausaukee