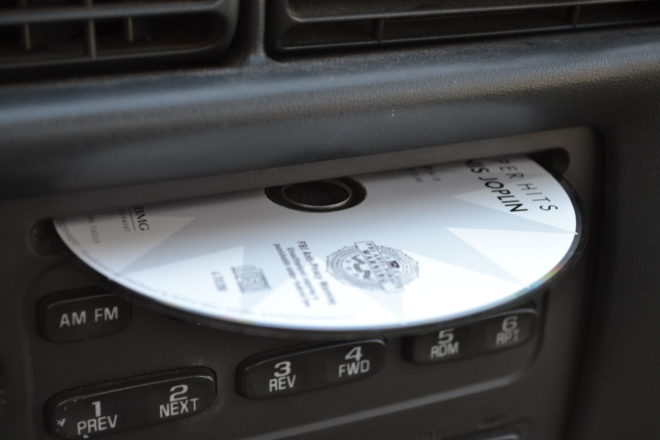 Ford recently announced that they would be replacing CD players with streaming music in their 2018 models. A spokesman for the company told NPR that with CD sales falling and streaming being the primary source of music consumption, the automobile giant is just trying to stay ahead of the curve.

Unfortunately NPR did not ask what would happen to the next generation of teen drivers that would never have the pleasure of permanently sealing the soundtrack to their high school careers onto an 80-minute compact disc.

Ours was cleverly called Ultimate CD and it sat secure in my friend Spencer’s Honda Civic, complete with cracked windshield and a trunk full of bottle rockets with safety goggles that we stole from the high school chemistry room.

It opened fast with Vampire Weekend’s “A-Punk” and waltzed between “Police Truck” by the Dead Kennedys, “Take It Off” by The Donnas and “Girl” by Beck. Pete’s favorite was KT Tunstall’s “Suddenly I See” and after listening to it repeatedly driving around suburban Chicago with no agenda, I’ll admit to liking it too.

There was a certain magic to creating a mix on a CD. There was a group of songs that just gelled together, no matter how different their genres were, and a correct ordering of those songs that made sense to nobody but your group of friends. I didn’t have the magic, but my friends did.

Even today, Matt Costa’s “Behind the Moon” and “Kids With Guns” by the Gorillaz incites a very specific nostalgia not just of time spent with friends, but of a creative kind of high school debauchery that only comes when a few 15-year-olds just got a drivers license.

The death of the CD player is just another notch on the belt of outdated musical equipment in cars. Some of you may still have a cassette player in your dash, but I doubt you can reach down and pull out a vinyl record player, as was possible with the “Highway Hi-Fi” first introduced on some Chrysler 1956 models (and only lasted two years).

The eight-track had a bit more hold in the world of automobiles, but it was quickly ousted by the cassette players. FM radio beat AM radio around the 1970s due to the better sound quality, but now carmakers are considering outlawing both broadcast radio technologies in favor of satellite signals.

I guess this is just the death of low-tech and birth of high-tech taking true form for the first time in my life. Spencer doesn’t have his Honda Civic anymore and with it, we lost the Ultimate CD. When I reached out to him to ask what songs were on that CD, he sent me an Apple Music playlist, which I quickly downloaded over Wi-Fi and played in my car.