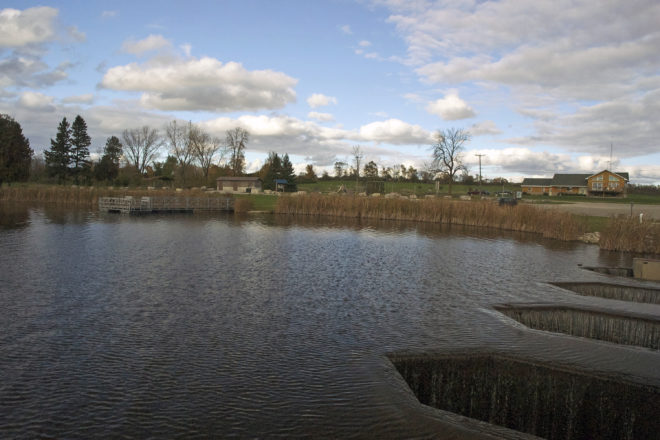 The Forestville Millpond with the dam spillways to the right. Photo by Jim Lundstrom.

The one thing made abundantly clear at the special Nov. 9 meeting of the Door County Airport & Parks Committee is that the manmade Forestville Millpond is considered a community gem.

About 60 people packed into the Forestville Town Hall to hear a presentation from Greg Coulthurst of Door County’s Soil and Water Conservation Dept. and Erik Aleson, head of the county Parks Dept., on the history of the millpond and options for its future.

The options, first outlined in a June 6, 1996, report (map.co.door.wi.us/parks/Forestville%20Millpond%20Report%201996.pdf), range from doing nothing to dredging sediments to a yearlong drawdown to allow the problematic sediments to compact.

After the presentation, the audience was asked to give their thoughts. They were not asked to identify themselves before they spoke, so names of the speakers are not available.

One former employee of the county highway department said back in 1981, the year before the present dam was installed, county equipment was used to dredge out some sediment. “Can’t see why the county can’t do the same thing,” he said.

Another man said no one wants the draining option because it takes the millpond out of commission for at least a year.

“There are so many variables and options, we really want to know what you guys want,” Coulthurst said.

“My boys really want to fish,” a man called out.

Another man, who said he grew up on the millpond and swam in it up until 1982 when the new dam was installed, said the new dam created an undertow. He added that perhaps changing the way the dam works would help improve the water quality.

Another man said the summer of 2016 was the worst ever for algae on the millpond. “Don’t let a property like this go downhill,” he said. “It would behoove everybody for the county to be involved in this big time.” 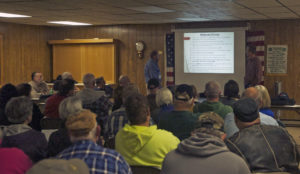 Greg Coulthurst and Erik Aleson talk about the history of the Forestville Millpond at a special meeting of the Door County Airport & Parks Committee at the Forestville Town Hall on Nov. 9. Photo by Jim Lundstrom.

Gary Nault, who is involved in the rehabilitation of Little Lake in Sturgeon Bay, told the group that there are restoration grants available to lake management groups, and he suggested Forestville residents form such a group. “You have a sportsman’s paradise sitting in Forestville,” he said. “It’s a jewel. You have to take care of it.”

There seemed to be interest in the audience to create a lake management group.

Another man said when you walk along the water in the spring, “It’s full of carp and they’re stirring up the bottom. Besides the algae, the carp are making the water quality or clarity terrible.”

Coulthurst referred to a pilot dredging project that was undertaken at Dunes Lake earlier this year, where two acres of that mucky lake were dredged, changing the depth from about one foot to four or five feet at a cost of about $300,000. Now, he said, they have a pretty good idea of what it will cost to do the rest of the lake, which gives confidence in costing when seeking grants. But he also pointed out that sources of pollution have to be addressed before getting any dredging grants.

“What’s the timeline?” a man asked. “A year, five years, sweep it under the rug and wait another 20 years?”

Committee Chair Dan Austad said there is one driver to the project: money. How much money depends on what the residents want to do, he said.

“What is your goal?” an audience member said.

“To make you people happy,” Austad said, to which an audience member pointed out that it is not just locals who use the millpond. “There are boats on there every day,” the man said. “People from all over use that. All fall people have been duck hunting, fishing, kayaking, canoeing. Everything is going on there, but it is not just this group of people. It’s lots of people.”

“All you have to do is let the water run out the bottom,” said another man. “If they wouldn’t have put the dam in that way, we wouldn’t have that.”

That man’s comment was dealt with in the 1996 report when the community overwhelmingly opted for redesigning the dam the way it was before the new dam was installed in 1982. The old dam had gates at the bottom that could be removed to deal with sediment build-up near the dam. However, that solution would do nothing for the rest of the body of water.

A woman in the audience said that all these options are based on a study that’s 20 years-old, so wouldn’t it be prudent to do a new study for today’s conditions?

“What we want is clean water and we can’t do anything until we do the study,” she said.

“We’re here to find out if you want something done,” Austad said.

“Of course we do,” the audience seemed to say in unison.

An audience member suggested the county commission a study of the millpond and then reconvene the community to discuss where to go. “There’s no sense to go on like this,” he said.

The committee agreed and said they would take the issue up at the next meeting in December. Ken Fisher, who serves on the Airport & Parks committee and chairs the Soil and Water Committee, said his committee would also weigh in on the issue of what to do about the Forestville Millpond.