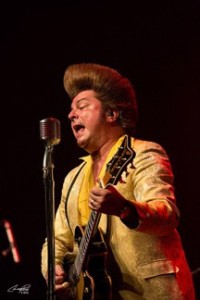 • Cadillac Casanovas bring rockabilly ‘50s tunes to the patio at Stone Harbor in Sturgeon Bay from 4 – 8 pm, and seriously, you’ve got to see the lead singer’s hairdo!

The band pulls out all of the classic tunes from the decade that dominated juke boxes while still leaving room for some of the great deep cuts that are rarely heard. Armed with a nostalgic list of songs from some of the most well-known pioneers of the 1950s such as Chuck Berry, Johnny Cash, Elvis, Buddy Holly, Carl Perkins, and Ricky Nelson, punctuated with unusual historical trivia, the Cadillac Casanovas will captivate any crowd for hours on end. (And they have a sweet rendition of the National Anthem.)

• Drawing inspiration from many types of Americana, roots music like Zydeco, blues, jazz, rock, polka and Tejano, Copper Box’s sound is a distinctive musical melting pot that is easy on the ears and good for the soul. They perform at Woodwalk Gallery in Egg Harbor at 6:30 pm (a holiday celebration and picnic begins at 5 pm).

Danny Jerabek performs on button box, cornet, keys, penny whistles, and vocals along with his wife Michelle Jerabek, who performs on saxophone, guitar, flute, washboard, and vocals. Fellow musicians Kevin Junemann, on bass and ukulele, and Jason Van Ryzin, on drums and percussion, round out the group.

• The Dave Steffen Band will get you dancing with their guitar blues rock at The Carlsville Roadhouse in Carlsville at 8 pm.

Since Dave received his first recording contract at the tender age of fifteen, he has devoted his life to playing, recording and living his music – the band follows suit and has a huge following among the daytime soap opera crowd (fun fact!).

• Local band The Offseason grew up listening to the Grateful Dead, a few years ago they realized national touring act Todd Carey had the same experience. A New Year’s Eve tradition of covering all Grateful Dead songs soon began and the group morphed into the Heart of Gold Band.

“It has been a great tradition that we all look forward to each year. But with the closing of The Hitching Post, one of our favorite places to play, we needed to find another venue for said tradition,” said Elliot Goettelman of The Offseason.

This year they are “spreading the Dead” with Husby’s in Sister Bay, starting off with a solo acoustic set by Todd Carey in The Garage from 7 – 10 pm, followed by a performance by the Heart of Gold Band inside Husby’s from 10:30 pm – close.