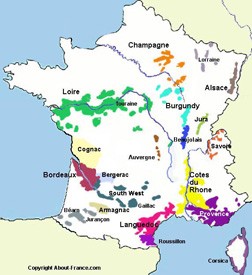 This week we will look at the renowned wine regions of France! While there are more than these, we are going to focus on the main six regions: Bordeaux, Loire Valley, Champagne, Alsace, Burgundy and Rhone.

Located along the Atlantic coast in the southeast of France, the city of Bordeaux lies at the estuary where the Garonne and Dordogne rivers flow into the Gironde River that leads out to the Atlantic Ocean. The area boasts more than 7,000 chateaux, with short winters and hot summers that have a high humidity from the proximity to the ocean.

The main varietals produced in the region include the noble reds of Merlot, Cabernet Sauvignon, Cabernet Franc, Malbec and Petit Verdot as well as the white grapes of Sauvignon Blanc, Semillon and Muscadelle.

In the west center of France lies the Loire River Valley. A wide and deep river with undulating landscape, the central Massif Mountains feed the river down and out into the Atlantic Ocean.

The upper Loire is known to produce Sauvignon Blanc in the regions of Sancerre and Pouilly-Fumé. The central Loire produces Chenin Blanc and Cabernet Franc from Touraine, Saumur, Chinon and Vouvray. The lower Loire is known for the grape Melon de Bourgougne in the Muscadet region.

The northern-most wine region of France is located just east of Paris. Champagne is worldly known to produce well sought after sparkling wines made from Chardonnay, Pinot Noir and Pinot Meunier grapes. Located along the 49th parallel, the cool temperatures tend to produce high levels of acidity in the grapes, which is ideal for sparkling wines.

Located in the northeast part of France, between the Vosges Mountains and the Rhine River, is the region of Alsace. It is known primarily for white wines such at Riesling, Gewürztraminer, Pinot Gris, Auxerrois Blanc, Pinot Blanc and Sylvaner, with a little bit of Pinot Noir also grown in the region.

South of Paris, the Saône River flows south into the Rhône River. Here lies the region of Burgundy, well known for Pinot Noir and Chardonnay in the northern areas of Côte de Nuits, Côte de Beaune and Chablis. Toward the south, the regions of Beaujolais and Mâconnais tend to produce easy drinking, more affordable wines.

South of Burgundy and still along the Rhône River is the Rhône Region. With a Mediterranean climate, this region boasts a wide array of varietals. In northern Rhône, Syrah dominates and is blended with other varietals such as Marsanne, Roussanne and Viognier. In the south, where Châtenuef-du-Pape comes from, there is a multitude of blending varietals. There are up to 19 grapes allowed into Châtenuef-du-Pape, including 10 reds and nine whites. The Gigondas region uses primarily the Grenache Noir grape as well as blends of Grenache, Syrah, Mourvèdre, Carignan and Cinsault.

Karl Bradley is the wine sales representative for General Beverage Wines for the Door County area. He has worked in fine dining and wine sales for more than 25 years and has a sommelier certificate from the Court of the Master Sommeliers.