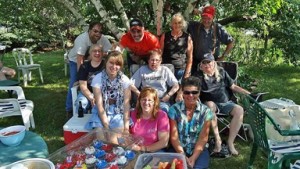 Joan’s sister Julie submitted the photos of Joan with her children, her partner Randy, and one taken this past summer at a family gathering, and said, “All the surgeries, chemotherapy, radiation and the drugs she had to take to fight the cancer changed her outward appearance but never changed the essence of this courageous woman on the inside. I learned more from Joan about determination and courage and inner strength in the past few years than I had learned in the entirety of my life until then. I will miss her daily presence for the rest of my life.” Submitted photos.

Friends and family are gathering Saturday, Nov. 9, to remember and celebrate the life of Joan Lautenbach Doubek. Pneumonia took Joan on Sept. 6. She was 46 and the mother of two, Abby, 18, a 2013 graduate of Sturgeon Bay High School who now attends Northeast Wisconsin Technical School, and Megan, 23, a veterinary technician student at Globe University, Green Bay.

The cause of Joan’s death, says her sister Julie Ploor, reflects on her strength of character, and how, in her own way, she beat cancer.

“Even when she lost the ability to walk because the cancer had eaten away at the hipbone, she wasn’t a candidate really for anything. She decided to go on another experimental chemo treatment,” Julie explained. “Two days before [the treatment was to start] she got pneumonia. Pneumonia’s really what got her. She didn’t let cancer win. She wasn’t going out that way.”

The benefit at the Draft Haus in Sturgeon Bay runs from 4 to 10 pm and coincides with Lung Cancer Awareness Month, which is where Joan’s 3 1/2-year struggle with cancer began. Read more about the benefit here>>

It began in early 2010 when Joan, a secretary in the Radiology Department at Ministry Door County Medical Center, was experiencing back pain, so went in for a routine checkup.

“I remember this very distinctly, she told the doctor she wanted a chest X-ray done, too. I think she suspected something, that this back pain was something else,” said Joan’s partner of 10 years Randy Brusewitz (as a musician he’s known as Randy Bruce). “She had been a long-term smoker. She quit five, six years ago on her own in a very short period of time.”

The doctor did a chest X-ray and a spot was found on Joan’s left lung.

“By April she was in the hospital having the upper lobe of her left lung removed,” Randy said. “She recovered quickly and was back to work in five weeks. She was not going to let anything stop her from what she wanted and needed to do. It was her goal to go back to work, to be productive, to do something worthwhile.”

That summer Joan completed a round of chemotherapy that went into the fall.

“She was going to do whatever it took to prolong her life and have as good a life as she could have, especially for her two daughters,” Randy said. “She weathered the chemotherapy. 2011 went by, things were good.”

In April 2012, Randy was in Nashville recording an album. Upon his return, he and Joan were planning to celebrate her two years of good health.

“It was about a week after I got back from Nashville that she went in for a routine physical and they found that she had a spot on her other lung,” he said.

The prescribed treatment was more chemotherapy.

Then their summer was filled with radiation, chemotherapy and steroids.

“All of a sudden we were in a lot of regimens that are not much fun. But she was still going to work almost every day. She would take off the days after chemo, but she was still doing well. Her outlook was still cheery after two and half years,” Randy said.

But he noticed that Joan was growing increasingly unsteady on her feet.

“Very shortly after the beginning of 2013, she went in for a check-up. I knew something was wrong,” Randy said. “Found out she had a brain tumor. Couple weeks later, the middle of January, she’s having ‘Festus’ removed, as she liked to call her tumor. She named it. She had Festus removed. That all went well.”

After the 90-minute surgery, the surgeon told Randy that they had removed all they could with the surgery, but it was metastasized from the lung.

On Valentine’s Day, Joan took a turn for the worse. Randy brought her to the emergency room.

“They found out she had blood clots. They rushed her off to Green Bay and she spent a week in the hospital, fighting the blood clots, getting her blood thinned,” he said.

In March radiation surgery was used to remove whatever was left of the brain tumor after the January surgery.

“She did well through that,” Randy said. “She’s still going back to work whenever she can. In the end of May, I had to take Joan into the hospital. She wasn’t doing well at all. She was bleeding in the head. They took her again to St. Vincent’s in Green Bay. She spent two weeks this time. They had to do the opposite of what they were doing in February, they had to thicken her blood up with plasma.”

It was during that two-week stay in the Green Bay hospital that Abby graduated from high school.

“They Skyped it, but as Abby was going across the stage, the Skype went out, but a lot of people videotaped it. It was sad that she missed that,” Randy said.

He mentions a story that shows the person Joan was. Upon her release from the hospital in mid-June, the family goes out for a graduation dinner.

“By this time Joan is using a walker,” Randy said. “The disheartening thing was the people looking at her. She lost a lot of her hair and she’s getting around with a walker. This is a woman only 46 years old. It’s one thing for kids to gawk, but for adults to be gawking. But we get home from that and she says, ‘I think I did pretty good, my first time with a walker!’ That was just her, that was the way she dealt with everything. That was just Joan.”

As the summer and her radiation treatment progressed, Joan’s esophagus deteriorated due to the radiation and she had to go on a feeding tube.

“Early August she was in a lot of pain,” Randy said. “I took her  into the hospital. We had the X-rays and scans done and we found out the reason why her right leg felt dead – she had to pull it along – there was basically nothing left of her right hip. The cancer had eaten it away. Now she is no longer able to use the walker. We spent two weeks on the wing, and then it was time to move her into the nursing home part. We were two weeks in there and she got the pneumonia that took her life.”

At her funeral, Randy said he wasn’t sure he would be able to get up and talk, but then he thought of Joan’s strength.

“You showed me how to be strong, and I’m going to have to be as strong as you are,” he said. “That’s the effect people have on our lives. After they are gone, you see the strength and great character they exhibited. It was commonplace for her. It was how she lived her life every day. Joan was a very stoic person and a lot of that is in her kids. When she originally told them of the cancer 3 1/2 years ago, she said, don’t do anything differently. Don’t feel sorry for me. Life goes on.”