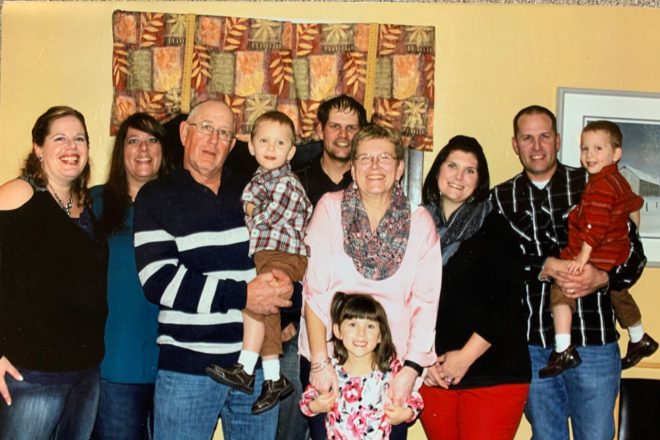 For nearly all of Dan Krowas’ 66 years, September and October have meant one thing: harvest season. His father, Charles, planted the family’s first cherry trees on their property in Baileys Harbor in 1956, when Dan was just two years old, and Dan grew up learning the responsibilities of the orchard before taking it over with his wife, Cherie, in 1976.

Dan works for Therma-Tron-X for most of the year, and his bosses have always been flexible enough to allow him to work part time around his orchard schedule.

But this year Dan and Cherie had to sit out the fall harvest season for the first time. Early last spring, Dan’s doctor, Joseph Rebhan, noticed during a routine physical that Dan’s white blood cell count was low. When it didn’t improve during several weeks of monitoring, he referred him to a hematologist, who confirmed that Dan had a form of cancer known as myelodysplastic syndromes, or MDS: a group of diverse bone marrow disorders in which the bone marrow does not produce enough healthy blood cells.

According to the MDS Foundation, the disease affects between 12,000 and 20,000 Americans every year, most of whom are older than 65. Dan would need a bone marrow transplant, but first, he would undergo four rounds of chemotherapy, then build his strength for the transplant.

But there have been bumps in the road. A bout of pneumonia in late August put Dan in the hospital for two weeks – a stay made more stressful because COVID-19 restrictions meant Cherie couldn’t visit him. When he got out, Dan and Cherie had to take even stricter precautions to protect his health: isolating at home and seeing their kids only through the window as cases of COVID-19 spike in Door County.

Dan now has one more hurdle to clear before he can get a transplant. He’ll have triple-bypass surgery next month to repair damage from a mild heart attack that doctors suspect he suffered during his fight with pneumonia. It’s hoped that heart surgery will make him strong enough for the transplant. The good news is that if he gets the transplant, his prognosis for a full recovery is very good.

“It’s scary, but you go through what you’ve got to go through,” Dan said matter-of-factly.

So on days when he would normally be rising early to get ready for a long day of picking, sorting and preparing the farm stand, Dan has instead been staying inside with Cherie, conserving his strength for the next round in his fight.

“It’s not easy to sit at home and know those things are going on without you,” he said. “But to have family here helping out is rewarding. We always brought up our kids to share responsibilities, and now they’re doing a wonderful job.”

Son Andy gets up early to set up ladders and crates for people to pick apples before heading to work at Parent Construction. Their three other children – Erich, Hillary and Kirsten – come up on weekends to pick apples and work the farm stand. And friends have pitched in to pick fruit, cut trees and maintain the orchard.

“You don’t realize what family will do for you, or how many friends you really have, until you get into something like this,” Dan said. “They’ve taken the bull by the horns.”

Erich said weekend apple sales have been “unbelievable” because people have made a point to swing by to support the family.

This Saturday they’ll do even more. Friends have come together to organize a drive-through fundraising event Oct. 31 to help offset the costs of travel, lodging and missed work for the Krowas family.

“Dan and Cherie have been so giving all their lives,” said Denise Plassmeyer, who has taken the lead on the event. “We wanted to figure out what we could do to help them with expenses.”

Plassmeyer described the couple, whom she met when she moved to Door County from Missouri 28 years ago, as “down-to-earth, commonsense people. They’ve stayed really positive through all of this and relied on their family and faith.”