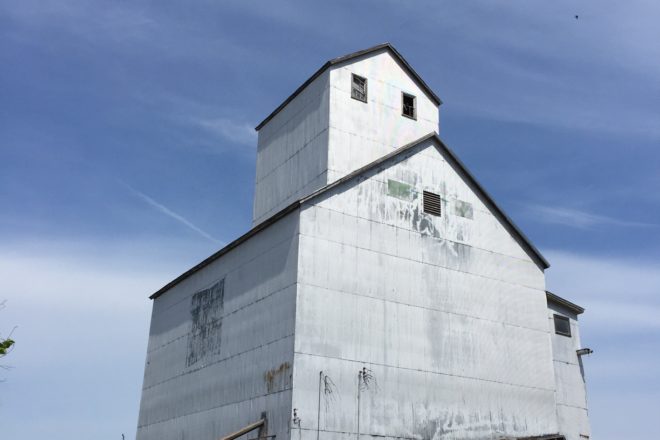 Sturgeon Bay’s historic granary building, an icon on the west side waterfront for 116 years, will be evaluated for demolition or rehabilitation.

The Sturgeon Bay Common Council voted unanimously June 6 to seek estimates for all options for the granary, including the cost to stabilize the building and clean it out, cost to tear it down and remove it, and the cost to renovate the structure for alternative use. The action came after Sturgeon Bay Fire Chief Timothy Dietman issued a Notice of Emergency Action May 26 for the granary, located at 92 E. Maple St.

Dietman said he received an anonymous call Friday, May 19, complaining of noxious odors coming from the building.

“We dispatched our units, and from 20 to 30 feet away you could smell it,” Dietman said. The chief also appeared to address rumors that the action to condemn the building was spurred by city council members who would like to see it torn down to make way for development.

“Nobody else in this room had anything to do with this prior to me submitting this notice to the city,” Dietman said.

Several citizens testified in favor of saving the structure. Christie Weber said a donor had already come forward to pledge $5,000 toward cleanup costs for the building. Prior estimates received by the city put the cost of cleanup at less than $10,000.

Door County Sanitarian John Teichtler also inspected the property with the fire chief and supported his assessment. A mesh fence was installed around the building last week.

“I would be in favor of getting it cleaned out,” said Alderwoman Laurel Hauser. “The granary remains a key parcel in all of the discussion about what’s going to happen on the west waterfront.”

“There have been far worse granaries in worse conditions than ours that have been restored and used as hubs,” Catarozoli said. “All we have to do now is clean this out. It is our building, and it is our responsibility to clean this out.”

Alderman Stewart Fett said he felt it may be time to give up on prospects of rehabilitating the structure.

“All of us have things in life that we become emotionally attached to,” Fett said. “We have two engineering studies that show that this piece of property is compromised.”

Ron Vandertie said he has heard far more people telling him to tear it down than to keep it up. Alderman David Ward recognized the challenges in restoring the building, but pointed out that the structure has been a key component of the west waterfront redevelopment plan since the city created a Tax Increment Finance District for the west side in 2014.

Mayor Thad Birmingham was pessimistic about the future of the structure, and dismissed previous estimates of costs for rehabilitation that put the cost to stabilize the building against wind sheer at $70,000. He said when private developers looked into renovating the structure, they determined they would need $1.2 million in developer assistance.

“We were grossly upside down for what we could get in [tax] increment,” he said. “That was a big disappointment.”

Richard Wiesner shared his pessimism and favored taking the structure down.

City Administrator Josh Van Lieshout said he expected it would take up to 60 days to get estimates back for all options for the granary.

Hauser said there are many people who have expressed willingness to donate funds to restore the structure but that fundraising efforts can’t proceed until there is clear direction on what will happen with the west waterfront redevelopment.

“With most historic structures, most people don’t see the value in it until it’s cleaned up and preserved,” Hauser said.

The granary has been nominated for listing with the National Register of Historic Places. According to Weber, the nomination is presently under review. It ceased to be used until the 1960s by the Door County Co-op. It is now owned by the city and was a centerpiece of the original West Waterfront Redevelopment Plan originally proposed in 2011.

Before voting, Catarozoli asked Birmingham to assure her that no action would be taken on demolition without clear approval from the council, and Birmingham agreed.