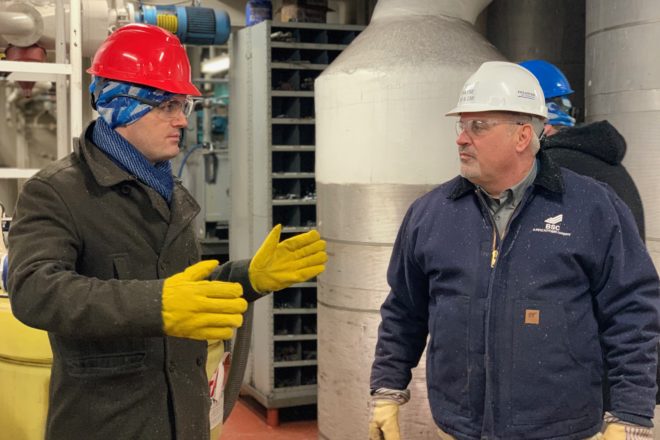 Rep. Mike Gallagher (left) gets a tour of the American Integrity and the Fincantieri Bay Shipbuilding shipyard with Todd Thayse, Bay Shipbuilding’s vice president and general manager, on Feb. 15. Photo by Len Villano.

Gallagher said the act would “clearly define the U.S. Coast Guard’s responsibilities for icebreaking on the Great Lakes to meet the reasonable demands of commerce.”

“Basically it’s intended to emphasize the importance of icebreaking to the future of commercial shipbuilding and all of our economy in the Great Lakes region,” Gallagher said. “This is intimately tied to the health of our economy.”

Gallagher said the Great Lakes region lost more than $1 billion in commerce last year because of insufficient icebreaking capability. Although the act doesn’t call for the funding of a second Great Lakes icebreaker, Gallagher said he hopes the provisions in the bill would lay the groundwork for funding a new icebreaker.

President Trump recently released his proposed budget for 2021 and did not include funding for a new icebreaker.

“Inadequate icebreaking capacity in the Great Lakes is costing us thousands of American jobs and millions in business revenue,” Baldwin said. “By refusing to fund another Great Lakes icebreaker, President Trump’s short-sighted budget proposal will hurt businesses that need to move their goods to market.”

The bill goes to the House Transportation and Infrastructure Committee. Gallagher said he hopes to get it passed this year.