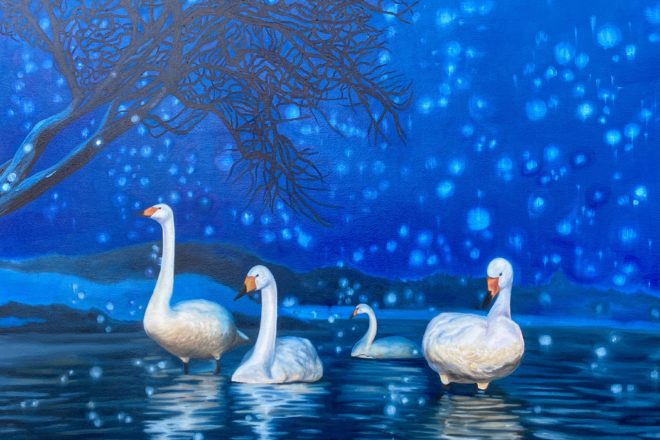 James May Gallery in Algoma has closed its doors, but it hasn’t disappeared. It’s merely gone virtual through the online art platform Artsy and through its own website.

Kendra Bulgrin and her husband, Jimmy Eddings, opened the gallery in 2015 and then expanded it in 2019 to a second building, James May North at 219 State St. That building has been sold, and the original building on Steele Street is listed for sale now that the couple and their family have moved to the Kettle Moraine area west of Milwaukee. One of their sons has severe health problems that require being close to a hospital there.

James May Gallery – named for the couple’s two sons – showed contemporary art from regional and national artists and tended to attract visitors from Green Bay, the Fox Valley and the Milwaukee area. Occasionally, some artists and buyers from Door County ventured south, too, Bulgrin said. That clientele has now expanded into national and international arenas, with sales increasing accordingly since the gallery has gone virtual, she added.

“It has been neat because we have been connecting with clients from the UK and on the coasts – people we normally wouldn’t have connected with,” Bulgrin said. “We have a pretty good national reputation, good recognition throughout the country from being professors and teaching at different schools, and word-of-mouth from artists who have shown with us.”

Artsy is an amazing platform, she said, but pricey, at $5,000 for the basic tier.

“It’s a pretty hefty price, but you are getting eyes on it from all over the world, so it’s neat,” she said. “We still have our Algoma and Door County audience, but we are also able to broaden the scope, and it’s a neat way for me to keep this going while working from home and being with the kids.”

That said, Bulgrin does miss the personal interaction of a physical gallery.

“Selling online is okay – not the greatest thing,” she said. “I would way rather be making connections in person.”

James May Gallery will still do thematic shows online about every three months, and its 2021 exhibition schedule is largely settled. It represents about 25 painters, but it stopped offering jewelry and ceramics because so much is available online.

Although Bulgrin and Eddings have thought about opening a physical space, the risk seemed high during the pandemic. Among their options for an eventual physical space are opening a gallery in Milwaukee or in one of the smaller towns surrounding their new residence; or building a gallery space on their own property after both of the Algoma properties have been sold.

Whatever they choose, they said two things are certain: It will be smaller and focused on painting.

In addition to running a global gallery from her computer, Bulgrin continues to do her own painting. She had two solo shows during the last couple of months and a residency in northwest Wisconsin. From one of the solo shows, she received a mural commission that she’s working on now.

Bulgrin said their gallery strives to achieve social and political awareness and tries to represent women and minority artists, “but I realize we could be doing better.”

Her struggle – as both a painter and a gallery owner – is art’s role in the world, and whether it can make a difference by showing us the power of humanity. It’s a struggle that many share.

“It can be paralyzing to get into your studio with all the heaviness of the world, thinking, ‘Does what I am doing make a difference?’” she said.

She may not answer a spoken yes to that question, but it’s present every day in what she does.

“We are so divided,” Bulgrin said. “If we could come together over something beautiful and create a greater feeling of empathy and curiosity, that is a great thing.”