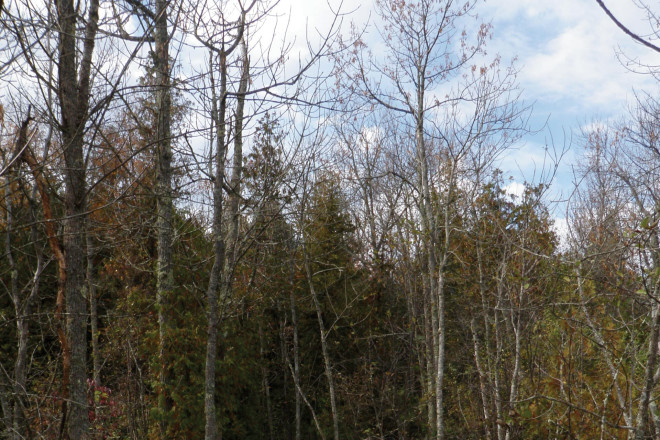 Photo courtesy of the WDNR. 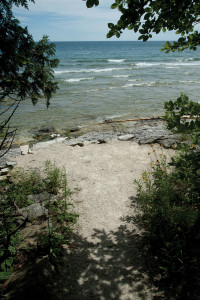 unspoiled gems:  Whitefish Dunes State Park. The park is known best for its pristine sand dunes gracefully sloping into one of the most magnificent beaches the Door Peninsula has to offer. To characterize it as such solely, however, would be doing the park a disservice. Stepping away from the shore on the park’s Brachiopod Trail will transport visitors into an unsullied wilderness rich in biodiversity, geological history and, simply put, autumn beauty.

Mike Madden, volunteer naturalist at the park and retired Sevastopol teacher, recalls the construction of the trail:  “The trail started in the mid-1990s, when the beach was closed because the water was so high. [Virginia Haen, the naturalist, and Al Miller, the park manager] had been working on a nature trail for about five years and had part of it laid out. When I came on board that summer of 1994, they had me expedite the process because people couldn’t use the beach.”

What Madden and his team finished designing and then constructed is a beautiful 1.5-mile loop (map) that leads hikers through seven different habitats of the park. The trail is mostly level, gravel, and wheel-chair accessible making it something which hikers of all ages and abilities can enjoy. It is also self-guided and, with a booklet available at the nature center, visitors can stop and interpret 16 stations along the way to learn about the park’s geology, flora and fauna.

The Brachiopod Trail gets its name from the two-shelled marine animal that once called the Silurian Sea that covered Door County millions of years ago its home. The trail begins near the shelter and picnic area. The first station on the self-guided tour is difficult to miss:  it’s a rock wall embedded with fossils found around the peninsula that are clear evidence of the ancient warm water sea that covered the area. The spot that hikers stand on at the start of the trail was an ocean floor about 425 million years ago. 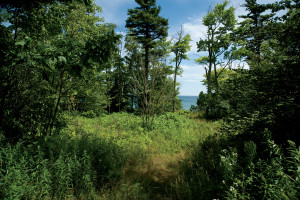 The trail departs eastward along the shoreline, shaded by white cedars and accompanied by the gentle rumble of Lake Michigan’s waves. Cedars are a tree that don’t need a great deal of topsoil to grow and can attach themselves easily to rocks, making them one of the more common trees in Door County, known for its rocky soil. Along this part of the trail, fall hikers should also look for the clustered goldenrod along the forest floor. The trail makes its second stop at a rock shelf overlooking the lake, where Madden notes it would have been common for Native Americans of the area to spearfish sturgeon.

Then, heading northward and inland, the trail is lined with thimbleberry bushes and the flowering plant yarrow (Achillea millefolium) which derives its name from the ancient Greek legend of Achilles and has been used medicinally throughout history for staunching blood flow.

The third and fourth stops along the trail speak to the nature of the soil in Whitefish Dunes. At the third stop, hikers will notice how shrubby and relatively open the landscape seems. This is attributed to shallow soil layers of the Door Peninsula due, in part, to glaciers a mile or so deep scraping the land multiple times over the last millennia. The rocky soil makes it difficult for trees to put down roots; in turn, the trees grow until their root systems cannot support them and high winds blow them down. 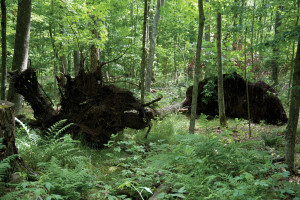 Along the way, hikers will notice various “tip-ups,” or uprooted trees whose root system is exposed. Often, large rocks will still be embedded in the root system, exhibiting the county’s characteristic soil.

This part of the trail is ideal for birdwatchers who can listen for the Ovenbird and the American Redstart, or notice the handiwork in the trees of the Pileated Woodpecker. The blazing reds of the elderberry bush along the trail complement the deep reds and oranges of the canopy above hikers. Sugar maples are plentiful in this area, making it one of the most glorious spots for enjoying fall foliage along the trail.

Make note of the Sugar Maples and American Beech trees that form the roof of this part of the forest at stations five, six, and seven along the way. Along the forest floor, hikers may notice beech nuts, whose spiny covering opens after it drops from the tree. Additionally, a skilled eye may notice the baneberry plant along the trail, whose distinctive white berries earned it the name “doll’s-eyes” for their uncanny similarity to an antique doll’s porcelain eyes. Do not sample the berries, though; they are highly poisonous and can bring on cardiac arrest in humans. 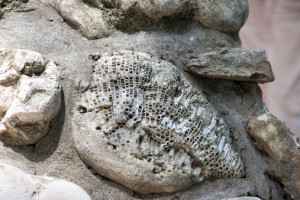 A unique sight awaits hikers at station eight:  a fenced-off depression in the ground formed over a fissure in the bedrock. The opening in the earth expands when water drains into it and causes erosion. The depth seems to go on and on, and this station truly shows the nature of the county’s bedrock. This is also a terrific place to notice the herbaceous plants covering the forest floor. Rattlesnake Fern, sarsaparilla, and trillium are all a part of the diverse forest community of Whitefish Dunes State Park.

After crossing the blacktop road, hikers may notice a significant ridgeline of rocks at station nine which indicate an ancient shoreline, caused by glacial melt-off and a rise in Lake Michigan. Historically, lake levels have varied up to 60 feet, causing this ridgeline.

A definite highlight for the entire trail is station 10, the wetland. A boardwalk bisects this pristine spot, and the wildlife is abundant. If hikers are quiet as they approach, they may chance upon a Great Blue Heron, Wood Ducks, frogs, dragonflies, or turtles. A bench in the middle of the wetland provides a peaceful resting spot to take in the beauty. 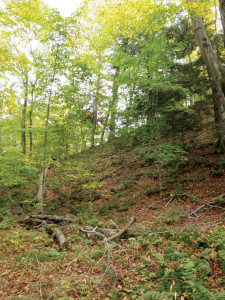 Photo courtesy of the WDNR.

The trail meanders south pausing to inform hikers about a unique white cedar (station 11), tree “legs” (station 12), and the network of club mosses on the forest floor (station 13). Each stop provides an insightful peek into the complex forest community.

As hikers approach the end of the trail, they’ll certainly notice the rising of the sand dune in front of them. After being in the flat, quiet area of the park, this dune to the right of the trail speaks to the awesome power of time and wind at work upon the shoreline.

The final stations along the trail point out how the landscape has shifted gently to a sandier area, although dunes can be found in forested areas of the park as well. This full-circle sensation truly gives explorers of the park a very round and complete sense of what Whitefish Dunes State Park has to offer:  a diversity of wildlife, a vast geological history, and a beauty visitors are unlikely to match elsewhere on the peninsula.