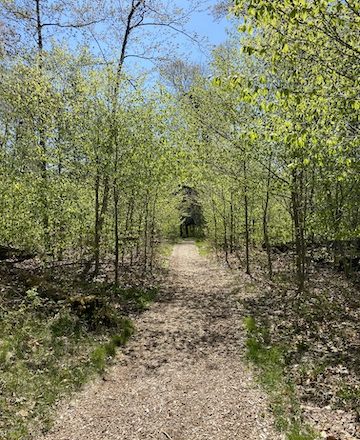 What some people may not know is that Whitefish Dunes State Park boasts inland trails that are just as beautiful as those that lead to the beach. Photo by Maddy Schierl.

Whitefish Dunes State Park is known primarily for its sandy beaches and stunning lakeside views. The park was established in 1967, and in 1982, 230 acres of its total 867 acres were designated as a state natural area. On the lakeside, the dunes are open, sandy and home to common milkweed, beach wormwood, beach pea and several species of beach grasses.

What some people may not know is that Whitefish Dunes State Park boasts inland trails that are just as beautiful as those that lead to the beach. And when the water is high – as it is now – the inland trails are easier to hike anyway. The Yellow Trail is one such beautiful hike, traversing 4.2 miles of dunes and red-pine plantations.

As you move farther from the lake, the dunes become more stabilized and more densely wooded. Although the elevation does change frequently throughout the hike, the change is never abrupt. Instead, the trail rolls up and down the gently sloping dunes.

The trail threads in and out of alternating landscape. In the woods, the atmosphere is cool and sheltered. The trees arch overhead like a leafy ceiling, and the sunlight is muted as it filters through the trees. The landscape changes drastically in some areas as the trees thin out and the trail moves into open, arid areas of sand. In sunny areas, small blossoms of wild strawberries dot the ground underfoot. In the wooded areas, birds flit in and out of the trees.

Although the Yellow Trail does not offer dramatic views of Whitefish Bay, its considerable appeal lies in all the subtle details of its vegetation and terrain.